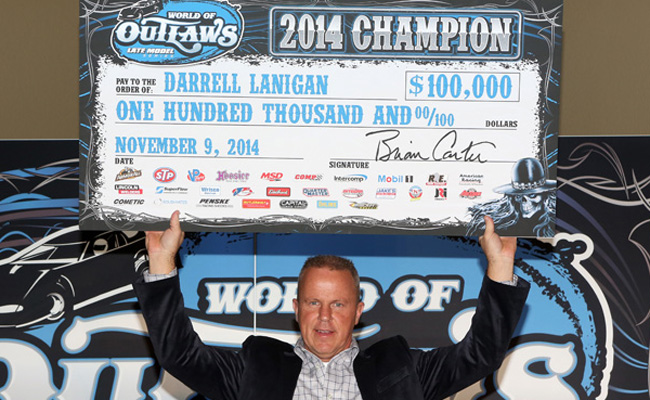 CONCORD, N.C. – Nov. 9, 2014 – Darrell Lanigan’s record-setting season on the World of Outlaws Late Model Series officially came to a close on Sunday night when the 44-year-old Union, Ky., driver was crowed champion of the prestigious national tour during the World of Outlaws Night of Champions Awards Banquet at the Great Wolf Lodge.

In celebrating a WoO LMS record 17 victories, Lanigan accepted the champion’s ring and trophy – along with a $100,000 points-fund check – during the annual awards night. On the same weekend he wrapped up his stellar season with a victory and a top-five during the Bad Boy Buggies World of Outlaws World Finals just down the street at The Dirt Track at Charlotte, Lanigan was honored for becoming just the second three-time series champion since the tour’s modern era began in 2004.

“It’s been a phenomenal year. We topped our record. I didn’t think we’d break 15, and we got 17,” said Lanigan, whose previous WoO LMS titles came in 2008 and 2012. I wish everybody could have this kind of year because it makes it easy to keep going and go to the next race winning like we did.”

Lanigan’s 2014 WoO LMS campaign was nothing short of amazing. He was nearly unstoppable on the series on his way to breaking his own record for the most WoO LMS wins in a single season that he set with 15 wins in 2012. His points-fund check pushed his 2014 total WoO LMS earnings to $390,050.

After climbing to the top of the series championship points chase just five races into the season, Lanigan never relented in leading the way for the remainder of the tour’s 37-race schedule. Along with his 17 victories, Lanigan tallied 33 top-five and 34 top-10 results while finishing every race. He topped the tour’s points chase by a modern-era record 328-point margin over runner-up Rick Eckert of York, Pa.

Lanigan’s accolades didn’t stop at series champion. In the first year for his new Club 29 Race Cars, Lanigan – along with Club 29 co-designer Ronny Stuckey – claimed the WoO LMS Chassis Builder of the Year Award. Along with Lanigan’s 17 victories, Jimmy Owens of Newport, Tenn., drove a Club 29 car to three triumphs for a total of 20 WoO LMS wins on the season for the fledgling chassis brand. In winning the award, Club 29 joined Rocket Chassis as the only chassis to win the award since the WoO LMS was relaunched in 2004.

“It’s definitely been fulfilling,” Lanigan said of his successful first season as driver and chassis builder. “It definitely was a phenomenal year. Nobody really thought it would’ve turned out like it did, but it did. It’s just unbelievable.”

During his acceptance speech, Lanigan thanked his sponsors, his fiancé Erin, crew chief Jason Jameson and crew members Adam Logan and Richard Davis. He also used the banquet as an opportunity to make a major announcement: his Lanigan Autosports program will operate as a two-car team in 2015 with Jameson being tabbed to drive the team’s second Club 29 race car.

“I see a lot of myself in him and that’s one reason I’m giving him the chance to have good equipment and good motors and good people behind to help him out,” Lanigan said of Jameson, who was also recognized during the ceremony as the WoO LMS Crew Chief of the Year based on a vote of fellow tour crews. “My father gave me the opportunity that I got, and when I see special things in young people, I want to give them the same opportunity. I see things in Jason that he’s definitely got the talent to do it. I just want to give him the chance to do it and see what happens.

“It’s definitely hard to top a season with 17 wins, but hopefully we can get two cars and hell, we’ll try to win every one of them.”

Tim McCreadie of Watertown, N.Y., bagged three victories on his way to finishing third in the championship chase. The 2006 WoO LMS champ recorded 18 top-five and 27 top-10 finishes. His $40,000 in points-fund cash gave him a total season’s earnings of $192,050.

Second-year WoO LMS competitor Morgan Bagley of Longview, Texas, rode four top-five and 19 top-10 finishes to a fourth-place finish in the standings, earning a total of $110,560 when accounting for his $35,000 in points-fund money.

Veteran Bear Lake, Pa., driver Chub Frank rounded out the top five in the 2014 points, accepting a $30,000 points-fund check for a total of $105,840 earned on the season. Frank’s top-five points finish came by virtue of a tiebreaker with 2013 WoO LMS Rookie of the Year Eric Wells of Hazard, Ky. Per WoO LMS rules, Frank won the tiebreaker by having more runner-up finishes than Wells since neither driver won an A-Main this season.

Wells settled for sixth in the championship standings, matching his points finish during his WoO LMS rookie campaign in 2013. Wells earned a points-fund check of $25,000.

Along with his eighth-place points finish, Heckenast was also recognized as the 2014 Rookie of the Year presented by ButlerBuilt. The first-year series traveler recorded two top-five and 14 top-10 finishes to claim the rookie crown over Junghans and 11th-place points finisher Boom Briggs of Bear Lake, Pa. Heckenast took home an extra $10,000 for his top rookie award.

Cornett Racing Engines was named the winner of the 2014 WoO LMS Engine Builder of the Year award, which was determined through the DIRTcar Horsepower program. Among the Kentucky-based engine builder’s successes this season was powering Lanigan to his 17 victories with no engine failures on the season.

WoO LMS director Tim Christman announced that the tour’s 2014 Promoter of the Year Award winner was Charlie Page of Selinsgrove Speedway in Selinsgrove, Pa., which hosted the WoO LMS for two events over Labor Day weekend in 2014.

Other special awards handed out during the banquet included:

* The $500 DirtonDirt.com Hard Charger Award, which went to Wells. He picked up the most positions in WoO LMS A-Mains this season, advancing 151 spots to beat Bagley by 14 positions.

* The DirtonDirt.com WoO LMS Social Media Superstar Award, a $1,000 prize that was presented to Bagley. The sophomore WoO LMS competitor was selected by fans in a contest conducted on social media during the World Finals.

Christman announced intentions to release the full 2015 WoO LMS schedule in the coming weeks. A limited number of events have already been released, including seven series events in Georgia and Florida in February. The season is scheduled to kick off on Feb. 6-7 with the running of the Winter Freeze event at Screven Motor Speedway in Sylvania, Ga. The tour will then head to Bubba Raceway Park in Ocala, Fla., from Feb. 14-15 and Volusia Speedway Park in Barberville, Fla., for the 44th annual UNOH DIRTcar Nationals from Feb. 19-21.