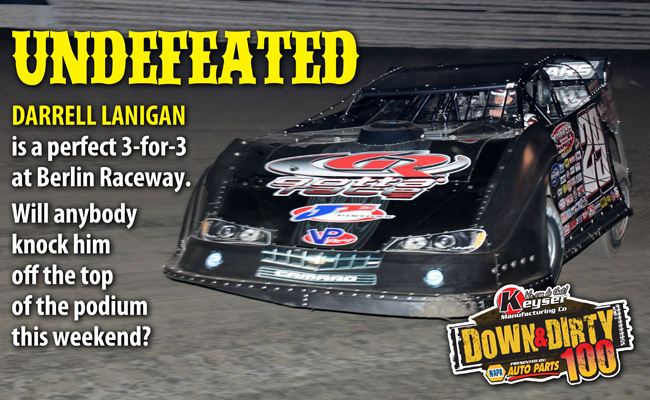 MARNE, Mich. – Sept. 16, 2015 – How confident must Darrell Lanigan be heading into the Fourth Annual Keyser Manufacturing Down & Dirty Weekend presented by NAPA Auto Parts on Friday and Saturday at Michigan’s historic Berlin Raceway?

Shane Clanton, though, is trying to close out his first Outlaw championship, and after Lanigan it’s Clanton who has been the toughest racer over the previous three years of races at Berlin. Clanton, of Zebulon, Ga., has finished second, third and fourth at Berlin, and is having the best year of his career with 10 wins and 32 top-five finishes in 38 starts.

Rick Eckert just won the Firecracker 100 and takes aim at Lanigan’s streak knowing he’s finished on the podium in two of the three races at Berlin. Eckert, the 2011 series champion from York, Pa., finished third in each of the first two running’s of the Outlaws event at Berlin.

Lanigan, Clanton, Eckert and all of the Outlaws will race at Berlin in a 40-lap, $8,000-to-win event on Friday night followed on Saturday by a 60-lap, $12,000 main event. In addition, Kenny Wallace will join the Michigan Dirt Cup Modifieds to make each night even bigger.

The first green flag of the weekend is scheduled to wave at 6:30 p.m. on Friday night. Adult tickets are $20 on Friday and $25 on Saturday, with kids only $5 and children 7-and-under FREE.