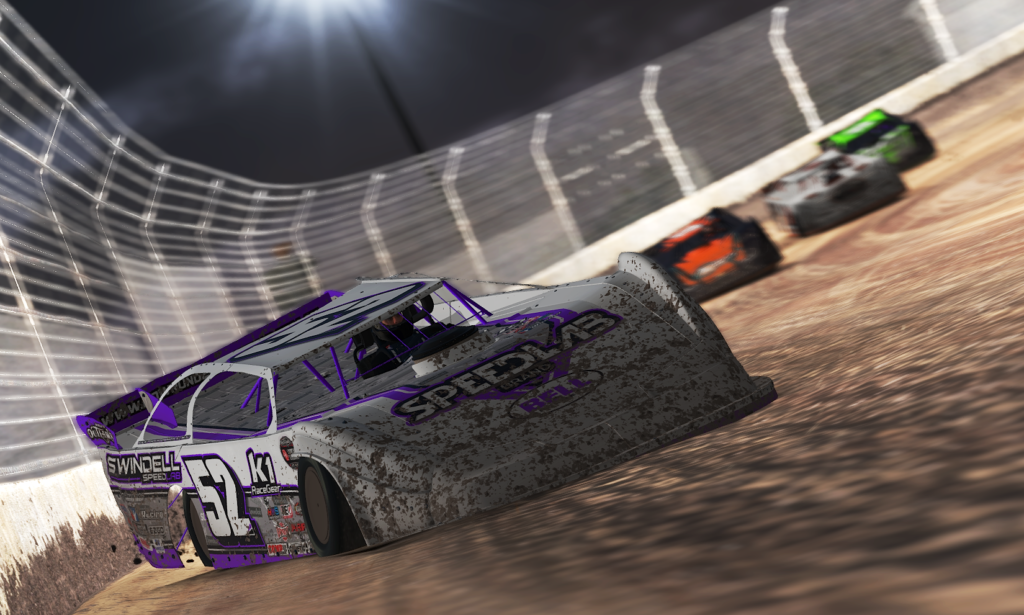 James Edens scored his first points-paying win in the iRacing World of Outlaws Morton Buildings Late Model World Championship on Monday night, conquering the quarter-mile bullring at Kokomo Speedway to become the fifth different winner in six races so far in 2020. Edens, who joins Dylan Houser as the second driver to win both Sprint Car and Late Model World Championship races this year, took full advantage of the first restart of the race to pass a previously dominant Dylan Wilson and never looked back.

Wilson held on for second, but most importantly, took advantage of an off night for Hayden Cardwell to take the championship lead for the first time with just four races remaining. Kevin Dedmon returned to the podium for the first time since last season in third, with Alex Bergeron and Devon Morgan completing the top five.

At first, it looked to be Wilson’s night, as the series rookie rode a wave of momentum into Kokomo by qualifying second, winning his heat, and getting comfortable in the lead of the 50-lap feature despite three and four-wide racing throughout the night. But after second heat winner Joel Berkley got into Brandyn Proudfoot for the only caution of the night, Edens took full advantage of the reset, making the decisive pass and extending a lead of over a second by race’s end.

While the Swindell Speedlab Esports driver had already won the preseason exhibition race at Volusia Speedway Park in June, the Kokomo win allowed him to join an exclusive club of drivers who have won official races in both classes. Bergeron was the first to accomplish the feat in 2018, while Houser’s win in the Sprint Car finale from Charlotte earlier this year made him only the second driver to ever accomplish the feat.

With four races remaining, though, the focus remains on the three-way title fight between Wilson, Cardwell, and Evan Seay. All three drivers finished seventh or better, keeping the gap between them to a slim 14 points even as the championship lead changed hands. If any of them (or all three) miss a feature event, meanwhile, Morgan and Kendal Tucker remain within mathematical striking distance in fourth and fifth in the standings.

The iRacing World of Outlaws Morton Buildings Late Model World Championship season continues with its second quarter-mile track in a row next Monday at Fairbury American Legion Speedway. As always, the race will stream live at 9PM ET/6PM PT on the iRacing eSports Network on Facebook, Twitch, and YouTube. For more information on iRacing and for special offers, visit www.iracing.com.