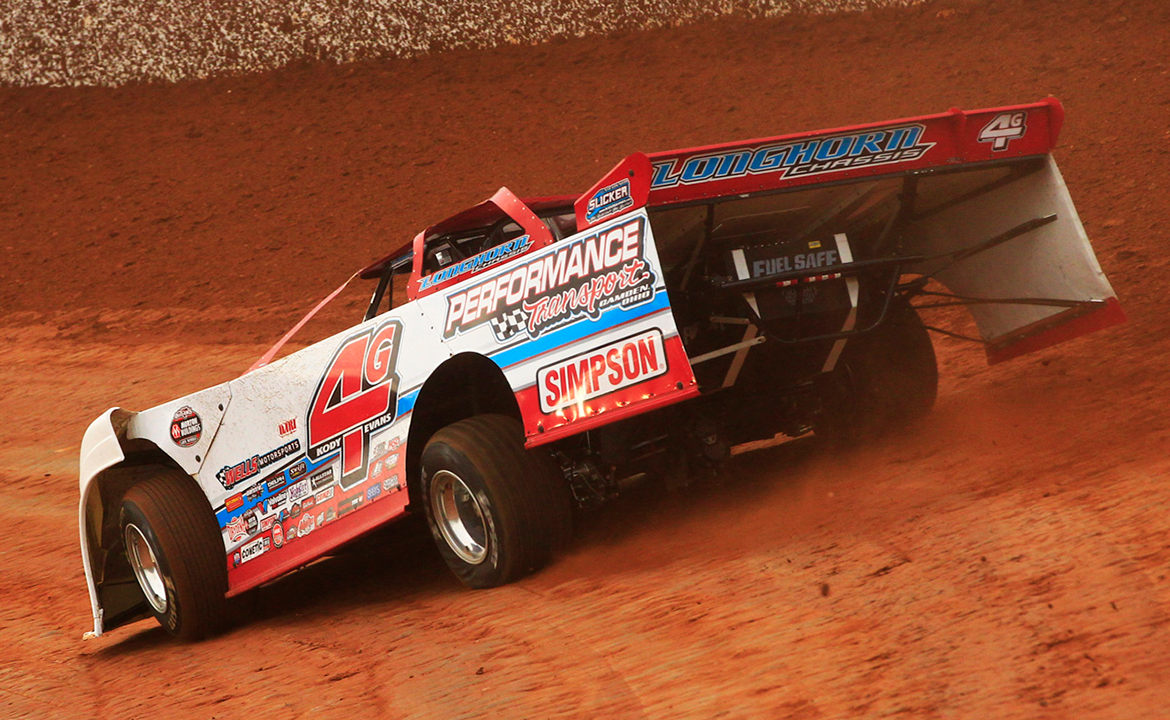 CONCORD, NC – Only 34 days remain until the 2020 World of Outlaws Morton Buildings Late Model Series season kicks off on Jan. 3 at Vado Speedway Park for the inaugural Battle at the Border, and the second entry aboard the full-time roster chasing the Rookie of the Year title has begun his preparations for the new season.

“I’ve got four years under my belt now,” Evans said. “I think everyone dreams of doing it, but not many people get the opportunity. And if I have the means of doing it this year, I want to take advantage of it.”

“Whether we’re ready 100% or not, I would hate to, next year or the year after, have something be wrong and us not have the ability to do it and miss that opportunity.”

At just 21 years of age, it’s already been somewhat of a long and winding road to the spot he’s in now. Evans began his career on pavement, launching an 8-year stint in go-karts at age five. A family friend got him a testing session in an Asphalt Super Late Model at Hickory Speedway in Hickory, NC, which led to the purchase of his own equipment that he raced here-and-there at 14 years old. By 15, he was a full-time competitor on the Champion Racing Association All-Stars Tour for Asphalt Crate Late Models before switching back to Super Late Models in 2015.

With economic factors in mind, Evans and his father soon made the decision to trade-in their asphalt endeavors to see what the Dirt Late Model racing community had to offer them. They hit the dirt full-time in 2016, switching between Crates and Supers, after a few starts the year before and decided to take it to the next level for 2017. All-new equipment and an all-new outlook on the team’s racing journey bred 7 Feature wins in local competition that year and a track championship.

After a few years of racing experience on both sides of the fence, Evans said he prefers dirt far more than asphalt, though he learned a lot from his experiences on the blacktop.

“Most of the dirt guys won’t think twice about coming over and giving a young guy some pointers,” Evans said. “It’s just really nice racing with all the guys on dirt. It’s a lot better atmosphere, and the fans are phenomenal too.”

When he’s not at the track or in the shop, Evans is tending to the family business, Performance Transport. The trucking facility located in his hometown of Camden, OH, helps fund the race team and keep the equipment up to date. He has his own Class-A CDL, which helps both the trucking business workflow and the racing team get up and down the road in the hauler.

Each new rookie talent has a mentor or two that they can turn to at times of difficulty throughout the season. This year, Evans made a friend in 2013 World of Outlaws Rookie of the Year Eric Wells and will have the Hazard, KY-native on the side of the car and in his corner in 2020 for technical assistance.

Evans began 2019 driving a different chassis that he said he struggled with early on. A quick call over to Wells Motorsports set up a deal for the two to get a brand-new Longhorn Chassis done in time for Evans’ next race in Ohio. They spent all week in Wells’ shop preparing car and formed a great professional relationship by the time their work was done.

“Eric and I hit it off really well, I consider him one of my really good friends,” Evans said. “We talk two or three times a week, sometimes not even about racing. It helps a lot, getting his help. I can call him when I’m at the racetrack and he’s not busy. It’s turned into more of a friendship than me being a customer.”

At the track, Evans is as hands-on as they come. He’s learned a lot about the inner workings of his chariot from getting his hands dirty and taking charge of the adjustments on race day.

“I pretty much do all the setup stuff myself and with the help with a lot of good people, the guys at Longhorn [Chassis], especially Eric Wells Motorsports,” Evans said.

“You can’t assume anything on these cars. You have to check so much and it’s so easy to get lost with your racecar. These things require so much maintenance and they’re so precise. If you’re off just a little bit, especially at the national level, if you’re off just a tick on the racetrack it’s going to make it look like you’re out to lunch.”

A bunch of these principles he learned just this year in some of the more high-profile Dirt Late Model races.

“Especially at Eldora this year, I’ve learned a lot and tried to focus on driving in dirty air because it’s so important when you get to big racetracks and it’s so hard to pass,” Evans said.

In 2020, he’ll use those things he learned this past season to better himself and meet the team’s goals for their first full season on the road.

“Really, my biggest goal is just to stay in that top 12 for most of the year and try to work our way into the top 10 in points,” Evans said. “Another big thing is just to finish as many races as we can and be better at the end of the year than we were when we started the year.

“We’re just going to get the experience, build a notebook for the following year and see what it’s all about, see if it’s what I really want to do for a living.”

Catch Evans and the rest of the Outlaws in the season opener on Jan. 3, 2020 at Vado Speedway Park for the first round of the inaugural Battle at the Border!

As always, fans can watch the 2020 World of Outlaws Morton Buildings Late Model Series season unfold LIVE from home with a Late Model FAST PASS subscription to DIRTVision and see the best Dirt Late Model racing all year round!