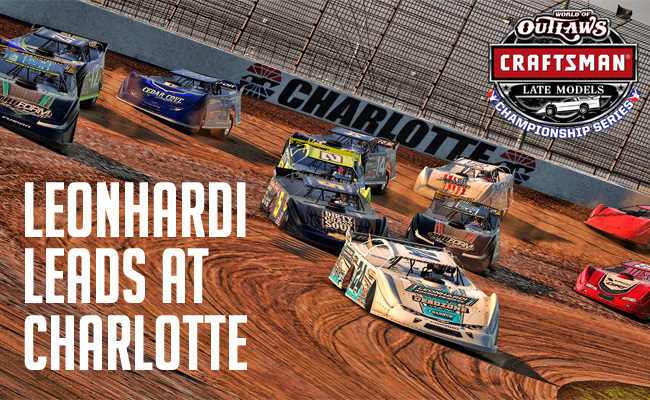 Championship Fight Picks up at Charlotte

iRACING — July 16, 2018 — The Dirt Track at Charlotte delivered another exciting championship event. Leonhardi took home his first win of the season, while the rest of the pack scrapped for second and back.

The three heat races went off without a hitch. While there wasn’t an overwhelming amount of passing, the racing was still very aggressive between the pack. Heat 1 saw Zach Leonhardi, Alex Bergeron, John Fidler, and David Heileman advance. In Heat 2, Drew Herchko, Dylan Houser, Casey Kirwan, and Phil Diaz moved on. Heat 3 let Kevin Dedmon, Charles Cosper, Nick Cooper, and Adam Elby get the direct pass to the Feature.

The Last Chance Qualifier was filled with fast names. The McKinneys, who finished first and second in Knoxville, were racing for a Feature grid slot. The same held true for points leader Howard Weaver. The Last Chance Showdowns have traditionally started with early drama as people are so aggressive, and Charlotte was no exception. The 52 of James Edens and 28 of Zak Rounds made contact halfway through the opening lap and pretty much killed their night right from the start. That incident strung out the majority of the field. The track still showed good development with the high and middle line both proving racy. Austin Carr, Austen Semmelmann, Matt McKinney, Mike McKinney, Virgil Graham, Marc Molnar, Howard Weaver, and Garrett Niebruegge qualified into the Feature.

The Feature race was where the nights action came to a climax. The track state had become so favorable for multi-lane racing that in the opening laps three-wide became the rule rather than the exception. The problem is when you put 20 Late Models on the semi-awkwardly-dimensioned Dirt Track at Charlotte, you will often get crashes, and that is what we had for the first half of the race. Race Control decided to implement single-file restarts, and this is where we saw some good runs. Out front Zach Leonhardi’s lead remained unchallenged even with all the resets. Alex Bergeron continually got beat on the green flag.

The final restart of the night would come with 13 laps to go. Drew Herchko and Dylan Houser would fight for the third spot. Herchko would make a mistake and tag the outside wall. This had him falling back to 9th by the finish. The highlight of the night came with 5 laps left. Austin Carr and Drew Herchko would make contact and stack up a string of cars behind them. Howard Weaver, who was 8th at the time, would take full advantage of this and was able to hook the cushion off of 4 and down the front straight. They went 4 wide into turn 1 and Howard was able to go from the top to the 3rd lane and get a run down the back straight, clearing 4 cars in a single pass and propelling himself to a top 5 finish after starting in 19th. In the end though the 24 of Zach Leonhardi would lead every single lap to win his first race in the World Of Outlaws Craftsman Championship series.

The next round of the Late Model Championship series will be on July 30th as they return to Volusia Speedway Park. Before then, on July 23rd, the Sprint Cars take to the famous Williams Grove Speedway. Be sure to catch all the action at 9PM eastern time.

RESULTS FROM THE DIRT TRACK AT CHARLOTTE

POINT STANDINGS AFTER THE DIRT TRACK AT CHARLOTTE, JULY 16