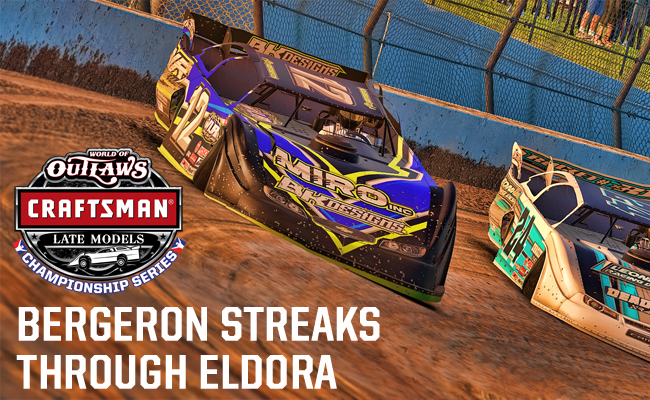 The #12 of Alex Bergeron snagged the first bragging right by qualifying on the pole. Teammate Howard Weaver was able to stay within a second of him in the first heat, with Matthew McKinney only a few tenths back in third. Casey Kirwan in the 14 moved up 4 spots from 8th to transfer directly to the feature. This was one of the largest runs through a heat race to make the show thus far this season.

Zach Leonhardi took the win in the second heat by the most comfortable margin of 1.1 seconds. This was also one of the best heats of the season with all 9 cars separated by 4.5 seconds. There was a lot of passing and slide jobs being thrown with drivers often swapping positions. At the end of the 8 laps, it was Jacob Leverstein, Mike McKinney, Austin Carr who took the 4 transfer spots.

Comebacks were a plenty in the third heat. John Fidler was tightly pressured by Austen Semmelmann for all 8 laps, with Semmelmann only finishing 5 tenths off of Fidler. It was Joshua Laughton though who was busy working through the field, nearly matching Kirwans performance by picking up 3 spots from 7th to snag the last transfer spot. Justin Thomas took 3rd place to transfer as well.

As the heats were happening it was becoming very evident we would be seeing cars running up against the wall all night. Because of this, the upper groove got very slick and bumpy and while it was fast it was treacherous. More than a handful of cars went in too hot and slid into the outside wall in the 50 lap feature. This included some of the leaders.

Alex Bergeron led the first few laps from the pole but didn’t stay there for a long. A slight hiccup gave Leonhardi a run and he was able to pickup the lead a few laps in. Alex kept him honest though and did not allow him to get a big lead. A bobble from the 24 gave Alex the lead, but Zach was unable to settle into second place. He got shuffled back to third and a mid-race restart put him offline which really hurt. The outside line got a fantastic jump and Zach dropped 3 or 4 spots. The 07 of Howard Weaver and 115 of John Fidler were the drivers who seemed semi capable of keeping up with Bergeron. In the final 10 laps Howard was able to get the gap down to just a few tenths, but close to 10 laps of work was erased with a slight bobble off of 2 giving Alex a nearly 1 second lead. A late race restart meant Alex was not out of the woods just yet. If Howard could time the start he could potentially hook up the cushion and drive right around Alex, similar to what Bergeron did to Nick Cooper at Limaland. However Alex chose a good time to go, and was able to have the full track to himself into turn 1. That was enough, and just a few laps later Alex won his third World Of Outlaw Craftsman Championship Series race in a row.

Howard Weaver kept up his string of awesome runs as well with a second place finish keeping himself in the points lead. He has yet to finish outside the top 4 in the Late Models and has a worst finish of 7th in the Sprint Cars. No one else has showed this same consistency across the 2 series, except arguably Bergeron. Howards patient style, specifically in the Sprint Cars, has allowed him to be a force to be reckoned with.

Zach Leonhardi also showed he can be a contender as well.

Weaver, Leonhardi, and Bergeron are the early standouts in the Late Models being the only drivers with multiple top 5’s on the season thus far.

The real question is can anyone break Alex’s streak? He has looked nearly picture perfect. The next opportunity the competition will have is on June 25th when the World Of Outlaws Craftsman Sprint Car Championship Series rolls into Knoxville. Racers and fans alike are expecting a fantastic show. Be sure to catch it at 9PM Eastern streamed live by Racespot TV on DIRTVision and on iRacing Live.