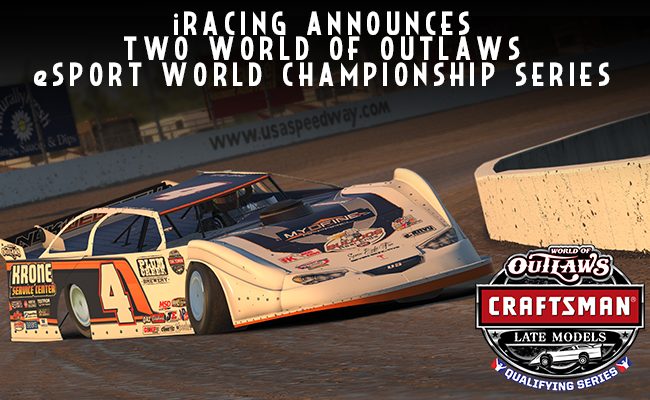 iRacing, the leading online racing simulation has been sanctioning professional eSport racing series since 2010, and recently added dirt racing to the online service. The addition of these two World Championship level series shows iRacing’s commitment to being the leader in racing eSports.

The World Championship series will be broadcast live at www.iRacing.com/live and www.dirtvision.com on Monday nights – alternating between the two series, beginning on May 7th and ending on October 29th.

“World of Outlaws has been a great partner of iRacing and provided significant assistance and resources as we developed dirt racing. It’s great to have their continued support for this exciting new series that will feature the world’s best online dirt racers,” said Tony Gardner, president and CFO, iRacing.com.

“We’re excited to see our premier series play out in the digital space with the best eSport drivers in the world,” said World of Outlaws Chief Marketing Officer Ben Geisler.  “It’s the next step in our ongoing partnership with iRacing, and we hope to encourage continued crossover between the simulated dirt racing world and the real life experience.”

To learn more about iRacing and to take advantage of special offers go here: http://iRacing.com

About World Racing Group
The World of Outlaws Craftsman® Sprint Car Series and Late Model Series are the premier dirt racing series in the world, featuring the most world class drivers. Founded in 1978 by the late Ted Johnson, the World of Outlaws tours invades racetracks and thrill fans in more than 25 states while sanctioning nearly 150 events at some of the most famous dirt racing facilities in the world