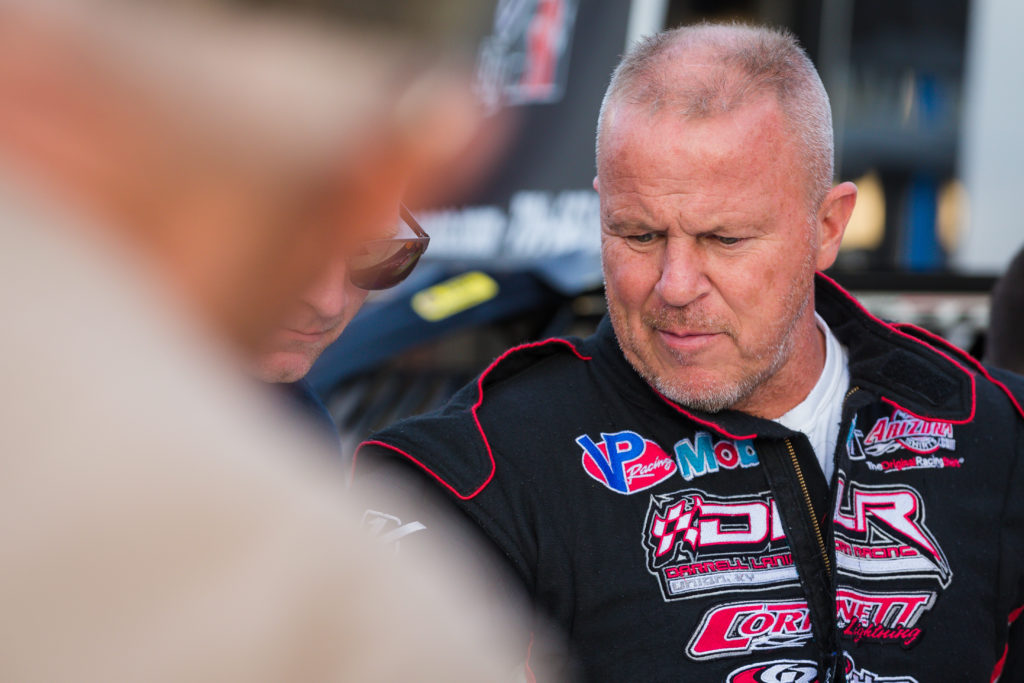 Put those pencils away, there will be no re-writing the record books this week.

After a string of five victories in five starts, Brandon Overton of Evans, Ga. entered Saturday’s showdown at 411 Motor Speedway with a shot at history and a six-for-six run on the line. However, Big Sexy’s flame ran out and the hot streak was stalled at five wins due to a ninth-place finish at the Seymour, Tenn. track.

It’s the third time over the last two seasons that a driver has went streaking for five consecutive wins, but in each occurrence, the record-tying sixth straight victory has proven to be too elusive.

The man they’re all chasing? Darrell Lanigan of Union, Kentucky, who rattled off six straight in the summer of 2012.

The 2012 season was an all-around record-breaking championship campaign for The Bluegrass Bandit with 15 wins, 27 podium appearances, 33 top five finishes and 37 top ten results (all records at the time) in 40 starts with the World of Outlaws Morton Buildings Late Model Series. Particularly though, it was his summer stretch that captivated the nation.

Recording six straight wins throughout July and August, the driver of the No. 29V went to victory lane in Canada, Minnesota, North Dakota, Wisconsin, and Iowa. Earning more than $100,000 in a 27-day stretch, Lanigan built the foundation for a record that still stands nearly a decade later.

With his run, Lanigan dethroned Billy Moyer of Batesville, Ark. for the longest win streak in series history, which Mr. Smooth previously held at five consecutive wins in 1988 and 1989. His streak finally came to a halt on August 17, 2012 at Winston (Mich.) Speedway when he finished fifth-from-12th after a poor preliminary showing put him behind the eight-ball.

In 2019, when Brandon Sheppard of New Berlin, Ill. recorded the first five-piece since Lanigan’s 2012 record, it was so nice that he did it twice. That’s right, en route to his second career World of Outlaws Morton Buildings Late Model Series championship, The Rocket Shepp tallied two different five straight streaks at the beginning and mid-point of the season.

Tying the record for most wins in a single season, Sheppard and the Rocket1 Racing crew concluded that year with 18 victories in large part due to their streaking prowess.

He proved to be the closest contender to tying Lanigan’s mark, as both of his streaks were snapped by second-place finishes to Jimmy Owens at Smoky Mountain (Tenn.) Speedway on March 23, 2019 and Shane Clanton at Ogilvie (Minn.) Raceway on July 13, 2019.

Most recently, Overton’s career year in 2020 offered him a run of five straight wins with the World of Outlaws Morton Buildings Late Model Series. Tallying $86,000 over the near two-month stretch with wins in Wisconsin, Georgia and South Carolina, Big Sexy’s stretch was highlighted by his first career title at Cedar Lake’s USA Nationals in August.

He had a shot at tying Lanigan’s all-time record on Saturday night at 411 Motor Speedway, but a costly heat race result relegated him to the 16th-starting spot in the feature, which he then transitioned into a ninth-place finish.

The next remarkably great win streak could begin when the World of Outlaws Morton Buildings Late Model Series hits the track next in two weeks. Don’t miss The Most Powerful Late Models on the Planet at Kokomo (Ind.) Speedway for the $25,000-to-win Hoosier Dirt Shootout on Friday, October 23 and then at Federated Auto Parts Raceway (Mo.) at I-55 on Saturday, October 24.