Heckenast, Junghans and Overton Look to 2016 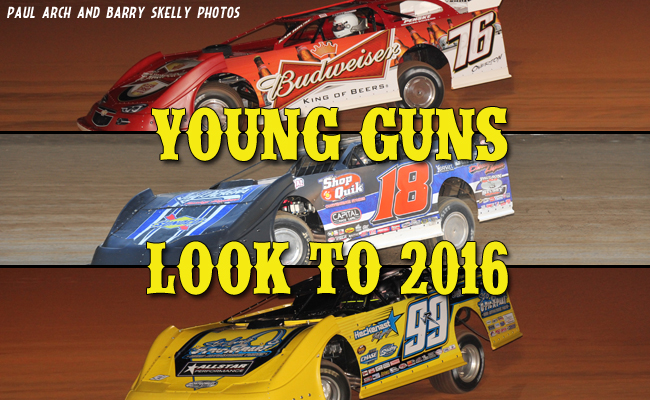 CONCORD, N.C. – Jan. 26, 2016 – Frank Heckenast Jr., Chase Junghans and Brandon Overton have quickly established themselves as future stars in the World of Outlaws Late Model Series. With an average age of just under 25 years old, these three young guns have their eyes set on Screven (Ga.) Motor Speedway Winter Freeze VI, Feb. 12 and 13, as the first crucial step to compete for the 2016 series title.

Heckenast, the elder of the three at 27 years old, will begin his third full-time season with the World of Outlaws in 2016. He scored one win, eight top-five finishes and 17 top-10 finishes in 2015, with an eighth place position in the final standings.

Heckenast captured his first career series victory early last season when he won at Bubba Raceway Park in February. This season, he has his hopes set on capturing a different prize during the same month.

“I really want to come home with a ‘Gator’ this year,” Heckenast said, referring to the trophy given to the winner of the DIRTcar Nationals at Volusia Speedway Park. “I really just want to win another Outlaws’ race. I’m not one of these guys that says they want to win ten races – you have to win the first one before you win the tenth one. But I think a win will start off the season nicely…if we can get the first win, it will roll into the next.”

The youngest of the three, Junghans at 23 years old, completed his second full-time season with the World of Outlaws Late Model Series finishing seventh in the standings, improving on his 10th place finish in 2014.

“I plan on running the whole World of Outlaws deal again,” Junghans said. “It’s hard not running it when I like travelling and racing with those guys.”

Junghans, a native of Manhattan, Kan., secured his lone victory of 2015 at Lernerville Speedway on the second preliminary night for the Firecracker 100 in June. Junghans capped off the season with eight top fives and 19 top 10s which were both improvements on 2014.

“I just want to try to do better than I did last year,” Junghans said. “I hope we have a shot at the championship this year, but I don’t expect to go out there and dominate. Those guys have been doing it long enough, they have paid their dues, but I feel like I can compete with them.”

Competing in his first full-time season with the World of Outlaws Late Model Series, Overton scored six top fives and eight top 10s on his way to finishing 10th in the points and being named the 2015 Rookie of the Year.

The 24-year-old from Evans, Ga. started 2015 off strong, grabbing two of his top-five finishes in the first two races of the season at Screven. This year, Overton hopes to top his Screven results.

“Last year was definitely a learning experience for me,” Overton said. “You have to be prepared, that’s the biggest thing. That’s what I have been doing all winter. We got two new chassis from Billy Moyer, as well as another motor… so we’re a little better off than last year.

“If I could go back this year to all the races I ran second or third in, and win those, then I would be good…but it’s not all about winning. You just have to run up front and be consistent then you will get your wins.”

The countdown to the 2016 World of Outlaws Late Model Series season continues with the Winter Freeze VI at Screven Motor Speedway just two weeks away. Heckenast, Junghans and Overton all have the same goal in mind: improving on their breakout 2015 campaigns and contending for the 2016 series title.