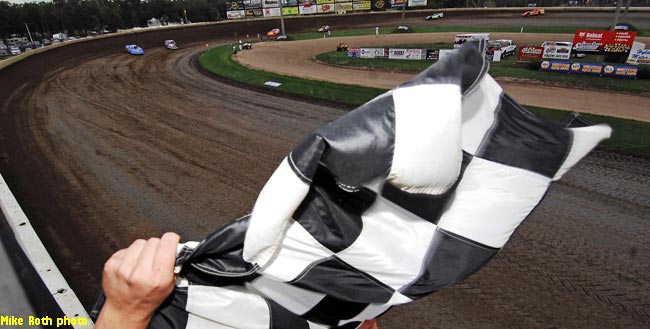 A dirt-track tradition for three decades in the state of Minnesota, the unique World of Outlaws Late Model Series event co-promoted by the Blooming Prairie (Minn.) Lions Club and Deer Creek’s Queensland family is set to run on a Saturday-night date for the first time in its illustrious history.

“There’s a real good buzz going around about the race because of the change to Saturday night,” said Deer Creek Speedway marketing director/event coordinator Ryan Queensland. “From talking to fans and racers, in my opinion, there’s a buzz about the Gopher similar to the first year that we moved it here (in 2005). Deer Creek Speedway is definitely going to be the place to be on July 7.”

The Gopher 50 has been a mid-week staple on the WoO LMS schedule since the three-eighths-mile Deer Creek oval became the event’s host facility. It has regularly drawn big crowds and produced memorable racing, but Deer Creek management and Blooming Prairie Lions Club member Jerry Ingvalson, who has overseen the race since its inception, believe that a weekend date can take it to another level.

“For the last few years we’ve met with our sponsors (NAPA and Miner’s Outdoor & Rec) and talked with the fans,” said Queensland, “and we’ve asked them, ‘Hey, what can we do to make the Gopher better – you know, make it a little more fan-friendly and kick up the atmosphere a little bit?’ What we heard back was, ‘If you ever could get that thing on a weekend, it would be awesome.’

“Well, working with (WoO LMS director) Tim (Christman), we were actually able to make that happen this year. We told NAPA and Miner’s that we had an opportunity to do the Gopher on a Saturday and they said, ‘Take that date.'”

According to Queensland, with both NAPA and Miner’s having “really grabbed the bull by the horns to help promote the Gopher through their avenues,” advance ticket sales for this year’s event are up nearly 25 percent over 2011. In addition, from a sponsor’s standpoint, NAPA and Miner’s expect to host a record number of customers and clients at the race; NAPA alone will entertain 150-200 people in a hospitality tent.

“Our big goal is to make this year’s Gopher 50 more of an event,” commented Queensland. “We have a lot of stuff planned for before and after the event – and hopefully a real good race breaks out during the show as well.”

Saturday’s pre-race festivities will begin at 11:30 a.m. with the extremely popular pork-chop ‘feed’ for all participating Late Model and USMTS Modified teams. There will also be a competitive Cornhole beanbag-tossing tournament at 12 noon ($20 entry fee per two-person team with a cash payback) to enhance the tailgating experience, and NAPA is putting on a post-race bonfire in the pit area to keep the good times rolling after the evening’s final checkered flag.

What’s more, fireworks and driver introductions will spice up the racing program itself, and NAPA has posted cash bonuses of $100 to all heat winners and $1,000 to Saturday’s feature winners in both divisions contingent upon the display of a NAPA decal on both sides of the victors’ cars. With the additional money, the WoO LMS Gopher 50 winner will receive $11,000.

“We’re real excited for the Gopher,” said Queensland. “We’re just want to have a fun atmosphere so that the fans and race teams enjoy the event even more.”

The WoO LMS regulars are certainly looking forward to their annual visit to Deer Creek. Every Outlaw who has raced at the well-manicured track has nothing but praise for it.

In fact, after the WoO LMS contested its 300th A-Main since 2004 last summer, the tour travelers who had entered all of those races – including defending champion Rick Eckert of York, Pa., current points leader Darrell Lanigan of Union, Ky., Chub Frank of Bear Lake, Pa., and Clint Smith of Senoia, Ga. – were asked to rank their 10 favorite tracks. Deer Creek made each driver’s top 10 list.

Consider the comments the WoO LMS stars made about Deer Creek:

* Eckert (’06 Gopher 50 winner): “They have a heck of a track crew. They work on that place all night long and keep it really racy. Anytime you go some place where they put that much effort into the surface and keep the place looking as beautiful as they do, you love that. And they feed us too (the pre-race pork-chop luncheon).”

* Lanigan (’05 and ’09 Gopher 50 winner): “Track-prep is definitely the big thing there – those guys go out and work on the track hard every night. I haven’t seen anywhere else in the country where they work as hard on the track as they do there.”

* Frank (’07 Gopher 50 winner): “For a racer, there’s no better place we go to. They have real good equipment and they take such good care of the racetrack. You never have to worry about whether the racetrack is gonna be racy.”

* Clint Smith (WoO LMS winner at Deer Creek in ’06): “One of the raciest tracks on the circuit. Over all the years we’ve gone there with the series, I don’t think there’s ever been a bad race there. It’s been the most consistent, most equal track we’ve been to.”

A healthy contingent of Deer Creek regulars is also expected with sponsorship providing the top 20 drivers in the track points standings a free entry for the event.

Deer Creek’s gates are scheduled to open at 3 p.m. CT on Saturday with on-track action set to begin at 6:30 p.m.

Reserved seats can be purchased on-line through Fri., July 6, at 5 p.m. CT at www.deercreekspeedway.com or by calling 1-877-DCS-RACE.

Additional info on the Gopher 50 can be obtained by logging on to www.deercreekspeedway.com or calling 1-877-DCS-RACE.