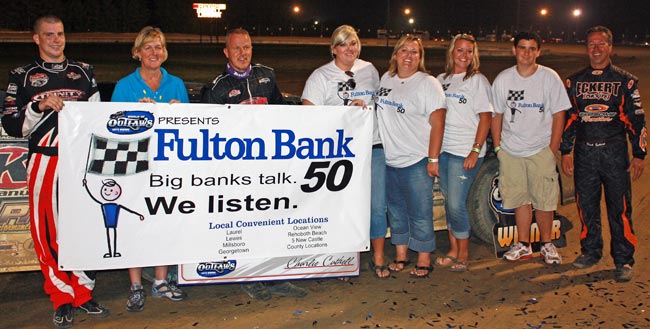 DELMAR, DE – May 28, 2013 – Being a customer of Fulton Bank will have its advantages when the World of Outlaws Late Model Series visits Delaware International Speedway on Thursday night (May 30).

As part of its title sponsorship of the Fulton Bank 50 for the third consecutive year, the financial institution that proudly serves the First State community will provide a race-night snack for many of its customers and up-close-and-personal access to the national dirt Late Model tour’s cars and stars for 100 of them.

With Fulton Bank officials also planning to have special giveaways for fans who attend Thursday night’s race, it’s clear that company has become a major supporter of the richest event of the season at the popular half-mile clay oval on U.S. Route 13.

“We are excited to once again be a part of the Fulton Bank 50 World of Outlaws Late Model Series race,” said Fulton Bank Delaware President Randy Taylor. “So many of our loyal customers and their families are a part of the racing community and come out to enjoy this action-packed event.”

Fulton Bank will have a hospitality tent set up behind the DIS grandstand to meet and greet fans throughout Thursday night’s racing program. The first 100 fans that stop by the area and show representatives their Fulton Bank Rewards Debit card will have their tickets upgraded to pit passes, allowing them to head over to the pit area to see the WoO LMS drivers and their cars.

In addition, Fulton Bank customers have had the opportunity to pick up coupons for a free hot dog on race night when they visit the firm’s branches in Delaware. Fulton Bank has six branches in Sussex County – the closest location to Delaware International Speedway being the Laurel, Del., branch at 30204 Sussex Highway (Route 13) – and five branches in New Castle, Del.

Delaware International Speedway’s gates are scheduled to open at 5 p.m. on Thurs., May 30, with hot laps set to begin at 7 p.m. Time trials and heat-racing will follow. The track’s Little Lincoln division will also be on the card.