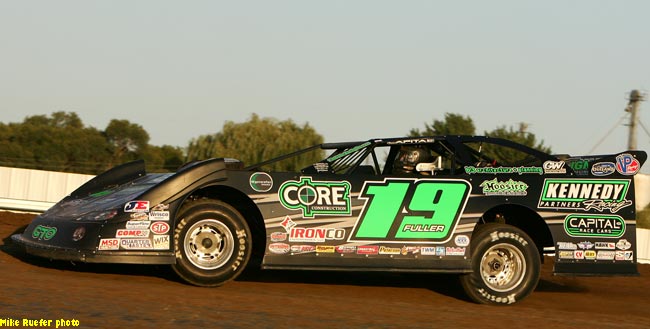 But make no mistake – there’s another race Fuller has on his to-do list during one of the country’s biggest short-track extravaganzas, which runs from Oct. 3-7 in central New York. He wants to stand in Victory Lane after the 50-lap World of Outlaws Late Model Series A-Main on Thursday night (Oct. 4) at Rolling Wheels Raceway Park.

“I would love to win that race,” Fuller said of the mid-week program at the five-eighths-mile Rolling Wheels oval, which hosts the WoO LMS during NAPA Super DIRT Week for the second consecutive year. “That’s a show I’m really looking forward to.”

Fuller, 44, of Watertown, N.Y., has reason to be excited about the NAPA Super DIRT Week satellite event. For starters, the race will mark his first WoO LMS appearance at an Empire State track he frequented as a DIRTcar big-block Modified regular since he joined the top-notch Kennedy Motorsports dirt Late Model team in late July. He also happens to run very well at the ‘Fast Track,’ owning multiple DIRTcar big-block Modified feature wins and recent WoO LMS finishes of fourth (2010) and fifth (’11) there.

A $10,000 triumph would end a long, frustrating winless streak on the World of Outlaws circuit for Fuller, a regular on the tour since his Rookie of the Year season in 2007. He has 12 career WoO LMS victories but last reached the checkered flag first 94 races ago, on June 17, 2010, at Merrittville Speedway in Thorold, Ont.

“It’s been way too long since I won an Outlaw race,” said Fuller. “Being close to home, Rolling Wheels would be a great place to get back on track.”

Fuller, of course, is just three years removed from a spectacular break-out 2009 campaign that saw him win seven WoO LMS A-Mains – including a then record-tying four in a row – and finish a personal-best fourth in the points standings. He won back-to-back races in 2010 at Can-Am Motorsports Park in Lafargeville, N.Y., and Merrittville before he slipped into an extended slump, hampered by a series of obstacles that included technological changes with his racing effort in 2010; a split with Gypsum Express team owner John Wight in early 2011; and the financial struggle of maintaining his own racing program in 2011 and the first half of ’12.

But now, after landing a coveted spot on the Kennedy Motorsports operation as a teammate to WoO LMS star Shane Clanton of Fayetteville, Ga., Fuller has renewed hopes for success. While he’s still adjusting to running Capital Races Cars – chassis built by Clanton and former dirt Late Model standout Marshall Green – his confidence and morale rise with every lap he turns.

“It’s gonna take a while for me to get consistent in these Capital Race Cars because, except for about six races, all I’ve ever driven is a black front-end (Rocket) car,” said Fuller. “But these cars are good and I’ll figure them out. I’m getting more and more comfortable in them every time we race.

“I couldn’t be happier about where I’m at right now. Thanks to (team owner) John Kennedy, we have all the resources to get the job done.”

Fuller has made nine WoO LMS starts for Kennedy Motorsports so far, with four top-10 and one top-five finish to his credit. His highest finish was a third on Aug. 7 at Shawano (Wis.) Speedway, but arguably his best all-around run came in his last race, on Sept. 22 at Berlin Raceway in Marne, Mich., the dirt-covered asphalt track where he rocketed from the 12th starting spot to make a mid-race bid for the lead before settling for a sixth-place finish in the Keyser Manufacturing ‘Down & Dirty 100’ presented by NAPA Auto Parts.

Boosting Fuller’s hopes for Thursday night’s 50-lapper is the fact that last year’s NAPA Super DIRT Week event at Rolling Wheels was one of Fuller’s best outings of an otherwise disappointing 2011 Woo LMS season. He started second and led laps 1-33 of the A-Main before being overtaken by eventual winner Rick Eckert of York, Pa., then slipped to fifth in the final rundown only after slowing on the last lap because his car’s left-rear tire was cut by a scrape with Josh Richards of Shinnston, W.Va., as they battled for second place.

“I feel like we should’ve won (the WoO LMS A-Main) last year,” said Fuller. “We were real good, but I just didn’t tighten up the car enough for the feature and I picked the wrong tire. I guess we kind of got ‘hometrack screwed’ – we thought a little bit too much instead of doing what we should’ve done.

“We still led more than half the race and were running second (until the tangle with Richards), so weren’t off much. Hopefully this year we can make the right decisions and get that win we really need.”

Fuller will arrive at Rolling Wheels on Thursday night after spending the afternoon in action at the famed Syracuse Mile, which sits just 20 minutes east of the Wheels. He will be behind the wheel of DIRTcar big-block and 358-Modifieds fielded by the J&S Racing team, running time trials for the VP Small Engine Fuels 200 (scheduled for Sun., Oct. 7) and the Gander Mountain 358-Modified Championship 150 (Sat., Oct. 6). Fuller is a previous winner of both the big-block and 358-Modified events during NAPA Super DIRT Week, capturing the 200 in 2004 and the 150 in ’05.

Fuller is one of three WoO LMS regulars who will pull double-duty during NAPA Super DIRT Week, joining Sweeteners Plus Racing teammates Tim McCreadie of Watertown, N.Y., and Vic Coffey of Caledonia, N.Y. Coffey is a two-time winner of the VP Small Engine Fuels 200 while McCreadie has a career-best finish of second in the event.

Darrell Lanigan of Union, Ky., will lead the WoO LMS contingent to Rolling Wheels, where he was victorious in a circuit event in August 2010. The winner of a record-setting 15 tour A-Mains in 2012 sits on the brink of a second career World of Outlaws title, leading the points standings by a commanding 210 points over Eckert with just four events remaining on the schedule.

Thursday night’s program at Rolling Wheels, which also includes the Mr. DIRTcar 358-Modified Series, is scheduled to begin at 7:30 p.m. Grandstand gates will open at 5 p.m.

Tickets can be purchased in advance by logging on to www.worldofoutlaws.com/tickets or calling the event hot hotline at 877-395-8606.

More information about NAPA Auto Parts Super DIRT Week XLI can be obtained by logging on to www.SuperDirtWeekOnline.com or calling DIRTcar Northeast Headquarters at .315-834-6606.