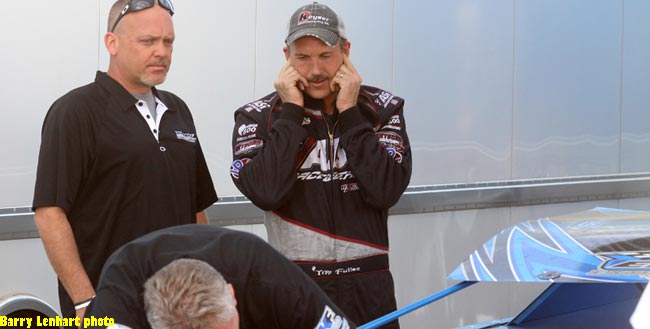 With two-time series champion Josh Richards announcing on Wednesday that he’s decided to end his eight-year run on the national tour and move south to pursue a NASCAR driving career, Watertown, N.Y.’s Fuller has been tapped as Richards’s replacement behind the wheel of the iconic Rocket Chassis house car. Fuller will be in the blue No. 1 machine for this weekend’s WoO LMS events at North Alabama Speedway in Tuscumbia, Ala. (April 27) and Tazewell (Tenn.) Speedway (April 28).

While Richards’s father and career-long dirt Late Model owner, Mark, has not committed to fielding his familiar car beyond this weekend’s doubleheader, Fuller is appreciative of the offer to drive for one of the full-fender division’s most high-profile teams and hopes it will allow him to resuscitate his lagging racing fortunes.

Fuller, 44, had already confirmed after the Illini 100 on March 31 at Farmer City (Ill.) Raceway that he would not enter his own struggling, cash-strapped team in WoO LMS events at North Alabama and Tazewell, so the Rocket house car ride provides him an unexpected chance to continue following the circuit.

“It’s quite an opportunity,” said Fuller, who has been a loyal WoO LMS traveler since winning the Rookie of the Year award in 2007. “Mark could’ve picked a couple hundred drivers (to step in for his son), and I feel real fortunate that he picked me to do it.

“There’s nothing lacking with this team at all. Mark has the best of the best of everything. Basically, to put it into terms, you got the Jimmie Johnson ride and Rick Hendrick called you, so there are no excuses. You gotta produce, and that’s what I’m going to try my hardest to do for him.”

A former champion in the DIRTcar Big-Block Modified division, Fuller has experienced a nightmarish opening to the 2012 season with his self-owned dirt Late Model operation, failing to record a single top-10 finish in seven WoO LMS A-Mains and not even starting the Illini 100 because he had already exhausted his supply of emergency provisional spots for the season. He is currently mired in 15th in the points standings, 288 points behind leader Darrell Lanigan.

But Fuller is just three years removed from a breakout 2009 WoO LMS season that saw him finish a personal-best fourth in the points standings while registering career highs in wins (seven), top fives (17), top 10s (24) and earnings ($172,150). He tied the tour’s consecutive-win record of four and captured all seven of his victories over an 11-race span from July 25-Sept. 6 – a prolific checkered-flag stretch exceeded in WoO LMS history by only one driver, Rick Eckert, who in 2006 won seven times in 10 races.

A variety of obstacles have prevented Fuller from recapturing his ’09 magic, however. In 2010 he won just twice and slipped to eighth in the points standings as he found himself hampered by his Gypsum Express team’s transition to a new engine program and a mid-season bout with appendicitis, and last year he split with car owner John Wight early in the season and struggled to a 10th-place finish in the standings campaigning just a single car from his own stable.

Fuller began the ’12 season with hopes of a rebound thanks to assistance from former WoO LMS team owner Dale Beitler, who provided him a backup car. But with no positive moments through the first seven events, Fuller admitted that the time had come to step off the tour and regroup his effort.

“I’ve been kicked for about a year, and yeah, it hurts my pride and ego – and ego is a lot of this game,” said Fuller, who is tied for 10th on the WoO LMS win list since 2004 but last reached Victory Lane on June 17, 2010, at Merrittville Speedway in Thorold, Ont. “But you still know you can do it. I’ve been through tough times before in the Modified, when things weren’t right, and then you get into a good ride and you go. It comes down to equipment and ability, and I still have the ability to do it. I’m not questioning that.”

Fuller made his debut in the Mark Richards Racing Enterprises mount on April 20 at Roaring Knob Motorsports Complex in Markleysburg, Pa. He used a qualifying provisional to start the 50-lap A-Main and recorded a pedestrian 16th-place finish, but he was encouraged by the outing.

“I felt really good after last week even though we bombed with our finish,” said Fuller, who is looking to end a 65-race winless streak on the WoO LMS. “It’s a big step to jump into somebody else’s car and actually be comfortable, and their cars are actually quite a bit different than mine as far as how they react to everything. But by the end of the night I was actually comfortable in the car, so I think getting one race under our belt to break me in with them was a good thing.

“Now we’re gonna go to North Alabama and Tazewell with me already having some laps in the car.”

Fuller would love to run the remainder of the 2012 WoO LMS for Mark Richards, but he has no illusions about the future.

“We’ve talked about several things for the rest of the year, but I know the situation,” said Fuller. “It all comes down to, You better produce. Mark’s never said that, but I know Mark Richards enough that he wants his driver to produce.

“Hopefully I’m in it for the rest of the year,” he added, “because that means everything’s going good.”

Josh Richards, meanwhile, will this weekend be absent from a WoO LMS event for the first time since Sept. 5, 2004, at Portsmouth (Ohio) Raceway Park – 278 races ago. He departs the tour sitting second in the points standings, 36 points behind Lanigan, and with more wins (38) since ’04 than any other driver. All but one of his triumphs have come driving for his father, who has fielded at least one car in every WoO LMS event since ’04 except June 18, 2012, at Winchester (Va.) Speedway, where his son steered the Ernie Davis-owned No. 25 to victory.

After running a limited schedule of NASCAR Camping World Truck Series events last season for Kyle Busch Motorsports, Richards had hoped to go fulltime on the pavement circuit in 2012. A ride didn’t materialize so he continued on the dirt, but the 24-year-old sensation from Shinnston, W.Va., still felt a longing to chase his NASCAR dreams so he recently decided to move to the Charlotte, N.C., area in order to devote himself to that effort.

“I’ve decided that I’m going to make a full attempt to pursue my career in NASCAR and make a jump fulltime,” Richards told DirtonDirt.com, which broke the news of Richards’s decision. “It’s a lot to give up. To give up not only, you know, the team that we have, I mean, everyone that I have behind me, my whole support group, between all my family, my friends, all my sponsors that have been behind me from the start, and without a doubt all my fans – it’s, really, really, really hard.

“It’s been a real tough decision, and without a doubt the fire inside of me to move on has always been there, and the only way to put it out or keep it going is to try to pursue it. It’s a decision I’ve made the last couple of weeks.”

Richards plans to make occasional dirt Late Model starts for the remainder of the season, but his focus will be on a NASCAR ride that he expects to announce within the next week.

“We’re certainly going to miss Josh, but all of us with the World of Outlaws Late Model Series wish him well with his NASCAR dreams,” said WoO LMS director Tim Christman. “We’ve all watched Josh grow up racing on the series and become a great ambassador for the World of Outlaws, and our hope is that he’ll continue to bring recognition to the series by becoming a star in the NASCAR world.”

Information on this weekend’s WoO LMS events at North Alabama Speedway and Tazewell Speedway is available by logging on to www.northalabamaspeedway.com and www.tazewellspeedway.com.