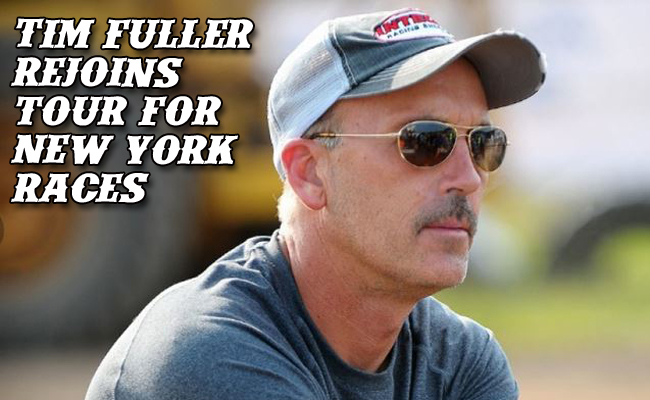 CONCORD, N.C. – June 15, 2015 – Tim Fuller wasn’t able to follow the World of Outlaws Late Model Series full time this season as he had hoped, but now the national tour is coming to him.

Fuller, the Watertown, N.Y., driver who ran full time with the WoO LMS for the better part of eight seasons, will make his first series appearance of the year Thursday evening at Fonda Speedway in Fonda, N.Y., when the national tour returns to the Empire State for the first time since 2013 as part of the four-race Great Northern Tour.

Fuller, who has spent this season driving a DIRTcar Big-Block Modified for Dave and Kelly Rauscher after budget constraints forced him to abandon plans for another full-time WoO LMS campaign, plans to field his own Rocket Chassis with support from the Rauschers and their company D.C. Rauscher Inc. at Fonda as well as the Great Northern Tour finale at Weedsport Speedway in Weedsport, N.Y., on June 23

“I’m beyond excited to finally get back in a Late Model,” said Fuller, who scored the most recent of his 14 career WoO LMS victories last July at River Cities Speedway in Grand Forks, N.D. “I hope we can show up and be competitive right out of the box. You always think you can jump back in it and go. It might take some laps to get acclimated, but I think we’ll do OK.”

Although he may need a few laps to knock the rust off, Fuller will certainly be among the drivers to watch at New York’s two WoO LMS events, which bookend the Great Northern Tour (the trek also includes two events in Ontario, Canada, June 20-21 at Brighton Speedway and Cornwall Motor Speedway).

After more than a decade of modified success that included two Super DIRTcar Series titles, Fuller made the transition to Late Models in 2007, claiming the WoO LMS Rookie of the Year Award while also still competing in modifieds. He spent the next six years following the WoO LMS full time, notching a career-best WoO LMS points finish of fourth in 2009 and establishing himself as a force in the full-fendered division.

But Fuller’s Late Model progression began to slow in 2011, largely due to a split with the Gypsum Express team and owner John Wight, who gave Fuller his start in Late Models in 2005. Fielding his own team, Fuller went winless in WoO LMS action in 2011 and 2012 before a connection with Kennedy Motorsports got him headed in the right direction in 2013 and produced a long-awaited return to WoO LMS victory lane.

After plans for Kennedy Motorsports initially took Fuller away from the WoO LMS in 2014, Fuller rejoined the tour full time midway through the season and was again successful with eight top fives and one win through the tour’s final 20 races, even while essentially funding the team mostly with his own money after Kennedy Motorsports ran into funding issues.

With his promising performance in the second half of last season, Fuller hoped to return to the WoO LMS full time this year, but without sufficient funding, he made the difficult decision to leave his Late Model equipment parked and pursue opportunities to race closer to home in a modified.

“I feel like, in a lot of ways, I didn’t get a fair shake,” Fuller said of his last few seasons in Late Models. “It’s frustrating because when things were clicking, we were pretty good in the Late Models. But you just never know how that stuff’s gonna happen.

“It kills me not racing the Late Model stuff. I still watch DirtonDirt.com and see all those guys and it kills me that I’m not out there doing it. But the money just isn’t there. You just can’t go out there and do it like I did. A lot of that was on my own dime. I just can’t do that anymore when it puts my family in jeopardy.”

With the WoO LMS returning to New York for the first time since 2013, Fuller will at least have the opportunity to race with the series twice without breaking the bank to do it. Plus, he gets the added benefit of taking on the series regulars at two of his favorite tracks in Fonda’s half-mile oval and Weedsport’s 3/8-mile circuit.

“I love Fonda; it’s a great track and I’ve always loved racing there,” Fuller said. “And I love Weedsport. We’ve won a couple championships there and a lot of races in the modified. I look forward to it. Both tracks have great people running the place, so that makes you want to support these races even more.”

While Fuller may have plenty of experience in his modified at both Fonda and Weedsport, he doesn’t expect that to be a major factor in his performance in the upcoming WoO LMS events. He only has a handful of Late Model starts between the two tracks and he’s learned from his experience in both divisions that very little translates between the two cars.

“It’s always different when we go somewhere with our Late Model that you’re used to running your modified,” Fuller said. “The cars just react different and race differently. I don’t think there’s really anything that carries over between the two. You know how to race the track, but that’s it. As far as any similarities in the two different cars, there’s none.”

Fuller knows he’ll have to make a quick adjustment from his modified back to his Late Model if he’s going to compete with the WoO LMS regulars who have had nearly half a season to get their machines dialed in. However, after going back and forth between the two divisions numerous times over the years, he’s confident he can get back up to speed quickly and score a pair of solid finishes.

“We’ve put a lot of time into this Late Model just for two races because we want to make the most of it,” Fuller said. “I want to go out there and be competitive and prove that I can still do it. I know we can, but we’re coming into it after not turning a lap (in a Late Model) since November. These guys have been hard at it almost half a season already and they’re on top of their stuff.

“Would I love to come back for myself and do good in these two races? Absolutely. And I think we can. We’re gonna do our best, but I’m gonna just enjoy being back in my Late Model regardless of how it goes.”

Fonda’s WoO LMS program features a complete slate of action, highlighted by a 40-lap, $8,000-to-win A-Main. Pit gates for the event will open at 4 p.m. with general admission gates opening at 5. On-track action is scheduled to kick off at 7. For more information on Fonda Speedway, visit the track’s website at www.fondaspeedway.com.

The Great Northern Tour moves to Brighton Speedway in Brighton, Ontario, on June 20 for the Vanderlaan Building Supplies and Dibbits Excavating Mud Slingin’ 50. The event features another complete WoO LMS program capped by a 50-lap, $10,000-to-win main event. The program is scheduled to get under way at 7 p.m. Advanced tickets for the Brighton event are available now at www.dirtcar.ticketforce.com. Visit www.brightonspeedway.com for more information on Brighton Speedway.

The Great Northern Tour wraps up on June 23 at Weedsport Speedway with the $8,000-to-win Finger Lakes 40. Pit gates open at 4 p.m. with general admission gates opening at 5 and racing starting at 7. Visit www.weedsportspeedway.com for more information.