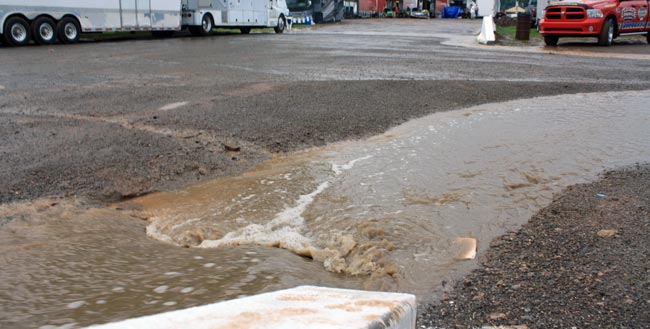 The wet weather sets up a huge World of Outlaws Late Model Series doubleheader on Saturday (June 29) at the four-tenths-mile oval. Friday night’s preliminary card will now be contested on Saturday afternoon prior to the scheduled running of the $30,000-to-win Firecracker 100 by GottaRace.com.

Pit gates will reopen at 10:30 a.m. and the front gates at 11:30 a.m. on Saturday. Hot laps for the preliminary program are scheduled to begin at 12 noon, with Ohlins Shocks Time Trials to immediately follow and racing (heats, B-Mains and 30-lap A-Main paying $6,000 to win) set to get the green flag at 1 p.m.

At the conclusion of Saturday afternoon’s preliminary show, the grandstands will be cleared and prepared for the regularly-scheduled Firecracker 100 finale on Saturday night. The evening program’s time schedule remains the same as previously published, with heat races earmarked to begin at 7:35 p.m.

Lernerville and WoO LMS officials also have a contingency plan in place to deal with further weather-related problems that could arise on Saturday.

If the prevailing conditions do not allow sufficient time for Saturday afternoon’s preliminary program to be run before the Firecracker 100 finale on Saturday night, the event will be pushed to Sunday (June 30) with a 4 p.m. start time for hot laps. The big-money 100-lapper would continue as scheduled on Saturday night, though with time trials added to the itinerary to align drivers in heat races.

Should rain wash out both the afternoon and evening programs on Saturday, then both the preliminary and Firecracker 100 finale shows would be run as a doubleheader on Sunday (June 30) using the time schedule announced for Saturday’s twinbill.

In the event that Saturday afternoon’s preliminary card is completed but the evening Firecracker 100 is rained out, the weekend-topping long-distance spectacular would be postponed to Sunday with hot laps beginning at 4 p.m. Under that scenario the Firecracker 100 heat races would be lined up as planned using each driver’s best finish from the two preliminary programs.

Further details and ticket information on the Firecracker 100 by GottaRace.com can be obtained by logging on to www.lernerville.com.

After Josh Richards won last night’s 30-lap weekend opener, drivers will compete tonight in another full show of Ohlins Shocks Time Trials, heat races, B-Mains and a 30-lap A-Main paying $6,000 to win. Each entrant’s best finish from the two preliminary events will be used to line up the heat races for Saturday night’s big $30,000-to-win Firecracker 100.

6:25 p.m. – There’s no real change in the situation since the last update over one hour ago. There has been a couple breaks in the precipitation, but the rain is coming down with some intensity at the moment, keeping the program under an indefinite delay.

5:50 p.m. – More than two dozen drivers headed over to the football field in Lernerville’s camping area this afternoon to participate in the inaugural Firecracker 100 Kick-It Cup, a kick-ball game that raised awareness and money for programs and research devoted to childhood cancer.

A healthy crowd of fans from the jam-packed campgrounds turned out to watch the game, which included some athletic feats and plenty of fun and hijinx. Smith tumbled to the ground and rolled a couple times while running home from third base. (Cat Daddy brushed himself off and pressed on, albeit with a limp from an aching right knee.) Hubbard was blown backwards when he tried to catch a hot shot and landed on his rump. Fuller was booed by the crowd when he caught a ball kicked by a young boy who got a chance to make a guest kick. Zeigler showed off his hops when he jumped in the air to avoid a thrown ball on his way to first base. Eckert shook out a water bottle on Clanton between innings and replaced WoO LMS announcer Rick Eshelman on the microphone after Clanton donated $10 to make Eshelman come on the field to attempt one kick.

Clanton was a clown prince of the day’s action – not to mention the guy with arguably the strongest right foot. He was cutting up throughout the game; for instance, he twice grabbed McCreadie as his fellow Outlaw ran the bases – one time taking McCreadie to the ground at third, and later wrapping him up near second. And when it was Clanton’s turn to kick, he boomed a couple balls deep in the outfield. (It should be pointed out, of course, that Clanton plays plenty of kick-ball; the game is a staple of his family’s holiday gatherings. His wife, Michelle, shakes her head when describing how Clanton, his brothers and other relatives get into down-and-dirty kick-ball battles.)

The first-ever Firecracker Kick-It Cup was undoubtedly a success. Including donations made in drivers’ names, a raffle that included driver apparel and other items and money pledged during the game by fans and participants (McCool gave $200 in cash to the cause), over $2,000 was raised for kids with cancer.

5:05 p.m. – A severe thunderstorm warning for the Lernerville Speedway area expired at 4:15 p.m. with only a few drops of rain falling at the track — dark, menacing clouds just brushed past the facility (photo below) — but at about 4:35 p.m. rain did start falling. About 10 minutes later the precipitation intensified and as of 5:05 p.m. there’s still rain coming down.

Officials are in a holding pattern with tonight’s program, waiting to let the weather play out before determining a plan of attack.

4:05 p.m. – A similar scenario to last night is setting up today as a threat of showers and thunderstorms remains across western Pennsylvania. There was no overnight and morning rain for track crews to deal with today, however; only a few light, short sprinkles have fallen this afternoon, so the racing surface is set to be ready for hot laps at 6:50 p.m. and the pit area has dried out nicely.

With precipitation still possible, track and series officials have said they will push the show along in rapid-fire fashion as they did last night, when the final checkered flag flew at 9:59 p.m.