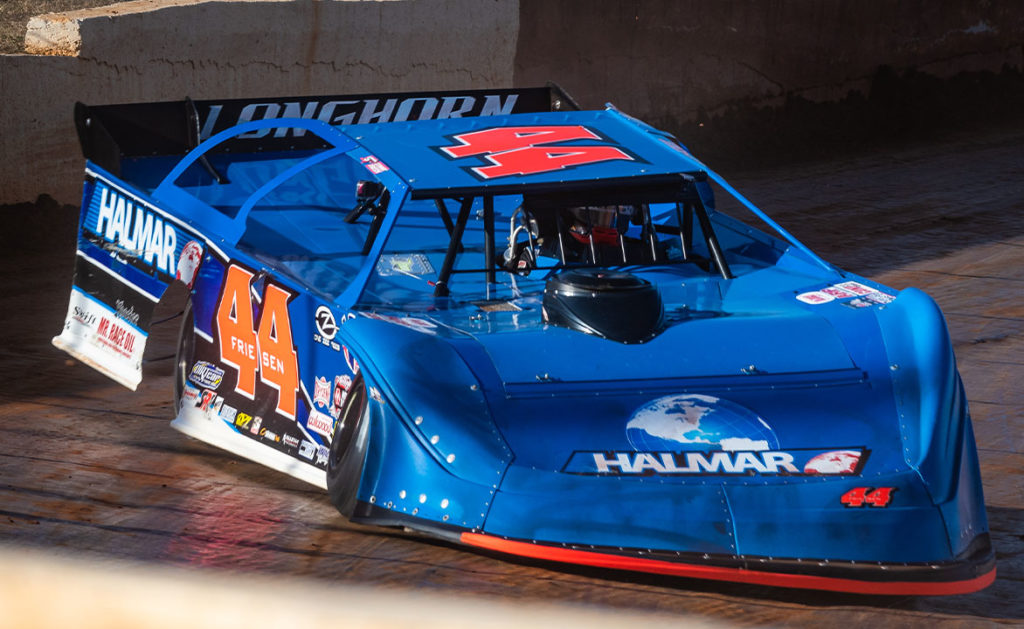 But a win won’t come easy. Thursday’s race at the “House of Power” is the first time he’s raced a Late Model since the Tennessee Tip-off at Smoky Mountain Speedway in March. Friesen stated he’s still trying to gain knowledge about the car.

“We tested at [Utica-Rome Speedway], and I’m just trying to wrap my head back around it,” Friesen said. “It’s been a couple of months since we did it in the wintertime and didn’t even have it close to figured out then.

“I think I have a little bit more of an idea of where to go and stuff, and I’ve been getting a lot of help from the guys at [Longhorn Chassis].”

Friesen’s chance at history comes at a place familiar to him. He won the Super DIRTcar Series event at Orange County earlier this month and has more laps at the track than any other Late Model driver in the field.

Despite the experience around the .625-mile oval, he’s not sure how his Late Model will adapt to the track.

“Racing the modified will help; being able to judge tires a little bit off that,” Friesen said. “This place has been different; we’ve been here a handful of times this year, and it’s been different every time. We’ll see how it goes, and we’ll hopefully use some of our experience to an advantage.”

Friesen’s found a ton of success in 2021, making the playoffs in the NASCAR Truck Series and winning six times on the Super DIRTcar Series tour. He knows success with the World of Outlaws won’t come easy, though.

“There’s 50 good teams out there that lineup and go balls out with the best of the best stuff, and it’s very competitive,” Friesen said. “That’s what makes it awesome learning this car and getting to know guys like [Jonathan Davenport].”

If Friesen can defeat the World of Outlaws, it’ll be a defining moment in his career. A moment born from a great opportunity.

“It’d be pretty cool, I guess, to have three World Racing Group [Series] wins,” Friesen said. “We got to qualify for the show first, and then we’ll go from there.”

Thursday’s trip to Orange County Fair Speedway will be the first time since 2004 that The Most Powerful Late Models on the Planet battled at the New York track.