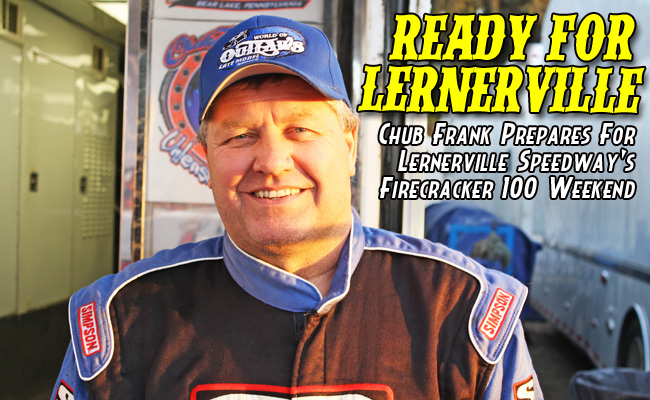 SARVER, Pa. – June 24, 2015 – Chub Frank always looks forward to Lernerville Speedway’s Firecracker 100, but the World of Outlaws Late Model Series veteran may be looking forward to it more this year than ever.

Frank, 53, of Bear Lake, Pa., heads into Lernerville’s ninth annual Firecracker 100 presented by GottaRace.com this weekend with plenty of confidence in his new Longhorn Chassis after a much-improved first half of the 2015 season. He hopes to be among the contenders during Lernerville’s blockbuster weekend, which features three nights of WoO LMS action that include preliminary race programs on Thursday and Friday ahead of Saturday’s $30,000-to-win Firecracker 100 finale.

“We’ve had some good cars at the Firecracker before, but I think we might be better going into this one than we’ve been in a long, long time,” said Frank, who enters the Firecracker 100 fourth in the WoO LMS points standings. “I always love going to Lernerville, but I’m definitely looking forward to going there this time with this car and seeing how we do.”

Indeed, Frank’s performance has improved noticeably since debuting his new Longhorn machines at the beginning of the season. After 18 WoO LMS A-Mains this year, Frank is already two top-fives and two top-10s away from matching his 2014 tally in both statistical categories. His six top-fives and 13 top-10s have Frank on track to have his best season statistically since 2009, which coincidentally, was the last season in which Frank won a WoO LMS event.

Frank has been close to ending his lengthy WoO LMS dry spell, especially recently with two runner-up finishes in the past four WoO LMS events. While those near-misses have been frustrating for a driver longing to make his return to victory lane, they also tell Frank he’s close to finally breaking through.

“We’re learning stuff all the time about these Longhorns,” said Frank, whose 16-career WoO LMS wins ranks ninth on the tour’s all-time wins list. “We just haven’t got it quite perfect, but it’s a lot better than we were. We’re finishing in the top five and got a couple seconds and that’s promising.

“We’re still off a little bit, but we’re a lot closer than we’ve been in a long time. I know we can get it there, we just have to keep working on it and fine-tuning it here and there.”

With that in mind, Frank knows it’s important to run as well as possible in both preliminary features while also preparing his car for the conditions he’ll likely face in Saturday’s finale.

“You race those preliminary races just like any other race, but you also keep in mind what you’re looking at as far as the track on Saturday,” said Frank, whose best Firecracker 100 finish of fifth came in the inaugural running of the event in 2007.

“You’re adjusting to what you think the car needs the whole time you’re there. You’re just trying to get it right, while keeping in mind that the track’s probably going to be really slick for the feature on Saturday and you want to work your way toward that at the same time.”

With his confidence boosted by his improved performance this season, Frank is nearly certain that a return to victory lane is coming soon, perhaps even this weekend at Lernerville.

“We’ve got the cars to do it now, and I think we’re probably going to do it at some point,” Frank said of his chances of scoring his first WoO LMS victory since Aug. 22, 2009. “The problem is there’s always someone that’s just a little bit better than us. That’s why we’ve gotta keep working to find that last little bit to get where we’re the one that’s better than everyone else.

The Firecracker 100 weekend also includes plenty of activities off the track to keep fans entertained. The third annual Firecracker 100 Kick-It Cup Kickball Game and Silent Auction will be held at 1 p.m. on Friday afternoon. The kickball game features drivers competing in a friendly match to raise awareness and money for programs and research devoted to childhood cancer.

Kick-It Cup Participants will include Gregg Satterlee, Shane Clanton, Rick Eckert, Tim McCreadie, Morgan Bagley, Boom Briggs, Eric Wells and several others. To raise money for the fight against childhood cancer, fans can donate money on behalf of their favorite participating driver by logging on to http://www.kick-it.org/games/2015/06/3rd-annual-firecracker-100-kick-it-cup where each driver’s name can be found in the pulldowns under ‘Team 1’ and ‘Team 2.’

Saturday afternoon features the traditional slate of Fan/Driver Horseshoe and Cornhole tournaments, followed by the driver autograph session later in the afternoon.