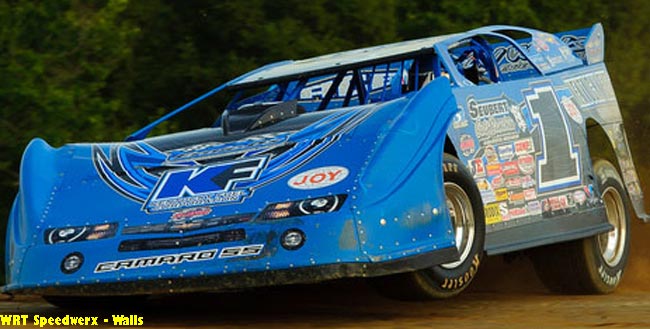 Richards Ready For Another Championship Battle With A Mentor At Lowes Foods World of Outlaws World Finals Nov. 3-5

CONCORD, NC – Oct. 21, 2011 – Josh Richards has already outdueled two of his racing mentors for World of Outlaws Late Model Series championships. Can he down another to grab an unprecedented third title in a row?

The 23-year-old sensation from Shinnston, W.Va., will get his chance Nov. 3-5 during the fifth annual Lowes Foods World of Outlaws World Finals presented by Tom’s Snacks, Coca-Cola and Nature’s Own, which closes the national full-fender tour’s 2011 campaign with a pair of 50-lap, $10,000-to-win A-Mains at The Dirt Track at Charlotte.

This year’s spectacular season-ender – a unique extravaganza of speed that also includes the World of Outlaws Sprint Car Series and the Super DIRTcar Series for Big-Block Modifieds – features Richards’s third straight championship face-off with a veteran driver who provided him valuable advice early in his career. After defeating Steve Francis in 2009 and Darrell Lanigan in 2010, Richards has Rick Eckert standing between him and crown No. 3.

“It’s kind of crazy to race for a championship three years in a row with guys who have all helped me in their own way,” said Richards, who ran a limited WoO LMS schedule in 2004 as a 16-year-old before going fulltime the following season and winning Rookie of the Year honors. “It doesn’t change our approach though. Our goal is always to try to beat everybody, no matter how close we are to them.”

Eckert is certainly close to Richards. While Eckert now runs a self-owned Team Zero by Bloomquist chassis, through the end of the 2006 season he was a loyalist of Rocket Chassis, the Shinnston, W.Va.-based business co-owned by Richards’s father and team owner, Mark. During his long stint campaigning Rocket cars fielded by the late Raye Vest, Eckert worked closely with Mark Richards and literally watched Josh Richards grow up.

“Before I even raced anything Rick let me practice his car once at Interstate (79 Speedway),” said Richards, recalling laps he took around the quarter-mile oval across the street from the Rocket Chassis headquarters. “I remember a whole bunch of guys were there testing one day – Eckert, Francis, Chub (Frank) and some other guys – and Rick asked me if I wanted to take his car out.”

When the teenage Richards began climbing behind the wheel of one of his father’s Rocket Chassis house cars to go racing for real, Eckert was one of the voices offering him driving and technical pointers. To this day Richards credits Eckert for playing a key role in his first-ever WoO LMS A-Main win, on Aug. 15, 2005, at Lebanon Valley Speedway in West Lebanon, N.Y.

“He helped me hold on to win that race,” said Richards, who with that victory became the first driver to win an A-Main and the Rookie of the Year award in the same season. “Rick was giving me hand signals from the inside of the track because he had blown up when he was up front. He was signaling me to use four-wheel brake, to straighten up my corner entry. I’ll always remember that.”

Six years later, Richards rolls into the final three events of 2011 with 37 career WoO LMS wins – more than any other driver since the tour’s reincarnation under the World Racing Group banner in 2004 – and seeking not only his third consecutive title but also a single-season victory record. His triumph in the World of Outlaws Late Model Showdown on Oct. 12 at The Dirt Track was his ninth of 2011, tying him with Scott Bloomquist (’04) for the single-season standard.

Of course, if Richards pulls off a championship hat trick during the World Finals, that would also mean he prevented Eckert from capturing his coveted first WoO LMS title. But as much as he’d like to see Eckert join him as a World of Outlaws champion, his focus is on his own championship aspirations.

“It’s cool and a lot of fun to race for a championship against him,” Richards said of Eckert. “He’s had a phenomenal year and if he comes out on top he definitely deserves the championship, but we’re gonna race as hard as we can to win it. I feel like is our last shot to get us another one – at least for a while – because of our plans to do the NASCAR stuff next year (he’s hoping his limited schedule driving for Kyle Busch this season on the NASCAR Camping World Truck Series will turn into a fulltime deal in ’12), so we don’t want to leave anything on the track.”

Unless Richards overtakes Eckert for the points lead in the pre-World Finals program at Screven, the two-time defending tour champ will hit The Dirt Track’s surface just like he has in every race since early May: sitting second behind Eckert in the points standings. Eckert grabbed the top spot in the standings from Richards with a victory on May 7 at Swainsboro (Ga.) Raceway and has refused to relinquish it.

But Richards has chipped away at Eckert’s edge over the past six races, turning a 60-point deficit into his current 14-point shortfall entering the mid-week program at Screven. He’s put the pressure on Eckert by going on a hot streak, posting six consecutive top-five finishes (including four wins) in full-points shows.

The difference in the points race has been Eckert’s superior consistency. While Richards leads the tour in wins, top-five finishes (22) and earnings ($201,660), Eckert, who has three wins (including a crucial Oct. 6 score at New York’s Rolling Wheels Racing Park), matches Richards in the top-10s category (25) and has only one finish worse than 13th (a 16th-place run on Aug. 20 at Michigan’s Merritt Raceway) compared to four for Richards (finishes of 14th, 16th, 19th and 21st).

Richards’s uncharacteristic stumbles have forced him into the role of chaser in the points standings this season. During his two previous championship seasons he was atop the points after more than half the events and never was more than 44 points out of first place.

“I feel like this whole year we’ve had a phenomenal car but we hit a lot of speed bumps, especially the first part of the year,” analyzed Richards, who entered the ’09 World Finals trailing Francis by four points (he won by 14) and began the ’10 doubleheader leading Lanigan by 22 points (he won by a scant four-point margin). “It wasn’t looking that promising for us for awhile, but now we’re definitely in the hunt.

“The biggest thing with these last races is to just keep on racing like we have all year – just like it’s another race, and with the goal of winning the race. I’m sure Rick’s gonna be contention for a win every night too, so we just have to try to finish ahead of him. That’s our gameplan.”

Richards will take to the four-tenths-mile Charlotte oval with a sense of quiet confidence. He has, after all, been through two dramatic, tense points battles during the World Finals – last year’s with Lanigan wasn’t determined until the final lap – and he also happens to love racing at The Dirt Track. His successful performance record at Charlotte includes one win in each of the last four seasons; Eckert, meanwhile, has never won at Charlotte but has authored several very strong runs, including a third-place finish (from the 18th starting spot) in the opener of the 2009 World Finals, a runner-up finish in last year’s first World Finals A-Main and a fourth-place outing in the Oct. 12 WoO LMS Showdown.

Celebrating a WoO LMS championship in front of a sell-out crowd of over 14,000 fans and a live television audience on the SPEED cable network is a thrill Richards is ready to experience again.

“There’s no other place I’d rather end the season,” Richards said of the state-of-the-art speedway. “There are a lot of great racetracks out there, but being at the Dirt Track at Charlotte – man, it’s an awesome track and a great facility, and it’s in the heart of stock car racing. It’s also one of the few tracks capable of holding an event so big and doing it justice.

“The World Finals is my favorite weekend of the year,” he continued. “In my opinion, it’s become the biggest show of the year in terms of a whole short-track event. It’s really fun for a driver and especially a fan – there’s just so much going on in every class. I love just being a part of it.”

Win or lose, Richards will enjoy every minute of his latest bid for the $100,000 WoO LMS title.

“I felt like ’09 was a stellar year for us, last year was a little bit better and this year has been awesome except for a few problems that put us behind in the points,” said Richards. “I feel like we’ve come a long way even from our first championship year to now. We’re that much more mature of a team. Everybody gets along so well. We all know each other, and I’ve learned a lot myself the last few years. I feel like we’re competitive at more tracks than we’ve been, and that definitely helps a championship run.

“A championship would certainly top this year off. If we can win three in a row, it’ll be awesome, but whatever happens, it’s been a great year.”

The Lowes Food World of Outlaws World Finals presented by Tom’s Snacks, Coca-Cola and Nature’s Own, begin on Thurs., Nov. 3, with the big Kellogg’s Qualifying Night featuring two rounds of Late Model and Sprint Car time trials and two sets of Big-Block Modified heats. Each division’s first round of qualifying will apply to Friday’s program and the second round to Saturday’s racing card.

The Late Models and Sprint Cars will compete in full programs (heats, Last Chance Races, A-Mains) on both Fri., Nov. 4, and Sat., Nov. 5, while the Big-Block Modifieds will contest Last Chance Races and 40-lap features each evening.

Tickets for the Lowes Foods World of Outlaws World Finals can be obtained by logging on to www.charlottemotorspeedway.com or calling 1-800-455-FANS. Three-day packages are available for the bargain price of $69 and $24 for children 12-and-under.