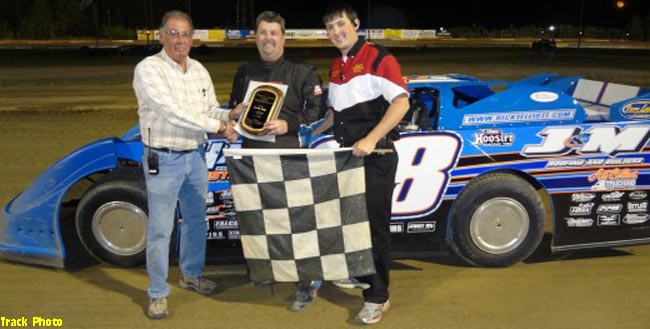 DELMAR, DE – May 29, 2013 – Ricky Elliott already knows what it feels like to win a World of Outlaws Late Model Series A-Main, but he doesn’t know the joy of downing the national tour’s stars on his home turf.

That would explain why the veteran driver from Seaford, Del., is so focused on reaching the checkered flag first on Thursday night (May 30) when the renowned World of Outlaws circuit contests the Fulton Bank 50 at Delaware International Speedway, a half-mile oval that sits virtually in his backyard.

“This is the one I’d really like to have out of all of ’em,” Elliott said of Thursday’s $10,000-to-win event, which marks the ninth time in the last 10 years that the WoO LMS will visit to DIS. “I mean, it’s 15 miles from my race shop. And even though I haven’t been a regular there since ’92, I still race there on occasion. Whenever we’re home and local, we’ll be there (on a Saturday night).”

So far this year, Elliott, 47, has been racing near his house quite a bit. He enters the Fulton Bank 50 having not missed a single show at Delaware International in 2013 – and not lost a feature either. He’s won all five of his dirt Late Model starts this season, including last Saturday night’s 20-lapper.

Elliott’s sizzling results to date would appear to give him plenty of momentum for the track’s richest event of the ’13 campaign, but he understands he’ll have to raise his performance level even higher if he expects to defeat such WoO LMS standouts as defending champion (and three-time WoO winner at DIS) Darrell Lanigan of Union, Ky., points leader Josh Richards of Shinnston, W.Va., Rick Eckert of York, Pa., Shane Clanton of Zebulon, Ga., and Tim McCreadie of Watertown, N.Y. What’s more, with only eight total starts under his belt this season – away from DIS, he has finishes of fourth and fifth at Georgetown (Del.) Speedway and scored a runner-up finish on Sunday night at Potomac Speedway in Budds Creek, Md. – he hasn’t been as active as usual leading into the World of Outlaws invasion of his home track.

In fact, ask Elliott if this is the strongest he’s ever felt on the eve of DIS’s WoO LMS spectacular, and he’s quick to respond.

“No, not really, because when I was out on the road running more often I really think I was a lot sharper than what I probably am now,” said Elliott, who has entered more than 60 WoO LMS events since 2004 (15 appearances in ’08 is his single-season high) and scored his lone A-Main victory on Aug. 24, 2010, at Brewerton (N.Y.) Speedway. “I used to run a lot of the Outlaw races, but my business right now has got me so busy that I just can’t travel like that anymore.”

Indeed, Elliott’s time is increasingly taken up by his business interests. A year-and-a-half ago he opened up a subsidiary to his Advanced Motorsports Speed & Custom, becoming Delaware’s lone Master Distributor for equipment fluids made by the American Refining Group in Bradford, Pa.

“I still love racing,” said Elliott. “I’m still as dedicated as I ever was when I’m at the track and in the car, but it’s just that the work it takes to maintain a car like this to travel to big races and compete at that level – it’s tough, man. I’ve got kids ready to go to college, playing sports, racing, and I’ve got the businesses to take care of. There’s not as much time for racing as I’d like.”

Nevertheless, Elliott isn’t discounting his chances of finally breaking through in DIS’s WoO LMS affair. He’s confident he has the artillery to beat the Outlaws.

“My car is really good this year,” Elliott said of his self-owned Rocket Chassis machine that carries a ProPower engine. “A lot of credit for that has to go to Tom Buckingham (father of Tennessee driver Shannon Buckingham). He’s a good friend of mine, and we trade information back and forth. He’s been very key on keeping me up on what’s really hot in the industry.”

Elliott has qualified for all previous WoO LMS A-Mains at DIS, finishing as high as fourth twice. In 2008 he started from the pole position but was outgunned by eventual winner Lanigan at the initial green and then ran in second until losing two spots late in the distance, and last year he charged forward from the 17th starting spot to score another fourth. He also authored contending runs in ’05 (led until being overtaken by Lanigan on lap 25 and held second until losing a cylinder and retiring on lap 46) and ’07 (climbed as high as second until front-end damage from clipping an infield tire caused him to settle for an eighth-place finish).

“I’m hoping we have some luck,” said Elliott, who has won dozens of races at DIS in both dirt Late Models and Big-Block Modifieds. “You gotta be fast and you gotta make the right decisions, but so much boils down to luck. Like last year – they (WoO LMS officials) put me back for jumping the start of the heat, so we ended up having to run a B-Main and starting 17th. I got up to fourth and had a car good enough to win – I truly believe that. If I’d have started in the top five or six, I think we would’ve had a shot to win it. But that’s part of it.”

One thing Elliott won’t do is allow his mind to dream about winning the Fulton Bank 50.

“It would be nice to have all the stars and the moon line up for us,” said Elliott. “I’m sure we’d have a lot of people with us in the Victory Lane photo if we won it, but I’m not sitting here thinking about what kind of party we’ll have if we could pull it off. You gotta win ’em first before you can think about what you’ll do afterward.”

Delaware International Speedway’s gates are scheduled to open at 5 p.m. on Thurs., May 30, with hot laps set to begin at 7 p.m. Time trials and heat-racing will follow. The track’s Little Lincoln division will also be on the card.