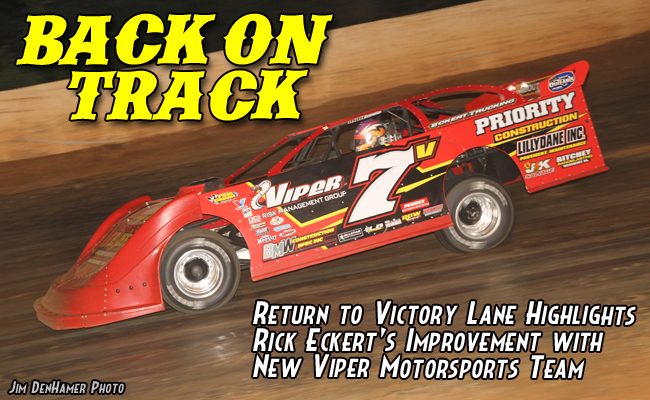 Instead of constantly hearing about his prolonged absence from victory lane on the World of Outlaws Late Model Series as had become all too normal for the 2011 WoO LMS champion, Eckert was enjoying words of congratulations and support from passersby who stopped by his pit area as he and his team prepared for the night’s WoO LMS event.

“It’s hard on you when you go as long as I did and you go a whole season without winning one,” Eckert, 49, of York, Pa., said on Saturday, less than 24 hours after ending a 67-race WoO LMS winless streak with a victory in the tour’s first-ever visit to Ponderosa Speedway in Junction City, Ky., on Friday. “You get tired of hearing about that stuff. Fans mention it and the reporter guys keep asking you about it every time they see you. It’s nice to have people coming by and telling you good job instead of asking if tonight is the night or whatever.”

Indeed, Friday night’s victory – the 31st of Eckert’s WoO LMS career – was a long time coming for the veteran Eckert, who without a WoO LMS win since July 9, 2013, was four races from matching his longest stretch without a series triumph. He went 71 races without a victory between July 8, 2006 and June 21, 2008.

But for as rewarding as the win was for Eckert personally, it was also an accomplishment shared with his supporters, particularly his major financial backers Paul Crowl and Shawn and Lisa Martin of Viper Motorsports. The group stepped in to keep Eckert on the WoO LMS tour and in quality equipment when it appeared the longtime series veteran might not have a WoO LMS ride after his time filling in for Josh Richards in the Rocket Chassis house car came to a close.

“It was pretty cool to be able to call them and tell them we won,” said Eckert, who was one of the original 12 drivers that joined the WoO LMS when the tour was restarted under the World Racing Group banner in 2004. “Shawn and Paul neither one have ever had a car win a race on a (national) series, I don’t think, so that’s pretty cool to be able to put it in victory lane for them and have it pay off for them.”

The Ponderosa victory may only be the beginning for the new team, which came together in rush just before the season started in February. After a slow start to the WoO LMS campaign, Eckert and the team have improved drastically of late, with the Ponderosa victory following finishes of eighth at Friendship Motor Speedway in Elkin, N.C., and fifth at Fayetteville (N.C.) Motor Speedway.

Eckert’s streak of strong performances ended at Smoky Mountain when an early tangle dropped him to an 18th-place finish in Saturday’s A-Main. But Eckert remains positive about his team’s improved performance as he continues to adapt to his new MasterSbilt by Huey machine.

“It’s no secret we were struggling,” said Eckert, who before the Carolina doubleheader and the Ponderosa victory recorded just three top-10 finishes in 10 WoO LMS events on the year with no top-five results. “We made some big steps last weekend in Carolina. I think we finally got a direction to go that works for me and it showed (at Ponderosa). We’ll keep going that direction and hopefully it keeps working for us and we keep getting better.

With his confidence up following his return to victory lane, Eckert has a positive outlook going forward. While he knows he and his team still have room to improve, he doesn’t intend on going nearly two years before winning again.

“Right now, I feel like we’re getting to a point that we’re back competitive night in and night out,” said Eckert, who broke into the top five of the WoO LMS points standings following his Ponderosa victory before Saturday’s setback at Smoky Mountain dropped him to seventh. “There’s really no one out there just dominating the tour right now. There’s some fast guys, but we’re all pretty even. I guess you could say we’re sharing the wins a little bit, so we’re gonna do all we can to get our share.”

Eckert will chase his next WoO LMS victory when the tour returns to action May 23-24 with a trip to Tyler County Speedway in Middlebourne, W.Va., for a pair of events during the Jackpot 100 weekend.

The Memorial Day weekend event kicks off with an open practice on Fri., May 22 followed by a concert by Craig Wayne Boyd. Sat., May 23 features an $8,000-to-win WoO LMS program, while Sun., May 24 will see another complete WoO LMS program with $10,000 going to the winner. For more information on Tyler County Speedway’s Jackpot 100 weekend, visit www.tylercountyspeedwayonline.com.