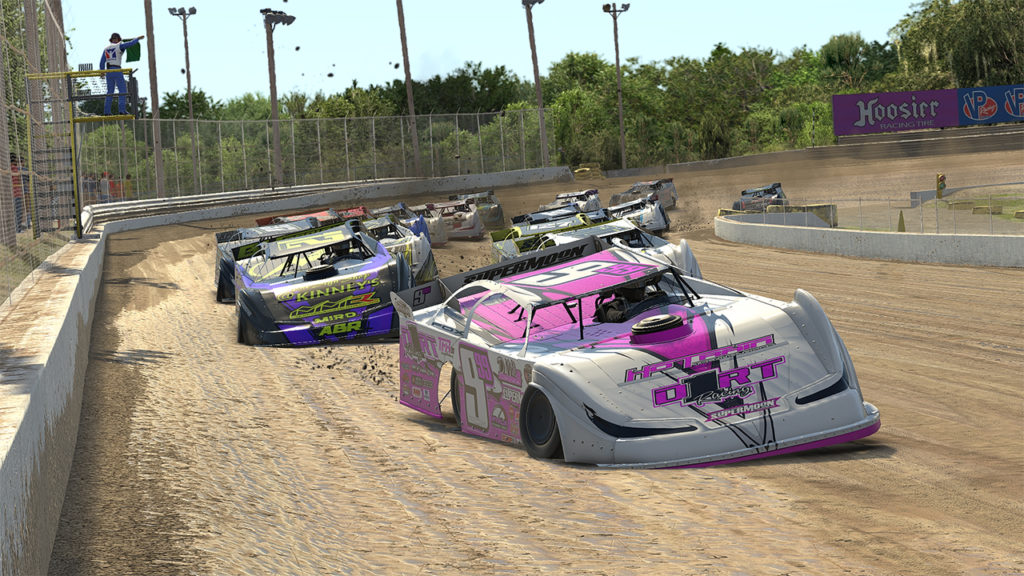 D1RT Racing’s Dylonn Fox held off a hard-charging Alex Bergeron, then weathered multiple late-race cautions to take the victory in Monday night’s iRacing World of Outlaws Morton Buildings Late Model World Championship race from Volusia Speedway Park. Fox became the fifth different winner in the first five races of the season, as the series reached the halfway point of its 10-event calendar with its first repeat course of the season.

“We tried something different (in qualifying),” Fox explained of the key factor in his breakout performance. “We set up the car for the bottom middle to hopefully avoid some of the wrecks, and it worked out in our favor tonight. I think you have to take some risks—everybody’s so close in speed, you have to try and do something different than the rest of these guys.”

While Volusia wasn’t the first time that Fox scored a heat victory this season, as he started on the pole for the 50-lap feature event after winning the first heat, it did mark his first time on the podium this year. After back-to-back cautions to start the race, Fox went toe-to-toe with Bergeron in the middle laps of the final, countering Bergeron’s strong high line in Turns 1 and 2 with a faster line on the low side of the track in Turns 3 and 4.

A late caution involving Casey Kirwan and Evan Seay set up a five-lap shootout, but Fox got a much better start than Bergeron that made second place the key battleground position. As Kendal Tucker and Kevin Dedmon looked to challenge Bergeron for the runner-up spot, Austin Carr swooped in and split the duo, and climbed to third when a caution for Shad Prescott ended the race under yellow.

Bergeron returned to the box after finishing last in last week’s final from Eldora Speedway after a major crash ended his race early. Like Kirwan last week, Carr came through the field from a less-than-ideal starting spot to earn the final podium spot, putting Elite7 Racing on the podium for the first time in 2019. Dedmon and Tucker completed the top five.

“We had a good run, and it’s a good night for points,” said Bergeron. “The car went away there at the end, and I just hoped that Kendal wouldn’t go by us, but we stayed in second. Congrats to Dylonn Fox for the win tonight—we were fast, and the car was real good, but there were only two lines, so it was really tough for sure.”

“It’s tough running through there, especially when you’re in the middle like that,” added Carr. “You have to pick and choose basically where you want to go, and I was just trying not to be too aggressive, keep my head right, and make moves. But when the track gets slick like that, man, I just love it and I come to life. Hopefully all the tracks are like this for the rest of the season!”

Incoming points leader Blake Cannon missed the feature and lost the points lead, but the top spot remains within the Swindell SpeedLab Esports family as Tucker inherited the top spot. Current standings through five races are as follows:

The iRacing World of Outlaws Morton Buildings Late Model World Championship will resume next Monday at Kokomo Speedway, which will host its first race in series history. As always, the race will stream live on the iRacing eSports Network on Facebook, Twitch, and YouTube starting at 9PM ET.