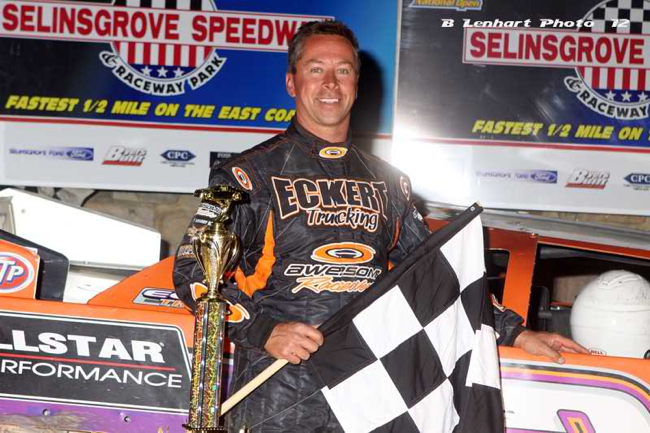 In following the WoO LMS tour for the 12th consecutive season, Eckert will have at his disposal three new MasterSbilt by Huey race cars owned by Shawn and Lisa Martin of Viper Motorsports, while Crowl will provide the team with Cornett Race Engines. The team will race out of Eckert’s York, Pa., shop using Eckert’s familiar orange transporter.

The new team expands on Eckert’s recent part-time ride with Crowl. Eckert, who claimed his only WoO LMS title in 2011, fielded Crowl’s No. 7 Rocket Chassis in regional specials on WoO LMS off weekends over the past two seasons, picking up a number of special event victories.

Eckert is coming off a runner-up finish in the 2014 WoO LMS championship chase in a season in which he shuttered his self-owned team to fill in for the sidelined Josh Richards in the Rocket Chassis house car. Eckert, who has finished among the top five of the final WoO LMS standings in all but two seasons since the tour was restarted in 2004, ranks fourth on the tour’s all-time wins list with 30 series victories.

Eckert will join the rest of the WoO LMS regulars in launching the 2015 campaign Feb. 6-7 at Screven Motorsports Complex in Sylvania, Ga. The tour continues south from Screven for two more events Feb. 14-15 at Bubba Raceway Park in Ocala, Fla., followed by the DIRTcar Nationals at Volusia Speedway Park in Barberville, Fla., which features three WoO LMS events Feb. 19-21 as part of a week’s worth of racing action.