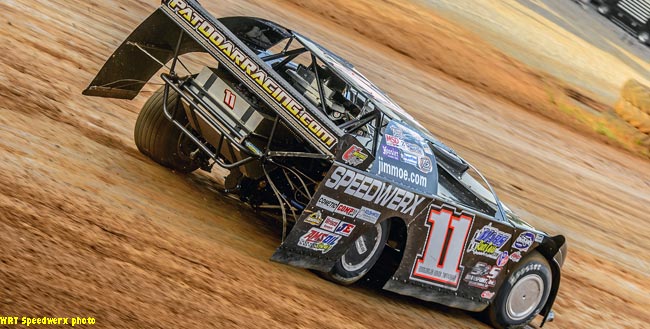 SUPERIOR, WI – July 4, 2012 – If Pat Doar is ever going to snap out of his season-long sophomore slump on the World of Outlaws Late Model Series, the time is now.

With the nationally renowned circuit kicking off its six-race ‘Wild West Tour’ through Doar’s home region this Friday night (July 6) at Amsoil Speedway – a track the resident of New Richmond, Wis., knows especially well – he realizes the schedule has set him up for success. He better start producing – or else.

“If we can’t even get the job done at tracks we’re familiar with,” Doar said in bottom-line fashion, “then we have no business traveling all over the country (with the WoO LMS).”

It’s been a frustrating campaign for the veteran 48-year-old driver, who entered the 2012 WoO LMS with high hopes after winning the tour’s Rookie of the Year honor last year. A longtime specialist of WISSOTA spec-motor Late Model racing, Doar stepped up his program in ’11 to run a national open-competition Late Model schedule with the Outlaws and showed plenty of promise, recording seven top-10 finishes, one fast-time honor, five heat wins and a $10,000 victory in a 40-lap Preliminary Feature at Tyler County Speedway in Middlebourne, W.Va.

But through 22 events this season, Doar has just four top-10 finishes on the WoO LMS (his best: fifth on Feb. 18 at Bubba Raceway Park in Ocala, Fla.) and hasn’t won a single heat race. The savvy racer who seemed to get stronger with each lap he ran on unfamiliar tracks in 2011 has been searching unsuccessfully for his rhythm this year.

“We’re missing something somewhere,” said Doar, who ranks ninth in the current WoO LMS points standings. “We’re working hard to figure things out – even though it might not look that way – but this racing deal isn’t easy, especially when you’re running against the competition we are.

“We thought we were on the right track after last year, but our struggles just show how racing keeps you on your toes. Everything is constantly changing – shock technology, tire technology. Somebody can get on a roll, but then something will change in the racing environment and what they’re doing won’t work anymore.

“I’m hoping my environment changes soon,” he quipped. “The way we’re running is no fun.”

Doar, who fields his own racing equipment, has been switching between his Mars and Rocket chassis cars in recent WoO LMS events in an effort to spark his season. He plans to use his Mars mount in this Friday night’s 50-lap, $10,000-to-win spectacular at Amsoil Speedway, which was known as Superior Speedway when it hosted its only previous modern-era WoO LMS show in 2010.

“Superior was my Friday-night home for probably 15 years so I’m looking forward to going back there,” said Doar, who lives about two hours and 20 minutes from the three-eighths-mile Amsoil oval. “It’s one of my favorite tracks.”

Doar is a three-time track champion at Amsoil Speedway, winning spec-engine Late Model titles in 2005, ’06 and ’10. He finished ninth in the track’s 2010 WoO LMS A-Main, rallying after beginning his night with a poor time-trial effort because he used the incorrect tire combination on his car.

“It’s a tricky place,” Doar said of the speedway located near Lake Superior. “It has three of four grooves – you can run the bottom, the middle, the top and spots in between – but it has a paper-clip shape so you gotta handle. You can’t push on corner entry like you can get away with at other tracks because there’s no time for that – the straightaways are pretty good size, but the turns are sharper than at larger tracks.”

Doar raves about the Amsoil track surface, which he proclaims to have some of “the best clay for a racetrack” that he’s seen in his travels.

“The clay at Superior is like the stuff you make pottery with in class,” said Doar, whose last starts at Amsoil Speedway came in the spring of 2011 (a win and a third-place finish). “If it’s tacky, there’s so much traction, but it usually gets polished off and slippery. And when it’s slippery, if your car is right, you can maneuver around and drive away.

“When you hit the setup there, you can take off and not get held up. There’s a lot of room to pass.”

Doar is confident that Friday’s action at Amsoil Speedway will serve as a much-needed reset for his season. Starting at Amsoil, he’ll run nine consecutive WoO LMS events relatively close to his house, including the Aug. 3-4 USA Nationals at Cedar Lake Speedway in his hometown of New Richmond.

Doar certainly would like to forget the majority of his 2012 campaign, which includes three hard, frame-bending accidents and a just-completed trip to the Northeast that was especially problematic. His two-week-long excursion to Maryland, Pennsylvania, Canada and New York not only failed to produce a finish better than 10th in seven races, it also nearly came to an early end when his hauler’s generator suffered a terminal malfunction on June 20 while he was parked at his fellow racer Ron Davies’s shop in Warren, Pa. The loss of generator power left Doar unable to operate, among other things, his rig’s air-conditioning unit – quite a nuisance in the middle of a heat wave – and the lift on his trailer.

With no quick fix available for his generator woes before heading off to the WoO LMS doubleheader in Canada on June 22, Doar relied on Davies’s assistance. Davies had his hauler’s generator reworked to allow Doar to plug into it at the track for the remainder of the swing.

“Ron Davies saved my life,” said Doar, who got his generator back operational when he returned home earlier this week. “If it wasn’t for him getting his generator fixed up so I could plug in, I probably would’ve gone home.”

Doar will be part of a star-studded field on Friday night at Amsoil Speedway, which was unable to host the WoO LMS last year due to a date conflict with the fair also held on its grounds. WoO LMS points leader Darrell Lanigan of Union, Ky., who finished second in the tour’s 2010 stop at Amsoil, and streaking Tim McCreadie of Watertown, N.Y. (sixth at Amsoil in ’10) will lead the invasion.

The WoO LMS roster will also include defending champion Rick Eckert of York, Pa. (10th at Amsoil in ’10), Chub Frank of Bear Lake, Pa. (seventh), Shane Clanton of Fayetteville, Ga. (eighth), Clint Smith of Senoia, Ga. (14th) and Tim Fuller of Watertown, N.Y. (24th because he retired early while recovering from an appendectomy just days earlier). World of Outlaws regulars who will make first-ever visits to Amsoil include Vic Coffey of Caledonia, N.Y., John Lobb of Frewsburg, N.Y., and Rookie of the Year contenders Bub McCool of Vicksburg, Miss., Kent Robinson of Bloomington, Ind., and Jack Sullivan of Greenbrier, Ark.

Other drivers expected to compete include Jimmy Mars of Menomonie, Wis., who won the 2010 WoO LMS event at Amsoil; Brady Smith of Solon Springs, Wis. (fourth in ’10); and Brian Birkhofer of Muscatine, Iowa (fifth).

Hot laps are scheduled to start at 6:30 p.m. on Friday with time trials set to begin at 7 p.m. Also part of the program will be Amsoil’s Midwest Modifieds and the Amsoil Speedway Pure Stocks.

More information on Amsoil Speedway is available by logging on to www.amsoilspeedway.com or calling 218-349-7367.