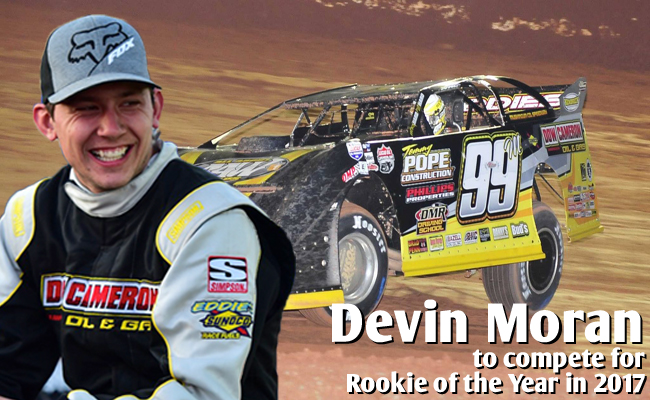 Will compete for the 2017 Rookie of the Year Title

CONCORD, N.C. (December 8, 2016) – Appearing for the first time on the World of Outlaws Craftsman® Late Model Series stage for the 2017 season is Devin Moran, running in the Ty Twarog Racing No. 9 car accompanied by his DMR team.

The 22 year-old has been absorbing all things racing since he was born. His father, Donnie Moran, was a top-late model driver from the 1980’s through the early 2000’s, only suppressing his passion for driving to focus on his son’s passion for the same thing.

“I am very grateful for him and my Mom they would do anything and everything that they could for me and my other four siblings,” Moran said. “My Dad taught me pretty much everything I know about this racing stuff. So if it wasn’t for him I obviously wouldn’t even be getting this ride right now and I wouldn’t know nearly as much as I do about racing.”

Racing runs true in the Moran family bloodline, as the torch has been passed down for three generations. Ronnie Moran [Devin’s Grandfather] entered the racing industry as a car owner – Ronnie started owning cars when Donnie was in diapers.

Donnie caught the racing bug when he began to race at the age of 16, ultimately becoming very influential in the industry. During his successful career, he was selected to be member of the National Dirt Late Model Hall of Fame in 2002.

Following in his Grandfathers and Fathers footsteps, Devin appeared in the Late Model scene at the tender age of 14. Once completing high school Devin was able to commit more time to the sport of the racing and to the traveling that goes along with it. During the 2014 season Devin would go on to win 18-feature events at several various race tracks.

“It’s always been a family tradition with our deal, and I’m glad to kind of keep it that way,” Devin said.

Devin remains bright-eyed about the upcoming season with the Outlaws and looks forward to running with the series as a full-time driver.

“I love going to new tracks and different places. I know there’s a bunch of new tracks I will get to go to this year and hopefully I just adapt to them quickly and we get some good runs,” Devin said. “I am looking forward to Fairbury [American Legion Speedway] because I’ve never got to run there before. I’ve raced at Cedar Lake [Speedway] once before but I know that was always one of my Dad’s favorite places to run so I can’t wait to go back there. There’s also a few tracks out West I’m excited for like Salina Highbanks [Speedway].”

For the upcoming season, Devin is hopeful that he will be a strong competitor for the Rookie of the Year title and finish among the top five in the Championship Points Standings. He also is looking forward to completing the tour with the series that allows him to visit a lot of new tracks and towns.

The complete 2017 World of Outlaws Craftsman Late Model Series schedule can be found here. Tickets for select events are on-sale now at dirtcar.ticketforce.com or by calling 844-DIRT-TIX (347-8849).