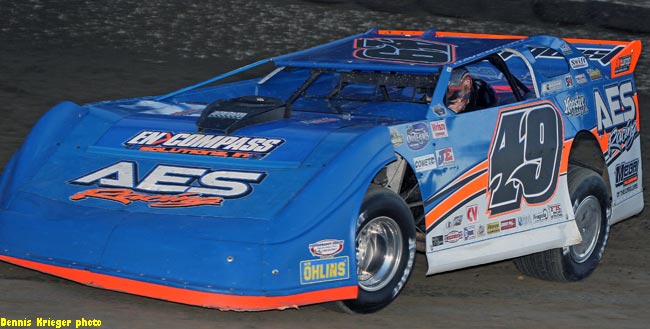 PINE HALL, NC – April 18, 2013 – Jonathan Davenport is arguably the hottest dirt Late Model driver in the Southeast over the past month, but is he hot enough to deal with some of the country’s best touring stars? He’s about to find out.

This Saturday night (April 20) Davenport will enter the 50-lap, $10,000-to-win World of Outlaws Late Model Series event at 311 Motor Speedway, kicking off three consecutive weekends in which the 29-year-old native of Blairsville, Ga., plans to compete with the national tour throughout his home region. For Davenport, it’s the most important stretch of action in his fledgling tenure as a driver for the AES Racing team.

“We’re definitely focusing on the next three weeks,” said Davenport, who owns two career WoO LMS A-Main victories, both at The Dirt Track at Charlotte in Concord, N.C. (2010 and ’11 World Finals). “Even though we’ve been running good we haven’t really run too much on the national level yet, so we’re ready to test ourselves. I feel like we’re hitting our stride so hopefully this is a really good time for the Outlaws to come into our area.”

Former racer Mike Fulp’s half-mile 311 Motor Speedway would seem a perfect place for Davenport to start his challenge of the World of Outlaws stars. The venerable track sits about 45 minutes northeast of his current residence in Clemmons, N.C., and just over an hour’s drive southeast of the AES Racing shop in Mt. Airy, N.C., so he’ll basically be racing in his backyard. He’s also coming off a victory in an April 6 Carolina Clash Series event at 311, demonstrating his ability to negotiate the oval after a long absence from competition there.

“That was the first time I’d run there in about three years,” Davenport said of his visit to 311 Motor Speedway two weeks ago. “But it was pretty much just like I remembered it. It’s just a regular ‘ol Carolina racetrack, pretty good sized and fast.

“We unloaded good that night and everything basically went well for us. It ended up being a pretty big night for us because it was my first Clash win in years (since 2008) and it was the first win for Hoosier (Tire) in the Clash deal in a while.”

Whether Davenport’s 311 tuneup provides him an edge versus the Outlaws on Saturday night remains to be seen, but he did learn some valuable lessons.

“As far as what I have to do to my car (at 311), running there a couple weeks ago will definitely help us out,” said Davenport, who drives machines constructed by veteran chassis builder Barry Wright. “But tire wise, it’s put a big question mark in my head. Now I’m kind of confused about what to do on tires when I go back up there. The spec (Hoosier) tire that we had to run (in the Clash event) was actually a little better than I thought it would be versus our open-competition stuff, so we’re gonna have to decide which way to go.”

Davenport will go to the post at 311 seeking his fifth win in the last six weeks. After starting slow as he got acquainted with the AES Racing operation (including a trip to February’s WoO LMS tripleheader at Bubba Raceway Park in Ocala, Fla., that saw him follow finishes of 19th and 13th with a DNQ in the finale), the driver known as ‘Superman’ caught fire come spring. He was triumphant four straight weekends, preceding his 311 score with wins in Southern All-Star events on March 16 at East Alabama Motor Speedway and March 23 at Smoky Mountain Speedway in Maryville, Tenn., and a $30,000 checkered flag in the Carolina Crown special on March 30 at Lancaster (S.C.) Motor Speedway.

It appears that Davenport is reclaiming the rhythm he enjoyed while driving the Barry Wright house car from mid-2009 through the end of the 2011 season. After struggling last year on the Lucas Oil Late Model Dirt Series in his first – and ultimately only – season driving for NASCAR star Clint Bowyer’s dirt Late Model team, Davenport’s move to AES Racing has returned him to the independent, pick-and-choose schedule that treated him and Wright so well.

“We’ve really come together good,” said Davenport, who has been competing in the dirt Late Model division for a decade. “We did a lot of testing at the start of the year with different cars and different ideas, but we kind of narrowed it down to a few things that we like better than others and we’re going forward with our program now.

“We’ve really hit on a few things here lately that have worked good for us and we’re going to the races that make the most sense for us,” he continued. “We’re kind of picking our battles and going where we’re good. Once we get rolling good and get confidence in our stuff, we’ll venture out and go run some places I haven’t been at too many times.”

Davenport could certainly give his team’s confidence a tremendous boost with a WoO LMS victory at 311 Motor Speedway, which is hosting the renowned circuit for the second consecutive season. He will have to outduel a star-studded roster of drivers, including defending WoO LMS champion Darrell Lanigan of Union, Ky.; two-time titlist and current points leader Josh Richards of Shinnston, W.Va.; 2006 champ Tim McCreadie of Watertown, N.Y., who won last year’s tour event at 311; Shane Clanton of Fayetteville, Ga.; and 2011 champion Rick Eckert of York, Pa.

More information is available by visiting www.311motorspeedway.com or calling 336-413-0744.