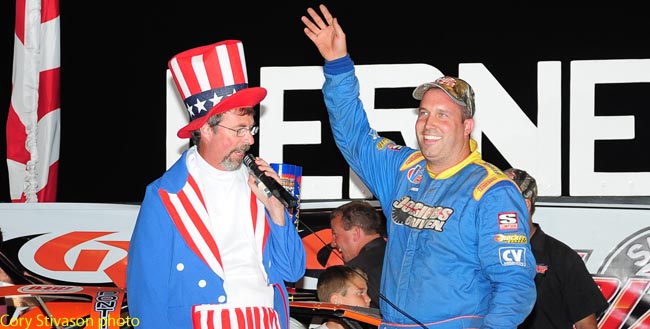 SARVER, PA – June 17, 2011 – The 2011 World of Outlaws Late Model Series has been a struggle for Shane Clanton, but he senses a change in fortune just around the corner.

Clanton, after all, is headed back to Lernerville Speedway on June 23-25 for the fifth annual Firecracker 100 presented by GottaRace.com. It’s a track that happens to provide the standout driver from Fayetteville, Ga., a natural pick-me-up.

“I love the place,” Clanton said of the four-tenths-mile oval known as ‘The Action Track.’ “It’s been a good racetrack to me. It seems like every time I’m running bad, I just go there, run good and boost my momentum.”

Clanton, 35, is the defending champion of the Firecracker 100, a three-day WoO LMS spectacular that this year features 30-lap, $6,000-to-win preliminary A-Mains on Thurs., June 23, and Fri., June 24, and the long-distance, $30,000-to-win finale on Sat., June 25. He will bid to become the first repeat winner of the blossoming event – and, in turn, snap out of an uncharacteristic early-season funk on the national tour.

Through 10 WoO LMS events in ’11, Clanton is not only winless but has yet to record even a single top-five finish. He’s mired in eighth in the points standings, a distant 132 points behind leader Rick Eckert of York, Pa.

But despite his slow start, Clanton remains remarkably upbeat about his situation. He attributes his struggles to the growing pains associated with figuring out his new equipment, a Capital Race Car chassis that he designed in partnership with former Dirt Track World Championship winner Marshall Green.

“It’s not disappointing,” Clanton said of his quiet results so far this season. “I knew the challenge that we took on. We knew there would be a lot more downs than ups with this new deal. We’re basically on our own and learning about this Capital car on the fly. We don’t have a bunch of cars out there to go off of, so we don’t have a sure enough baseline (setup) to go back to yet.

“I think we’re steadily gaining on our car, though, and hopefully by the Firecracker we’ll be where we want to be. I know I feel good about going (to Lernerville) with a Capital car. I can’t wait to get there.”

Clanton’s RSD Enterprises team will enter a virtually brand-new Capital machine in the Firecracker 100. A replacement for the Capital car that he began the season with but recently sold, Clanton debuted the fresh mount on June 4 in a weekly event at Dixie Speedway in Woodstock, Ga., and steered it to a second-place finish.

“We have another new car on the jig right now and should have it finished in a couple weeks to use as a backup,” said Clanton, who should also begin receiving more technical feedback with Capital cars now being run by Southeastern standout Casey Roberts and a local Georgia racer. “Until then we’ll have a Rocket (chassis) with us in the trailer for a backup.”

Clanton won last year’s Firecracker 100 behind the wheel of his Rocket car. He started fifth and spent much of the distance running behind leader Tim McCreadie of Watertown, N.Y., before grabbing the top spot for good on a lap-72 restart.

The $30,000-plus triumph wasn’t the biggest of Clanton’s career – that honor belongs to his 2008 World 100 win at Ohio’s Eldora Speedway – but it definitely was one of his most emotional successes. It exorcised his personal demons at Lernerville – while he adores the track and runs extremely well there, it’s also where he suffered a separated shoulder in 2005 and ‘lost’ the Firecracker in ’07 (Scott Bloomquist of Mooresburg, Tenn., made a fortuitous switch to the outside line just as Clanton appeared set to sweep into the lead) and ’08 (an early tangle with Josh Richards of Shinnston, W.Va., effectively ended his hopes) – and highlighted his comeback from a January 2010 health scare in which his life was threatened by the aggressive, flesh-eating strep bacteria that infected his left thumb and poisoned his blood.

“It felt great to finally get a win at the legendary Lernerville Speedway,” said Clanton, who owns 14 career victories on the WoO LMS. “I’ve always run good there, but I never had the finishes to show for it – until last year.”

Now Clanton is eyeing a Firecracker 100 repeat at a speedway he wishes could host every WoO LMS event.

“It’s one of the best tracks in the country,” raved Clanton. “I think that’s because you can start just about anywhere in the field and win if you’ve got a good enough car. It’s not necessarily wide-open all the time – it might be for hot laps and qualifying, but then in the heats and for the rest of the night you can maneuver around and race to the front from the middle of the pack. It’s everything a driver wants in a racetrack.”

And it’s a perfect site to host the Firecracker 100, a racer- and fan-friendly weekend that is packed full with memorable racing and off-track entertainment.

“I don’t think there’s nothing like it,” Clanton said of the Firecracker 100. “It’s getting to be a big deal after just four years. It’s a fun weekend for everybody.

“I always look forward to going to Lernerville, especially for the Firecracker. The fans there are phenomenal and that adds to it. They like what we do and hopefully they’ll keep supporting us so we can keep running big races there.”

Clanton will be one of four former Firecracker 100 winners in this year’s field, joining Jimmy Mars of Menomonie, Wis. (2009), Brian Birkhofer of Muscatine, Iowa (2008) and Bloomquist (2007). A hungry group of Clanton’s fellow World of Outlaws travelers will also populate Lernerville’s pit area, including the high-flying Eckert (winner of two of the last three tour events), two-time defending tour champion Josh Richards of Shinnston, W.Va. (a preliminary A-Main winner in ’10), Darrell Lanigan of Union, Ky. (three straight runner-up finishes in the Firecracker 100), Tim McCreadie of Watertown, N.Y. (a preliminary race victor last year) and Chub Frank of Bear Lake, Pa. (a recent winner at Lernerville in a Friday-night visit to tune up for the Firecracker).

Three-day reserved seat ticket packages are currently on sale for the Firecracker 100 weekend. Value-priced at $59 for adults and $19 for children 10-and-under, each package includes a free fan pit pass for the Thursday and Friday events and priority access to Saturday’s pre-race driver autograph session when purchased by midnight on June 22, so fans are encouraged to act fast to take advantage of the special deal.

The ticket packages and single-day advance-sale tickets, which are also now available, can be purchased on-line at www.lernerville.com and http://www.dirtcar.com/tickets or by calling 724-353-1511.

Adding even more luster to the event, the weekend includes the Ms. Firecracker pageant and a cornhole tournament after Thursday night’s racing action; fireworks and parking-lot concert by the group NoMAD following Friday’s racing card; and a driver/fan horseshoes tournament, a wienie roast and a driver autograph session underneath the grandstands prior to Saturday night’s program.

Additional info on the Firecracker 100 can be obtained by logging on to www.lernerville.com.

Fans interested in details on the limited number of reserved camping spots still available should call the track office at 724-353-1511.