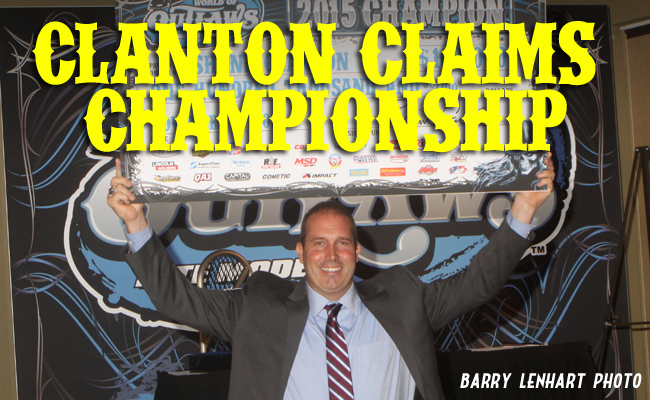 CONCORD, N.C. – Nov. 12, 2015 – An emotional Shane Clanton stood before his friends, family and fellow competitors on Monday afternoon to receive his first World of Outlaws Late Model Series Championship at the annual ‘Night of Champions’ banquet.

Clanton and his Weldbank Energy Racing team were a force through 2015, picking up 10 series wins, including a sweep of DIRTcar Nationals in February and the coveted ‘Big Gator,’ 34 top-five finishes and 37 top-10 finishes. With the $100,000 championship check, Clanton earned $322,320 during the 2015 series season.

“I know for a long time I’ve been sitting at one of them tables,” Clanton said. “Not the first two like Josh (Richards) said. Those have been occupied by Darrell (Lanigan), Josh and (Rick) Eckert for the last seven years, I think. It’s been tough. Brandon (Overton) and (Jordan) Yaggy, I’ve been doing this for a long time, I was back there where you are for the first two years I did this deal. Just keep your head down and work hard and you’ll prevail.

“It’s been a journey. A lot of people have helped me through my career and I never had enough money to do this on my own. Just hard work. I had some good car owners back in the past.”

Clanton thanked his family and crew members Brock Wise and Joe Armistead Jr. for their support.

“It’s a real special week for us. My dad, he’s not here but I know he’s looking down,” Clanton said. “Next Saturday he’s getting inducted into the Hall of Fame in Georgia and that means a lot. This week has been emotional for sure and I know he’s looking down and smiling at everything we’re doing. It means a lot to my family, the next coming week. I just love doing what I’m doing and he put this in me to do what I’m doing and it’s very special.”

In addition to his 10th place position in the championship points standings, Brandon Overton was named the 2015 Rookie of the Year presented by ButlerBuilt and received a $10,000 bonus. He congratulated his fellow rookie of the year contender Jordan Yaggy.

“(Jordan) deserves to win this thing as much as I do,” Overton said. “He and his family are probably the nicest people I’ve ever met. I’m proud of finishing 10th and this rookie deal but more than that, this thing is tough. I really didn’t know what I was getting into and, like I said, it’s just a struggle to keep going. Last night when I took that checkered flag at Charlotte, I didn’t win a race and all, but it made me feel so good that I stuck it out through all the bad. I finished it out and I won the rookie. I’ve got to thank everyone else who helps me.”

Overton also received the Raye Vest Memorial Pill Draw Award for the best average pill draw of the season. The award came with a $500 bonus.

Josh Richards, a three-time series champion who finished second in the points standings this season, received the award for the worst average pill draw and a $500 bonus.

Matt Curl and Gunner Sullivan, promoters of Fairbury (Ill.) American Legion Speedway, were honored as the 2015 World of Outlaws Late Model Promoters of the Year.