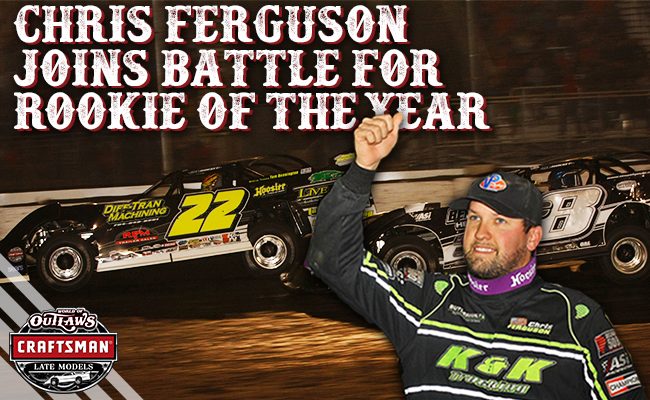 MOUNT HOLLY, NC–Jan. 2, 2018– Chris Ferguson has spent the past few seasons getting all the pieces into place – which would allow him to take his racing program to the next level. With the 2018 season now rapidly approaching, the North Carolina racer is excited to announce that he’s prepared to tackle the national scene.

“With a lot of hard work by my team and amazing support from so many marketing partners, I’m excited to announce that I’ll be joining the World of Outlaws Craftsman Late Model Series as a regular for the 2018 season,” Ferguson commented on Tuesday morning. Our goal is to claim the Rookie of the Year title and finish in the Top-10 in series points.”

Ferguson previously looked to pursue the World of Outlaws tour back in 2016, but the timing wasn’t right for the talented, young driver.

“That was kind of a last-minute deal back in 2016, and honestly, we weren’t prepared,” Ferguson recounted. “We struggled out of the gate because we weren’t as ready as we needed to be, so we pulled the plug after Speedweeks. This year we are infinitely more prepared, and I couldn’t be more excited.”

Ferguson’s run at the 2018 Outlaws tour is being made possible with support from principal sponsors, which include Diff-Tran Machining, K and K Trucking, Live Oak Aesthetic and Family Dentistry, Champion Spark Plugs, the Christopher Reeves Southeast Foundation & Crawlspace Repair, The Racing Warehouse, and Carver and Sons Roofing.

“It’s pretty humbling to have all these great marketing partners supporting my racing dreams,” Ferguson noted. “Without their incredible support, there’s no way that I could be taking on such a huge task. Hopefully this time next year we are talking about how successful a rookie campaign we experienced, as we are preparing for our sophomore season on the road.”

Chris will kick off his pursuit of the World of Outlaws Craftsman Late Model Series Rookie Title on February 9-10 at Georgia’s Screven Motor Speedway. A Friday show will post an $8,000 top prize, while Saturday’s feature will offer a $10,000 top prize.

“We’ve had success at Screven Motor Speedway, so I’m hoping we can hit the ground running out of the gate with some strong runs there,” the 28-year-old racer said. “We’ve got everything we need to be successful, and now I just need to do my job. I know there will be ups and downs along the way, but I have zero doubt that my team and I are up to the challenge.”