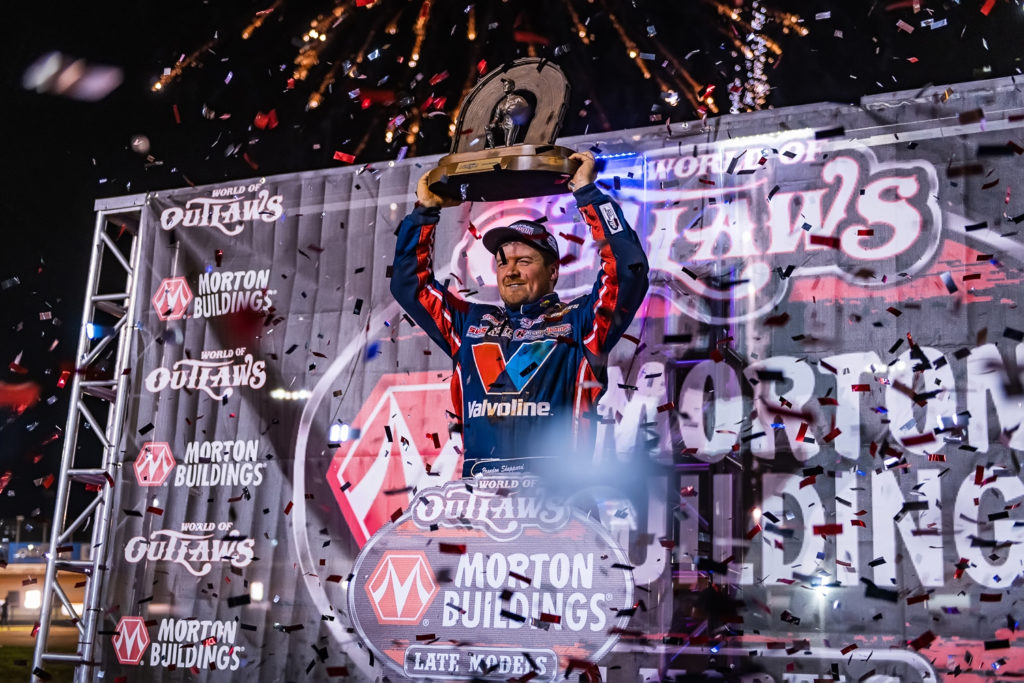 While a gloomy cloud of uncertainty hung over most of motorsports – and the world – throughout 2020, one thing remained as constant and consistent as ever: the dominance of Brandon Sheppard.

In his fourth full season as a platinum driver with the World of Outlaws Morton Buildings Late Model Series, the New Berlin, Ill. native extended his reign as the current king of the Outlaws. His 2020 championship was his second-straight and third in the last four years with The Most Powerful Late Models on the Planet.

At 27-years old, The Rocket Shepp is already one of the most accomplished racers in the 19-year history of the series. His third title equals him with Billy Moyer Sr. and Darrell Lanigan for the second-most, putting him just one title shy of tying Josh Richards for the most crowns in history.

On pace to shatter the record books, Sheppard will enter the 2021 season with 69 career wins to his credit, only eight behind Richards (77) for the most Morton Buildings Feature Wins in series history.

Since joining forces in 2017 and following the Outlaws nationwide, Sheppard and Rocket1 Racing have been the most dominant force in dirt late model racing. In those 164 starts, B-Shepp has recorded a whopping 63 wins, 112 podium appearances, 137 top five finishes, 149 top ten results, 34 fast time awards, and 90 Drydene heat race wins – the most in every single statistical category over that span.

“This feels so incredible, man,” Sheppard acknowledged while soaking in his third title. “This team, these sponsors, everyone involved; it’s unbelievable what we’ve been able to accomplish these past few years. It feels amazing, I just hope we can keep it going. I know this is racing though and you never know when it’ll run out. We’re taking this in stride and rolling into next year with bigger goals in mind.”

Clinching this year’s 2020 championship heading into Last Call at The Dirt Track at Charlotte, Sheppard officially ended the season with a 282-point advantage on runner-up Ricky Weiss. His 14 wins, 31 top fives and 36 top tens in 40 starts was unmatched in every category, as he commanded the points lead almost all season long.

Among his 14 wins this year was a $20,000 Fourth of July triumph at Cedar Lake (Wisc.) Speedway, a win by .007 seconds in the closest finish in series history at Davenport (Iowa) Speedway, a four-race winning streak through Wisconsin in July, a Firecracker preliminary score at Lernerville (Pa.) Speedway, and four different wins in the state of Pennsylvania, among many more memorable moments.

The father of Jace and Addison, and fiancé to Mikala, offered up some wise words as he was officially crowned champion again. Explaining perseverance and determination have been the biggest key factors in his success.

“You never give up; that’s something my dad [Steve] instilled in me when I was growing up,” Sheppard candidly spoke. “You never quit and you never say you can’t do something. I’ve lived by that my whole life. These guys at Rocket they push me to be the best that I can be and that carries over to the B5 as well. Everything in life honestly boils down to that. You just never give up.”

With the usual end-of-season banquet cancelled due to COVID-19 guidelines, Sheppard and the rest of the World of Outlaws Morton Buildings Late Model Series competitors visited the World Racing Group office in Concord, N.C. on Friday morning to pick up their points fund payout and take home their hardware.

For his efforts, Sheppard earned $100,000 as the series champion to go along with the iconic World of Outlaws championship trophy and a beautiful championship ring.

In 2021, Sheppard will be back in the Rocket1 Racing No. 1 for his fifth year on tour. With nearly 60 races on the schedule, the Illinois boy will have a grueling season to contest with his record-tying fourth championship on the line.