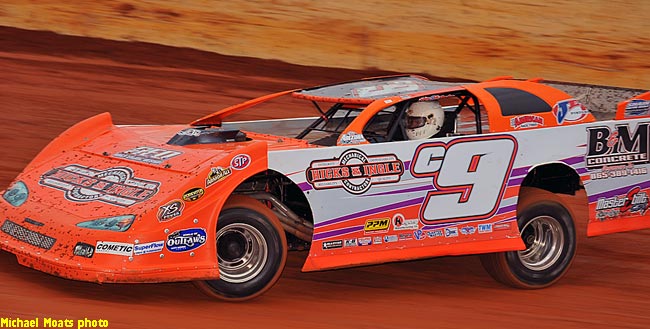 MIDDLEBOURNE, WV – May 23, 2013 – One year ago Steve Casebolt Jr. was a serious contender for victory in the inaugural Jackpot 100 Presented by NAPA Auto Parts at Tyler County Speedway, finishing third in what was just his second start of the season following an eight-month break from dirt Late Model racing.

This weekend (May 25-26) the 34-year-old driver from Richmond, Ind., is planning a return to ‘The Bullring’ for the second annual World of Outlaws Late Model Series event – and this time he won’t be battling any rustiness when he hits the quarter-mile oval’s clay surface.

Casebolt enters Tyler County’s holiday-weekend spectacular – now a two-day program featuring a 30-lap, $6,000-to-win A-Main on Sat., May 25, and a 70-lap finale with a $15,000 first-place prize on Sun., May 26 – with the type of momentum that stamps him as a formidable foe for the traveling WoO LMS superstars. Most notably he’s just one week removed from clinching the championship of Ray Cook’s Spring Nationals series, but he also has a big-money unsanctioned victory and two other feature wins on his performance ledger and last month nearly captured a WoO LMS A-Main.

It’s a revitalized Casebolt who will take on the Outlaws this weekend in Tyler County’s Jackpot 100 Presented by NAPA and Friday night (May 24) in the Buckeye 50 at NAPA Wayne County Speedway in Orrville, Ohio. After a relatively quiet 2012 campaign fielding his own team, he’s found new life with his move to the Kingston, Tenn.-based D&R Motorsports operation.

“It’s been a really good season so far,” said Casebolt, who made just 28 starts in 2012 (three wins, eight top-fives, 11 top-10s) but already has 18 races under his belt this year with three wins, 10 top-five and 13 top-10 finishes. “We started off the season with a bang by going out and winning that Bama Bash (a $16,016 score on March 2 at Alabama’s Green Valley Speedway) right out of the box. We got a second (in the April 26 WoO LMS event) at Smoky Mountain (in Maryville, Tenn.), we won this month at (Georgia’s) Dixie Speedway (Spring Nationals) and (Tennessee’s) Cleveland Speedway (Southern All-Stars) and we won the Spring Nationals (points). Right there, that’s some things we’re happy about.”

Most of Casebolt’s action this season has come at tracks in the Southeast that are within a reasonable driving distance of the D&R Motorsports shop, which sits west of Knoxville, Tenn. Focusing on that region of the dirt Late Model world is unusual for a born-and-bred Hoosier like Casebolt, but he has no qualms about stepping away from his usual stomping grounds.

“I don’t care where the guys I drive for are from as long as they want to race and can afford to do it,” said Casebolt, who has raced primarily in the Midwest except for the five-year period (2006-2010) when he traveled nationally with the Lucas Oil Late Model Dirt Series. “I can’t drive to Tennessee every weekend to race local races (the D&R Motorsports headquarters is nearly five hours from Casebolt’s home), but there are so many good races in their area for four-grand or more to win that it’s worthwhile for me to make the trip to run ’em.”

But Casebolt also still wants to tackle some major events at tracks he’s more familiar with, and that’s what he expects to do this weekend. He convinced D&R Motorsports co-owners Danny Dishman and Ron Ivey, who hired Casebolt after their successful partnership with dirt Late Model veteran Ray Cook of Brasstown, N.C., ended in late 2012, to bypass some holiday-weekend shows near their home base and instead haul north to attempt a WoO LMS hat trick.

Casebolt is looking forward to his assault on Tyler County, a track he ranks as one of his favorites.

“It’s just the type of track that I like to race on,” said Casebolt. “You can just race all over that place. It’s a little track, but it races like it’s a bigger track. When you get out there you can race three- and four-wide no problem.

“If I personally was ever gonna build a racetrack, I’d try to model it a little bit after the size and shape of that place.”

According to Casebolt, it’s no accident that Tyler County typically draws large fields of cars for its specials. It’s a speedway that keeps all entrants in the mix.

“The smaller tracks like Tyler County are easier on your engine usually,” said Casebolt. “You might get some sheet metal beat and banged around at a bullring, but you’re not gonna kill your engine. You go to some of these tracks that are a half-mile and bigger and your low-level teams often don’t even show up because they’re afraid they’re gonna lose an engine or they think they need a $40,000 engine to compete.

Casebolt figures to have a better chance at grabbing the checkered flag than most competitors. He’s proven in past visits that he knows how to get around Tyler County.

“We’ve always run well and been pretty fast at Tyler County but just haven’t had a whole lot of luck,” said Casebolt. “I’ve had a few opportunities to win races there and had stuff happen. One time I lost an engine, overheated, when I felt like I really had a shot to run up front, and another time I got taken out of a Hillbilly 100 that I thought we had a shot at.”

And in last year’s Jackpot 100 Presented by NAPA, which was run as a single 100-lapper, he ran second to eventual winner Darrell Lanigan of Union, Ky., for most of the distance before slipping to third following a late restart.

“We could keep up with Lanigan early,” remembered Casebolt. “We were actually passing him for the lead at one point, but then it went green forever – and it seemed like the longer it did, the better he got and the worse we got.

“I don’t want to say we were just barely hanging on when we were in second because we were like half a track ahead of third, but our tires were shot. And then, when we got a yellow late, our tires didn’t really get any better on the restart and that allowed (Brandon) Sheppard to get around me for third. We were a solid second-place car before that restart.”

Casebolt, who has driven his own MasterSbilt car – equipped with D&R Motorsports’ Race Engine Design powerplants – in all his starts this season while Dishman and Ivey ready their own machine for his use (Cook owned the cars he drove for D&R last year so the team was left with everything to race except cars after their split), is confident that he can break through at Tyler County. A victory would make him the first driver hailing from Indiana to ever win a WoO LMS A-Main – and at least help him cast aside bitter memories of his tough runner-up finish in last month’s World of Outlaws event at Smoky Mountain.

“I was pretty disappointed over that Smoky Mountain thing,” said Casebolt, who felt he used the wrong strategy in his pursuit of winner Shane Clanton of Zebulon, Ga. “I probably messed that up. I probably should’ve done something different.

“I think about that kind of stuff all the time. I’m still thinking about races I should’ve done something different in four years ago.”

He paused, and then said, “If we’re in contention again this weekend, hopefully I’ll make the right moves.”

Casebolt will face plenty of stiff competition at Tyler County. Lanigan, the defending WoO LMS champion, will lead the national tour’s charge as he chases another high-dollar victory at the The Bullring. Clanton, meanwhile, enters the weekend as the tour’s hottest driver with wins in two of the last three events, while points leader Josh Richards of Shinnston, W.Va., will continue his chase of his first-ever feature win of any kind in his home state.

While the Jackpot 100 Presented by NAPA Auto Parts alone represents a spectacular Memorial Day weekend attraction, the WoO LMS action will be accented by other exciting entertainment. The purchase of a four-day, all-access ticket for just $80 grants admission to the May 25-26 WoO LMS programs – which also include the $7,555-to-win ‘Let It Ride 55’ for the Renegades of Dirt Modifieds Tour and a $2,000-to-win Fastrak Crate Late Model event – plus a support-division qualifying card on Thurs., May 23, and a giant country-music concert on Fri., May 24, featuring recording artists Colt Ford, Justin Moore and Zack Paxson.

The all-access tickets also include pit admission for the races. Single-day tickets for admission to the races and concert will also be available.