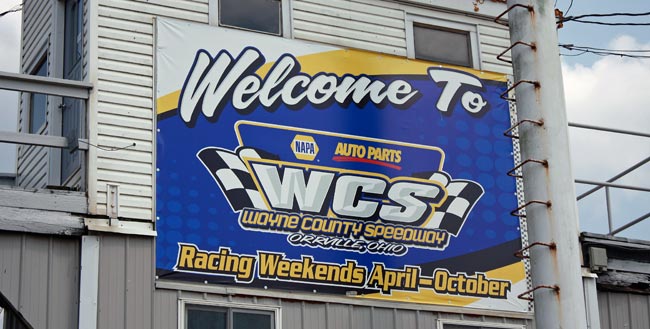 ORRVILLE, OH – April 9, 2013 – The World of Outlaws Late Model Series ‘Buckeye 100’ scheduled for this weekend at NAPA Auto Parts Wayne County Speedway has been condensed to a one-day program on Saturday evening (April 13) topped by a 50-lap A-Main paying $10,000 to win, track and series officials announced on Tuesday afternoon.

With unfavorable weather conditions forecast for the start of the inaugural Buckeye 100 weekend, WCS co-promoters Jason and Kristin Flory collaborated with WoO LMS director Tim Christman on a contingency plan for the event. Both parties agreed to scrap the originally scheduled multi-day, 100-lap program and run a single-day card on Saturday night.

“All of us at NAPA Auto Parts Wayne County Speedway have been excited for months about the first Buckeye 100 weekend, but we don’t want to run such a huge event in conditions that would be miserable for fans and race teams,” said Jason Flory, who is starting his second full season of promoting the three-eighths-mile oval with his wife. “With forecasts calling for rain on Thursday (practice night) and then unseasonably cold temperatures and a chance of rain and/or snow on Friday, we felt that we didn’t want to have everyone travel to the speedway and face the possibility of sitting for a couple days without racing or competing in weather that would make the weekend unenjoyable.

“We decided that the best option is to condense the weekend into a single night of racing on Saturday. We understand that Saturday’s forecast still calls for cool temperatures, but it appears likely we’ll stay dry so running the ‘Buckeye 50’ that day should allow us to host the only World of Outlaws Late Model Series event in Ohio this season.”

Flory added that track and WoO LMS officials will work together on Saturday to expedite the racing program, which will see the WoO LMS A-Main run first. Also in action will be the Renegades of Dirt Modifieds Series ($2,000 to win) and the track’s Thrifty Discount Muffler Super Stocks ($500 to win).

Pit gates are scheduled to open at 1 p.m. on Sat., April 13, and spectator gates will be unlocked at 2 p.m. Hot laps are set to begin at 5:30 p.m. with WoO LMS Ohlins Shocks Time Trials and racing to follow.

General Admission to Saturday’s show will be $30, with children ages 6-12 admitted for $15 and kids 5-and-under free of charge. Pit passes will be $45.

Fans who bought two-day passes for the Buckeye 100 weekend in advance will be refunded the difference between their purchase price and the cost of Saturday’s General Admission tickets.

NAPA Auto Parts Wayne County Speedway is located nine miles east of Wooster, Ohio, or 15 miles west of Massillon, Ohio, on US Rt. 30, then one mile north on Carr Road.