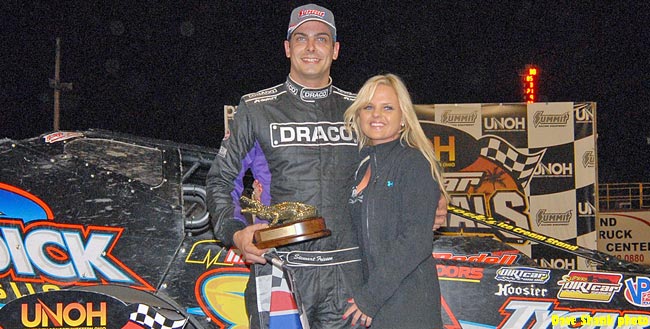 FONDA, NY – June 13, 2013 – The racer in Northeast Big-Block Modified star Stewart Friesen wants to run every big-money special show at his home track, regardless of the division featured.

So it’s no surprise that Friesen, a personable, hard-charging 29-year-old Canadian who has become one of Big-Block Modified racing’s most high-profile names, jumped at an opportunity to compete in the inaugural World of Outlaws Late Model Series event at Fonda Speedway on Wed., June 19. He is set to make his dirt Late Model debut at the half-mile oval he knows well behind the wheel of a second Rocket Chassis car from WoO LMS veteran Chub Frank’s stable.

The challenge facing Friesen in his first-ever dirt Late Model attempt will be formidable, but Fonda’s defending Big-Block Modified champion is anxious to take it on.

“It’s gonna be a little bit of a change of pace but I’m looking forward to it,” said Friesen, a native of Niagara-on-the-Lake, Ont., who now races out of Sprakers, N.Y., just minutes from Fonda Speedway. “We’ve done O.K. the few times we’ve run a Sprint Car, so adapting quickly to a new type of car is something I think we can do. Between hot laps and time trials, there should hopefully be enough time to figure things out to where we can at least be competitive.”

Frank, 51, of Bear Lake, Pa., certainly believes that Friesen has the talent to handle a dirt Late Model. He’s never met the young sensation, but he’s seen him race several times during WoO LMS/DIRTcar Big-Block Modified doubleheaders at tracks like Volusia Speedway Park in Barberville, Fla., and The Dirt Track at Charlotte and he’s well aware of Friesen’s exploits across the Northeast.

“I know he’s pretty fast,” said Frank, who will make his first career start at Fonda. “I read the (racing) paper and pay attention to who’s doing what in the other classes, and every time I open it up I see his name in the headlines so I know he’s a helluva racer.”

Friesen has been tearing up the Big-Block and 358-Modified ranks in recent seasons, rolling up impressive win totals and multiple track titles. A driver with a true racing pedigree – his family has long owned and operated Ransomville (N.Y.) Speedway, and his grandfather, father, two uncles and two cousins have all driven race cars – Friesen is coming off an especially spectacular 2012 campaign that saw him lead the Northeast short-track scene in feature wins (28) and register 70 top-five finishes in 97 overall starts.

The first Canadian and one of just six drivers to win DIRTcar Big-Block Modified racing’s most prestigious event, the VP Small Engine Fuels 200 at the one-mile New York State Fairgrounds in Syracuse, N.Y., in back-to-back years (2010-11), Friesen competed regularly at the famed Fonda facility for the first time in 2012. He promptly dominated the weekly action, winning eight features and the Big-Block Modified title.

Friesen has continued his checkered-flag onslaught this season. He’s won four features at Fonda, including the last two, and leads the points standings heading into the summer. Overall he’s won nine times at five different tracks, including a February score during the UNOH DIRTcar Nationals by Summit at Volusia and a triumph in the Super DIRTcar Series opener on June 6 at Rolling Wheels Raceway Park in Elbridge, N.Y.

“McCreadie and those guys say Late Models handle so much better than a Modified,” said Friesen. “They say it’s a more of an aggressive style of driving, which I think should be cool.”

Will Friesen’s experience at the unique, egg-shaped Fonda layout help him adapt to Frank’s No. 1* dirt Late Model? He hopes it will be of some assistance during a WoO LMS program that will be topped by a 50-lap, $10,000-to-win A-Main and include such traveling full-fender stars at Frank, McCreadie, Fuller, Josh Richards of Shinnston, W.Va., Darrell Lanigan of Union, Ky., Rick Eckert of York, Pa., and Shane Clanton of Zebulon, Ga.

“Maybe where the throttle and brake points are should be pretty similar to the Modified on a heavy track,” said Friesen, who has 14 career victories at Fonda. “I’ll just have to see once I get in the car and hot-lap. Obviously the size of the car and the shape of the car is something new to me, and the four-link (setup) is kind of new to me. Those different characteristics will take a little bit to figure out, but at least I’ll know the racetrack.

“No matter what happens, it’s going to be a neat experience. I’m real excited to have a chance to drive Chub’s car.”

Friesen will pull double-duty on June 19, competing for a $3,000 top prize in the 30-lap Big-Block Modified event that is also on the evening’s card. He will arrive at Fonda the day after putting in a different sort of double-dip: on Tuesday night (June 18), he will not only enter the Super DIRTcar Series ‘Dirty Jersey 60’ at New Egypt (N.J.) Speedway but also co-promote the Big-Block Modified special with Brett Deyo – his first stab at event promotion.

General admission is $30. Tickets for children ages 6-11 are $3 and kids 5-and-under will be admitted free of charge.

More information on Fonda Speedway is available by logging on to www.fondaspeedway.net or calling 315-582-3115.

Fonda Speedway is located about 45 minutes northeast of Albany, just off Exit 28 of the New York State Thruway.