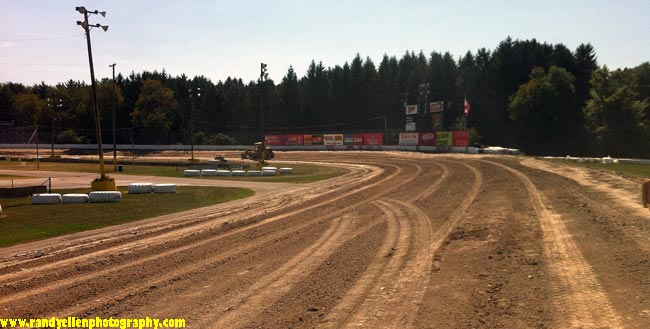 First-Place Prize Of $20,000 On The Line In Keyser Manufacturing ‘Down & Dirty 100’ Presented By NAPA

MARNE, MI – Sept. 12, 2012 – Berlin Raceway’s transformation from an asphalt track to a dirt-covered showplace for one spectacular racing weekend is complete.

More than 300 truckloads of clay now cover the 7/16th-mile oval in advance of the Keyser Manufacturing ‘Down & Dirty 100’ Presented by NAPA Auto Parts, a historic $20,000-to-win World of Outlaws Late Model Series event on Sept. 21-22 that will return the venerable Wolverine State facility to its dirt-track roots.

“Everything has come along great,” said Berlin Raceway general manager Mike Bursley, who co-promotes the venerable speedway with Kurt Dietrich under the DBD Ventures banner. “We’ve had great weather the last couple days to let us get the dirt down without any problems and now it’s just a matter of getting the surface worked in and ready for racing.”

The first truckload of clay was dumped ceremoniously on Berlin’s homestretch last Saturday night following the final checkered flag of the ‘Chet Championship Weekend’ that closed the track’s 2012 pavement racing schedule. Application of the clay commenced full force at 7 a.m. on Monday and continued virtually unabated through Tuesday evening.

Over 7,500 yards of clay – some excavated from the site of an athletic-field construction project at a local college, some from a nearby landfill – has been spread around the track, producing a dirt surface atop the asphalt that is roughly 12 inches thick.

The project has been overseen by Canandaigua (N.Y.) Motorsports Park promoter Jeremie Corcoran, a former DIRTcar big-block Modified driver who has track-prep experience at several dirt tracks in the Empire State. Berlin officials were put in contact with Corcoran during the summer and decided to contract him to handle all work done on the temporary clay surface.

“Jeremie is doing a great job and has been a huge help,” Dietrich, Berlin’s operations and marketing manager, said of Corcoran, who hosted a WoO LMS event at Canandaigua in June. “We are very confident in him and really hope this will make the racers feel good that the track will be prepared right.”

With bulldozing, grading and rolling equipment for the special event provided by the Georgetown Construction Co. in Jenison, Mich., Corcoran has been smoothing the clay since Monday. He expects to spend the remainder of the week discing, watering and packing the surface in preparation for a possible initial test session for local race teams on Saturday.

A full evening of practice for the WoO LMS event and competitors in the weekend’s support divisions is set for Thurs., Sept. 20, from 4-8 p.m. Action will begin on Fri., Sept. 21, with WoO LMS time trials and heat races headlining a program that also includes DIRTcar UMP-sanctioned racing for UMP Modifieds ($1,500 to win), Factory Stocks/Bombers ($350 to win) and 4-Cylinders/Mini-Stocks ($125 to win). The grand finale on Sat., Sept. 22, features WoO LMS B-Mains and the Keyser Manufacturing ‘Down & Dirty 100’ Presented by NAPA, plus another full UMP Modified show paying $1,500 to win and a $400-to-win Street Stock event.

Racing is scheduled to begin at 7 o’clock each night of the weekend, which is generating plenty of buzz in the Michigan racing community. It’s a throwback race for Berlin, which opened for business in 1950 as a dirt track but has exclusively presented asphalt action since 1966.

“So many people are talking about it,” said Bursley. “And we’ve seen people stopping in constantly the last couple days to check out the dirt going down on the track, including a lot of people who remember the dirt days at Berlin back in the ’50s and ’60s.”

“I haven’t seen this much excitement about an event I don’t think ever,” added Dietrich. “This is going to be a huge weekend for Berlin Raceway. I know that we are like little kids on Christmas morning every time we go out and look at the track to see the dirt (surface), and all the calls we’re getting and tickets we’re selling tells us that a lot of other people are excited too.”

Fans can purchase tickets on-line and obtain the latest information on the event by logging on to www.berlinraceway.com or calling the track office at 616-662-2051.