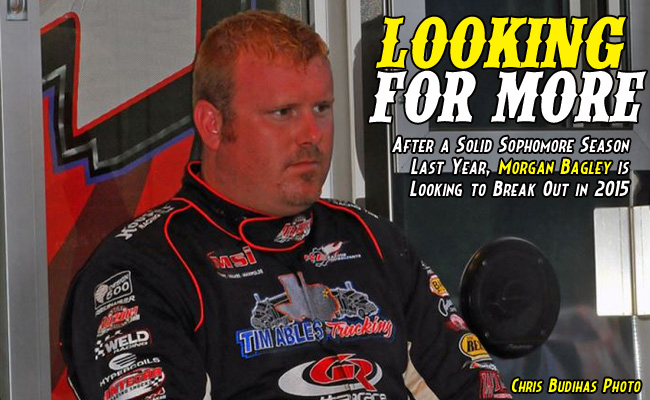 CONCORD, N.C. – Jan. 22, 2015 – Morgan Bagley could be headed for a breakout season on the World of Outlaws Late Model Series.

Coming off one of the best sophomore seasons in WoO LMS history in 2014, the 28-year-old Texan has his eyes set on even more success as he prepares to launch his third year on the national tour with seven series events in Georgia and Florida between Feb. 6 and Feb. 21.

“It’s gonna be tough just like always,” said Bagley, an open-wheel modified graduate who last season became just the second driver in the WoO LMS modern era to follow his rookie season with a top-five points finish in his second year on tour. “But hopefully with the experience we’ve gained and the approach we’re taking we’ll just continue to get better. We’ve been working hard to get prepared and I’m really looking forward to it because I really think we’re gonna have a good season.”

Bagley of Longview, Texas, has plenty of reasons to be optimistic about his chances on the 2015 WoO LMS. After a rookie campaign in 2013 that didn’t quite meet his expectations, Bagley was arguably one of the tour’s most improved drivers in his second go-round last year.

With just one top-five finish in ’13, Bagley never seriously challenged for a series victory and lost out to Eric Wells of Hazard, Ky., for the WoO LMS rookie title while finishing a distant eighth in the championship standings. But ’14 was another story. Bagley was routinely near the front in WoO LMS A-Mains, picking up four top-fives and 19 top-10s in out-pointing sixth-place Wells by 40 points.

Bagley’s most impressive moments came during the Wild West Tour in July. Twice falling just short of claiming his first WoO LMs victory, Bagley logged two runner-up finishes on the swing through the Upper Midwest. He appeared capable of winning both of those races – at Deer Creek Speedway in Spring Valley, Minn., and Brown County Speedway in Aberdeen, S.D. – only to fall victim to eventual 2014 series champion Darrell Lanigan in both events.

While the near-misses were heartbreaking for Bagley and his team, they were a major boost for his confidence. Having at times questioned his ability to be a serious WoO LMS contender, the strong performances and overall improvement validated Bagley’s status as a national touring driver.

“When you go out there and get beat and you’re worn out traveling up and down the road struggling to make ends meet, you can start to doubt yourself,” said Bagley, who in 2015 enters his fifth season of Late Model competition with car owner Wayman McMillan. “There’s been times I’ve asked myself ‘Am I really supposed to be here?’ It’s really easy to get down.

“As hard as this is you’ve gotta stay positive and enjoy yourself and have fun. You’ve got to want to be there and want to be doing it. When you know you can go out and be competitive with these guys it makes it a lot more fun and you feel more like you’re supposed to be there and you deserve to be there.”

Bagley hopes to do more than simply prove he belongs this year. With his confidence boosted by his 2014 success, the usually reserved Bagley is bullish in his outlook for the new season, and he’s confident he’s on the verge of claiming that long awaited first WoO LMS victory.

“I really think we can (win WoO LMS races) and all my guys think we can do it,” Bagley said. “To be honest, I know that we can do it. I can’t tell you where it’s gonna be or how it’s gonna be, but we all feel it coming. We’re not getting all worked up overthinking stuff or trying too hard because we think we have to win one. I know if we just keep doing what we’ve been doing and getting better and better, it’ll happen soon enough.

“I know it’s not gonna come easy by no means either. It’s gonna be tough and we’re gonna have to work hard to get it. I just know that if we continue to work hard and put ourselves in the positions, I know it’ll happen here pretty soon. The guys that win at this level are definitely the best in the business. I just want to put my name amongst them.”

Along with his boosted confidence, Bagley hopes a recent chassis change will also help him reach the allusive next level in 2015. After fielding Rocket Chassis cars through the first four years of his Late Model career, Bagley made the decision late last season to switch to Black Diamond by Club 29, the new chassis brand launched early in 2014 by Lanigan and veteran crew chief and car builder Ronnie Stuckey.

Bagley entered a Black Diamond by Club 29 car in three events at the end of last season and is so far impressed with his new ride. But it’s his close relationship with Lanigan and Stuckey – along with his race team’s close proximity to Stuckey’s Shreveport, La., shop – that he believes will help him excel in his first full season in one of their cars.

“Our Rocket cars were great to us and we were more than happy with them,” Bagley said. “But you just look at a map and see the difference between Texas to West Virginia (where Rocket is located) and Texas to Louisiana. With the success they’ve had and the relationship I have with Darrell and Ronnie – we get along very well – just all the reasons were pointing for us to go this direction. It was one of those deals where nothing was wrong with where we were at, it just seemed like it would be a better fit.

“I feel like this might speed the learning process up a little bit being as close as we are with Darrell and Ronnie,” Bagley said. “The success that Darrell has had is really unbelievable. Hopefully he’ll help me out a little bit and get our learning curve sped up a bit and get us to a point where we’re competing to win races every weekend.”

While Bagley is confident that he has the experience, the equipment and the support to become a consistent contender for WoO LMS victories soon, he knows that reaching that point won’t come easily.

“We’ve still gotta keep diggin’ and get better if we want to beat these guys,” Bagley said. “There ain’t no time for rest. You can’t get confident and think you’ve got it figured out. You’ve gotta always try to get better and better because you know that your competition is.”

Bagley will join his fellow World of Outlaws Late Model Series regulars in opening the 2015 season with seven events in Georgia and Florida between Feb. 6 and Feb. 21. Screven Motor Speedway in Sylvania, Ga., kicks things off with two WoO LMS events during the Winter Freeze Feb. 6-7. Both events feature complete WoO LMS programs of time trials, heat races, last-chance races and $10,000-to-win A-Mains. More information about the Winter Freeze is available online at www.screvenmotorsports.com or by calling the track at 912-857-4884.