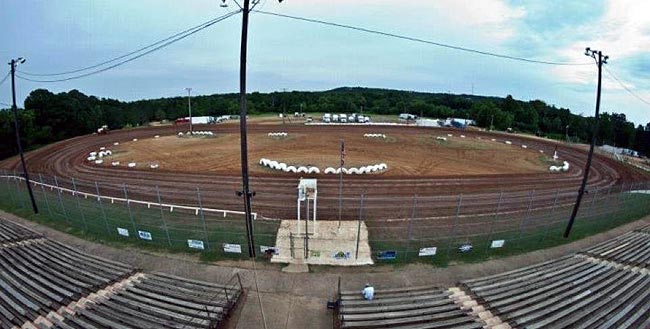 CONCORD, NC – May 8, 2013 – After nearly two extra months of buildup, the time has finally come for the inaugural World of Outlaws Late Model Series events at I-30 Speedway in Little Rock, Ark. (Fri., May 10) and Whynot Motorsports Park in Meridian, Miss. (Sat., May 11).

And make no mistake – the anticipation for this weekend’s pair of races, which were postponed by bad weather in late March, is running sky high.

“These are total must-see events,” DirtonDirt.com CEO and videographer Michael Rigsby bluntly stated in a ‘Fast Talk’ feature posted Monday on the noted dirt Late Model web site. “Two bullrings, two great racetracks and two places that the (World of Outlaws) Series has never been to. All of that adds up to that (Arkansas/Mississippi) area being treated to what will be really racy shows. Not overstating it, it’ll be wildly racy.”

What’s so special about I-30 Speedway and Whynot Motorsports Park, both of which will host 50-lap WoO LMS A-Mains paying $10,000 to win? Consider these scouting reports:

A World of Outlaws Battle On ‘Hammer Hill’

For years, I-30 Speedway has been known as ‘Hammer Hill’ to fans and racers. It’s a label that fits the place perfectly.

“I remember when that nickname started coming around, (I-30 promoter) Tracey Clay wasn’t real wild about it,” said Ben Shelton, a veteran motorsports announcer, publicist and DirtonDirt.com reporter from Memphis, Tenn., who has frequented I-30 for most of his 33 years. “But I told her, ‘Embrace it,’ and she has. I mean, that’s what the track is – a fast, quarter-mile, banked bullring, a real up-on-the-wheel kind of place.”

Indeed, there never seems to be a dull moment during races at the popular facility located in Arkansas’s capital city. Drivers who know the place well make it clear that this is no spread-’em-out, follow-the-leader oval.

“It kind of reminds me more of a (DIRTcar UMP) Summer Nationals-type racetrack you find up there in the Midwest,” said Jack Sullivan of Greenbrier, Ark., who started his racing career as an open-wheel Modified regular at I-30 and owns both Modified and dirt Late Model victories at the track. “It’s just a little, banked quarter-mile that you can really race on. If your car’s any good at all and you run hard, you can pass there.”

With a dirt Late Model triumph at I-30 coming as recently as last September (Comp Cams Super Dirt Series event) and one start there this season already under his belt (seventh-place finish in a CCSDS show on April 20), Sullivan has good reason to be looking forward to Friday’s WoO LMS invasion. The 37-year-old’s history of success at I-30 puts him on the short list of home-state racers viewed as favorites in the World of Outlaws event, joining Batesville residents Wendell Wallace and Billy Moyer.

Wallace, of course, stood in Victory Lane the last time a national dirt Late Model tour (the old Hav-A-Tampa/UDTRA Series) visited I-30, way back on Aug. 1, 1997. He’s also won five times in his last seven starts over the past five years at the track, which, since dropping the dirt Late Model division as a weekly attraction nearly two decades ago, hosts a handful of regional touring dirt Late Model series events each season.

“We’ve had pretty good success there over the years,” Wallace, 47, said of I-30 Speedway, which has come to be known as a hotbed for Sprint Car racing. “It’s just a little, tight bullring that can be pretty racy, and I guess it kind of fits the way my driving style is. Some people don’t like it because it is short and tight, but we’ve always been able to get around it pretty good and run good down there.”

Moyer, 55, has also won at I-30, but the bulk of his victories there came in the early to mid ’90s; when he captured a CCSDS event in March 2012, it marked his first appearance at the track in about a decade. Nevertheless, he’s very fond of the speedway and supportive of Clay’s decision to host a marquee race for the full-fender fraternity.

“I’m glad to see them having a big Late Model show again,” said Moyer, a former WoO LMS champion. “It’s a darn good racetrack so I’m sure it’ll be a good race. I think they’ll have a real big crowd and (the WoO LMS event) will turn into an every-year thing.”

Shelton has a similar feeling about the WoO LMS’s first trip to I-30.

“This is one of the races I’m most excited about this year,” said Shelton, whose voice will be heard on the I-30 public address system on Friday night. “I-30 is a track that’s just due to have something big for the Late Model division like a World of Outlaws show – and I think it’ll live up to the hype.

“The track will most likely have moisture on the bottom, a cushion on the top and be slick in the middle. It’s one of those places where you can run in there, drive straight through the slick and bounce off the cushion. It just makes for really good racing.”

Notable is the fact that virtually all of the WoO LMS travelers will get their first modern-day taste of the intense action at I-30. The lone circuit regular with recent experience at the track is 2013 Rookie of the Year contender Morgan Bagley of Longview, Texas, who has one runner-up and three third-place finishes in five SUPR series starts there over the 2011-12 seasons. The only other Outlaws to ever compete at the speedway are Clint Smith of Senoia, Ga., and Bub McCool of Vicksburg, Miss., both of whom were entrants in Hav-A-Tampa/UDTRA events at the track in the ’90s.

Big Show For A Reborn Racetrack

When Rodney Wing and his family purchased Whynot Motorsports Park in January 2006, the facility had been closed since 1998 and barely resembled a racetrack anymore.

“It had sat vacant for seven years so it was all grown up,” said Wing, a dirt Late Model racer from Meridian, Miss., who began his racing career in 1996 at Whynot. “I’m talking pine trees growing up through the bleachers, all that stuff.”

But thanks to plenty of assistance from friends and local racing supporters, Wing quickly cleaned up and rebuilt the facility. It reopened in May 2006 and since then has steadily grown to become known as arguably the nicest, raciest track in the state of Mississippi – a progression that will reach its zenith with the running of Saturday night’s WoO LMS event, the biggest national-tour show in the track’s long history.

“It’s really a feel-good story,” Wing said of Whynot’s return to prominence. “Everybody around here was really anxious to get Whynot back, so when people heard – by word-of-mouth over the span of about a week – that we were going to have a little ‘work day’ to start cleaning the place up after we bought it, they came out in droves to help. During that first work day we had, somebody looked up about lunch time and counted 70 people and 14 chainsaws running at one time. There were people using their personal equipment and vehicles to haul off trash and debris to help get the track back going.

“We had a lot of volunteers help in a lot of different ways, from the grounds to the buildings, and before we knew it the place was back together and ready to go. When we got it back open, it was like everybody got to come home.”

Wing, 33, feels fortunate to be the figure at the helm of a successful speedway that means so much to the local community. He’s also quite honored to be the promoter of a World of Outlaws event that will expose Whynot to an even wider audience.

“It’s definitely a kind of living-the-dream type of deal to own the racetrack and live right there on the 50 acres of land,” said Wing, whose family also operates a furniture store in Meridian that opened last October. “We’re proud about what we’ve done with Whynot over the past eight years, and we’re real excited about having a World of Outlaws race for the first time. The track’s been here since 1965 and it’s never had a race of this caliber before, so bringing the World of Outlaws in here is something I hope will really get everybody’s blood pumping and fired up to come to Whynot.”

The competitive racing that Whynot’s three-eighths-mile layout is known to produce will provide plenty of thrills for Saturday night’s attendees as well. Wing isn’t exaggerating when he describes Whynot’s racing as “phenomenal.”

“We’re fortunate enough to have some great dirt,” Wing said of Whynot’s surface. “Whether it’s tacky, slick or somewhere in between, it usually produces real good, multiple-groove racing.

“It’s really a round oval where you’re turning all the time, and it’s got progressive banking. It really produces some great because there’s infinite different lines you can run around the racetrack to make speed. You can work the banking and the cushion and the moisture ring around the inside. It’s got a lot of options, so it’s the kind of place that a driver that’s versatile and has a lot of tools in their toolbox will love.

“I’ve been to a lot of racetracks,” added Wing, “and I’m not being biased when I say that (Whynot) produces some of the best racing I’ve ever seen, anywhere. I don’t look at Whynot as being second to anyone.”

The group of World of Outlaws regulars headed to I-30 and Whynot this weekend will be headed by Josh Richards of Shinnston, W.Va., who enters the doubleheader leading the points standings. Shane Clanton of Zebulon, Ga., trails Richards by just 12 points, with defending champion Darrell Lanigan of Union, Ky., Rick Eckert of York, Pa., and Tim McCreadie of Watertown, N.Y., rounding out the top five in the standings.

General admission to the program, which also includes racing for IMCA Modifieds and Street Stocks, is $25 with children ages 6-12 admitted for $5 when accompanied by an adult.

I-30 Speedway is located in the Arkansas capital city of Little Rock, on Alexander Rd. just off Exit 126 of Interstate 30.

General admission to Saturday’s program, which also includes racing for the NeSmith Crate Late Models, open-wheel Modifieds, Street Stocks and Pure Stocks, is $30 for adults, $15 for children ages 6-12 and free for kids 5-and-under. Pit passes will be $40.

More information is available by logging on to www.whynotmotorsportspark.com or calling 601-527-0084.