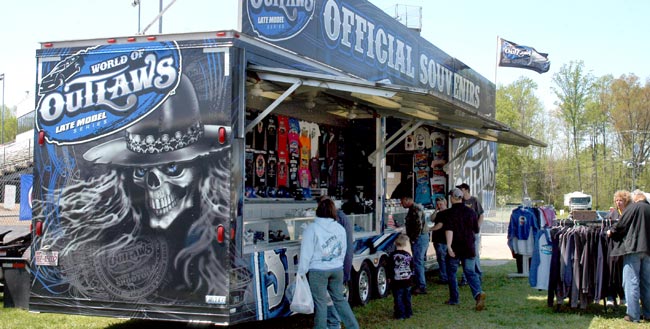 CONCORD, NC – April 21, 2011 – Arizona Sport Shirts has made an unprecedented commitment to the World of Outlaws Late Model Series, inking a three-year deal to serve as the national tour’s official merchandise provider.

“I’m super excited about extending our relationship with the World of Outlaws Late Model Series,” said Gerald Newton, Executive Vice President of Operations for Arizona Sport Shirts. “This is the first time we’ve worked out a multi-year agreement with the series so we’re obviously looking forward to the opportunities that this will open up for us. We’re going to be able to service World of Outlaws fans across the country better than we ever have before.”

Arizona Sport Shirts began producing apparel and other items for the WoO LMS midway through the 2005 season, but its product line and presence at tour events will reach new heights in 2011 and beyond.

“We’re going to bring fans the broadest range and selection of merchandise they’ve ever seen for the World of Outlaws Late Model Series,” said Newton, who will continue traveling to most tour events to manage the Arizona Sport Shirts trailer. “Fans will see more and more new apparel and interesting souvenirs as the year goes on.”

The centerpiece of the Arizona Sport Shirts effort at WoO LMS events will be the new Merchandise Center, a sharp trailer completely wrapped in a black, white and blue WoO LMS design. It features hydraulic windows, increased display space, a computerized touch-screen inventory and payment system and a 36-inch flat-screen television that will entertain fans with racing videos, satellite TV broadcasts and music.

Newton said that 79 different shirt styles were on display in the Merchandise Center during last weekend’s Commonwealth 100 activities – and more exciting, vibrant versions are in the works. In addition to the apparel, Newton indicated that over the upcoming months Arizona Sport Shirts will also be rolling out an array of unique WoO LMS-logoed items such as ladies’ earrings, bracelets and necklaces, wooden parking signs, coffee mugs, bottle openers, license plates, dog tags, car flags and large flags.

The WoO LMS Merchandise Center will be accented at all tour events by the GottaRace.com apparel trailer, providing fans even more souvenir options. The trailer features an assortment of items from the GottaRace.com line – which is owned by Arizona Sport Shirts – plus Arizona Sport Shirts-produced apparel for WoO LMS drivers Rick Eckert, Darrell Lanigan, Clint Smith, Jill George and Brent Robinson as well as manufacturers Rocket Chassis, Integra Shocks and VP Racing Fuels.

“We’re thrilled to see the commitment that Arizona Sport Shirts is making to the World of Outlaws Late Model Series,” said tour director Tim Christman. “Gerald Newton and everyone at Arizona have been great partners to us for many years and we’re honored to be working with them well into the future.”

Arizona Sport Shirts’ WoO LMS Merchandise Center will make its next appearances when the tour returns to action on April 29 at Hartford (Mich.) Motor Speedway and April 30 at Bluegrass Speedway in Bardstown, Ky. Both tracks with host 50-lap A-Mains paying $10,000 to win.

More info on Arizona Sport Shirts – including on-line ordering details – is available by logging on to www.arizonasportshirts.com.