All Systems Go For Jackpot 100 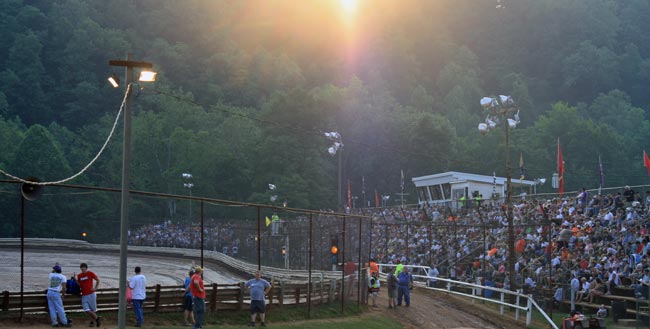 MIDDLEBOURNE, WV – May 10, 2013 – Thanks to John Watson and the Hometown Racing Association, the huge World of Outlaws Late Model Series ‘Jackpot 100’ doubleheader on May 25-26 at Tyler County Speedway is steaming full speed ahead.

Any uncertainty about the status of the national tour’s Memorial Day weekend visit to the quarter-mile oval in the hills of West Virginia following last week’s cancelation of the ‘Bullring Bonanza’ mega-raffle by the Tyler County Fireman’s Association due to lack of ticket sales was erased by a quick response from Watson and Co.

“The Jackpot 100 is our big Memorial Day weekend event,” said Watson, who heads the Hometown Racing Association group that was formed to operate Tyler County Speedway this season. “We want to have this weekend feature World of Outlaws racing for a long time to come, so canceling this whole race because the Fireman’s Association’s plans for the ‘Bonanza’ raffle did not work out would not have been good for the future.

“Our goal is to make sure this World of Outlaws Late Model Series event at Tyler County Speedway continues to build in the coming years, so, after sitting down with everyone on the Hometown Racing Association, we decided to step up and take over the promotion and running of the racing and concert portions of the weekend.”

Even with the cancelation of the ‘Bonanza’ mega-raffle, there is still a spectacular lineup of entertainment that the Hometown Racing Association will administer over the Memorial Day weekend. In addition to the $100,000-plus WoO LMS doubleheader – a 30-lap, $6,000-to-win A-Main on Sat., May 25, and a 70-lap finale paying $15,000 to win on Sun., May 26 – the group will also oversee a preliminary night of racing on Thurs., May 23, that includes support-division qualifying and the much-anticipated country concert on Fri., May 24, featuring Colt Ford, Justin Moore and Zack Paxson.

Admission to all four nights of the Tyler County holiday spectacular is included in a single super ticket being sold for $80. The tickets, which also include pit admission, can be purchased in advance by calling the ticket hotline at 304-771-5661 or 304-771-4883. Single-day tickets for admission to the races and concert are also being sold.

Fans who purchased $100 ‘Bullring Bonanza’ raffle tickets can use them as all-access pass tickets to the three nights of racing and the country concert (they will also receive a $20 refund), or they will be refunded their entire $100 purchase price if they can’t attend the weekend’s events.

“Where else can you go for $80 and get the caliber of entertainment that we’ll have at Tyler County Speedway on Memorial Day weekend?” concluded Watson.

Watson and the Hometown Racing Association are working hard within a short time frame to present the weekend, which also includes the $7,555-to-win ‘Let It Ride 55’ for the Renegades of Dirt Modifieds Tour and a $2,000-to-win Fastrak Crate Late Model event. Both the Dirt Modified and Crate Late Model races will be contested in conjunction with the WoO LMS doubleheader on May 25-26.

“We’re thrilled to have two nights of World of Outlaws racing as well as the Renegade Dirt Modified show and the Fastrak race,” said Watson. “It means a lot to us, the fans and everyone in Tyler County to have a huge national-level racing event like this

“We know that a lot of people have vacation plans to come to Tyler County Speedway over the Memorial Day weekend,” he continued. “We didn’t want to ruin people’s plans by canceling the weekend and have them get a bad outlook on Tyler County Speedway because of it. We realized that, for the good of the fans, the racers, the track and all the businesses in the county that benefit from the race, we had to push on with the event and that’s exactly what we’re doing.”