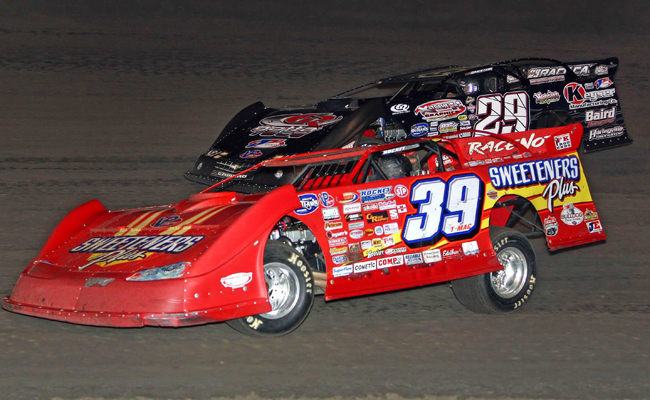 Only a few days removed from a $25,000 victory at Fairbury (Ill.) American Legion Speedway, McCreadie will attempt to complete a fairytale week with an even bigger payday at Cedar Lake’s crown jewel event. The 40-year-old Watertown, N.Y., racer enters the $50,000-to-win World of Outlaws Late Model Series race among the favorites after claiming the richest victory of his career in last year’s USA Nationals.

“To win two big races in two weekends like that, that’s the kind of stuff I’ve only dreamed of,” said McCreadie, who will begin the defense of his 2013 USA Nationals victory with Thursday’s $6,000-to-win tune-up event for the WoO LMS. “I’ve won a few big races, but it’s rare that you go on a hot streak and win multiple big ones.

“I don’t do this for the money, but if we could be fortunate enough to get another big win, I don’t know what we’d do. It would definitely be a dream come true for our team and for me and my family.”

McCreadie’s victory at last year’s USA Nationals was a long-awaited breakthrough for a driver who has typically ran well at the high-speed 3/8-mile oval. A former big-block modified racer and the 2006 WoO LMS champion, McCreadie’s all-out driving style has often put his Sweeteners Plus-sponsored entry in contention at the USA Nationals. But mechanical issues and other bad-luck circumstances had previously prevented him from winning at one of his favorite tracks.

“I always like going to Cedar Lake. It’s one of my top tracks and we’ve been competitive there a lot,” said McCreadie, who has finished among the top five four times since making his first USA Nationals start in 2005. “Maybe two times out of the 10 or so that I’ve been there we’ve been kinda off, but we’ve usually got a good program there.

“It’s an awesome racetrack. Last year it was perfect and when it’s like that it’s the type of racetrack that I love to be on. Hopefully it’s more of the same this time around.”

Besides matching up well with Cedar Lake’s racy surface, McCreadie also believes that the USA Nationals is one of the few longer-distance races that fit his driving style. While McCreadie occasionally struggles in longer races that require drivers to conserve their equipment and their tires until the end of the race, he believes his approach is perfectly suited for Cedar Lake’s 100-lapper.

“The one good thing about that track for me, is you don’t have to always be smooth and just drive straight and keep edges on the tires. I know I’m not the best guy at doing that,” McCreadie said. “There you can be aggressive and you can run hard for 100 laps.

“In my mind, that place is like a 50-lap race that’s actually a 100. A lot of these 100-lappers, you’ve gotta be smooth and not upset the car so you’ll be good for the last 20 laps. Cedar Lake’s not like that. I know some guys will say different, but I’ve been there enough and been up front enough to know that we can win whether I run the car wide open from lap one or whether I take it easy. That’s the beauty of that race.”

While McCreadie hopes this year’s trip to Cedar Lake will produce the same result as last season’s visit, he’ll have overcome some major differences for that to happen, with the biggest being a different chassis from the car he won in a year ago.

After a two-year stint in a Warrior Race Car, McCreadie switched back to Rocket Chassis following the 2013 season and is making his first trip to Cedar Lake in his own Rocket since 2011.

Along with making a guest appearance in Rochester, Minn., driver Jordan Yaggy’s Rocket at Cedar Lake’s DIRTcar Summer Nationals event in June, McCreadie has plenty of experience driving a Rocket at Cedar Lake from the many years he spent driving Rockets prior to 2012. But he expects that there will be at least some adjustment needed to reacquaint himself with how the chassis handles at the high-speed track.

He’s faced that all season as he’s adjusted back to a Rocket. While he’s been one of the top performers on the WoO LMS for most of the year, McCreadie has had his share of up-and-down results. He’s also struggled to find his way to victory lane with just one WoO LMS victory this season prior to winning at Fairbury.

But his performance became more consistent in the summer months with McCreadie finishing among the top four in four of the five events leading up to his PDC triumph.

For his recent improvement, McCreadie credits some creative thinking between his race team and the folks at Rocket Chassis.

“When you switch to a new chassis you follow their program because that’s what’s running good,” McCreadie said. “We’ve been on their program and we’ve been good. But I’ve just been missing a little bit all year. So we just sat down as a team and with (Rocket Chassis co-founder) Mark (Richards) and just went through some things and came up with some ideas. Some of the stuff I’ve tried before that’s maybe different from their stuff, we just decided to try it.

“The guys that succeed in this sport, I think, are the guys that don’t put blinders on and don’t say ‘well we gotta do this because it’s what worked in 1991 or it’s what worked last week.’ I don’t stand pat. I stood pat a lot longer this year because we’ve changed chassis brands and we’re relying a lot on Mark and everybody at Rocket. They’ve been great help, but we just needed to try some things a little different to try and get that little bit better.”

McCreadie believes he has found that little bit of improvement that he was looking for, and that has him excited about his chances this weekend at Cedar Lake.

“I think we’ll be up there fighting for it,” McCreadie said. “I feel like we’ve got a shot to win any place when we walk in the gate, but the way we’re running and the things we’ve been doing that’s working, I really feel like we’ve got the car where we need it to be.”

McCreadie may be a major proponent of trying new things when it comes to his race car’s setup, but he does his best to stay even keel in his mental approach to races. McCreadie treats even the biggest events like any other race in order to keep calm. But he admits that can be difficult at the USA Nationals, which always creates one of the most palpable big-race atmospheres of any of the sport’s largest events.

“You always try to ignore it like it’s not a big show just because you don’t wanna psych yourself out, but those nerves are definitely there,” McCreadie said. “It’s one of those things you can feel in the atmosphere all weekend. And when you pull on the track on Saturday and they do all the lights and do all that stuff for the driver intros, you know it’s a big show. But the good thing about racing, for me, is once we go green it’s just back to the grind.”

The USA Nationals weekend kicks off Thursday with a complete program for the WoO LMS featuring a $6,000-to-win main event and a full show of for open-wheel modifieds. The 27th annual USA Nationals gets under way Friday with WoO LMS preliminary action featuring time trials, heat races, and a top-eight dash. NASCAR Late Models will also be in action Friday with a complete program.

Live video of the racing action during the USA Nationals weekend will be available through a live online pay-per-view production on www.DirtonDirt.com.