A Tale of Two Racers: Joey and Jessica 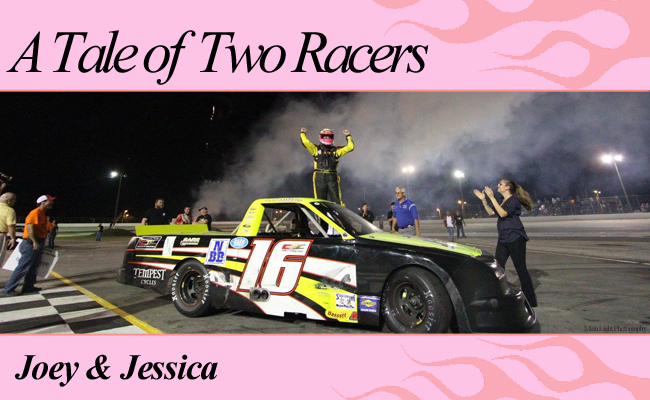 It was Joey Coulter’s smile that gave Jessica Green those high-school butterflies, much like the first time she grabbed ahold of the wheel. Their early affection for racing was undeniable. But while the two sixteen-year-olds raced at Auburndale Speedway in Winter Haven, Fla., they not only to found their hearts devoted to racing, but also found their hearts in each other. The love between them soon became stronger than the steel frames holding together their cars.

Joey was a shaggy-haired, wide-eyed kid at the time, racing pro late models at the track while Jessica competed in the beginner division. At first, Joey and his race buddies helped Jessica in exchange for her father’s mechanical wisdom. The duo raced almost every weekend at Auburndale, soon leading to lengthy phone conversations – strictly racing of course.

“Then one day I was testing our Hooter’s pro car in Lakeland, Fla., where she’s from…” explained Joey, recalling a moment that would change his life forever. “…and I said, ‘Hey, if you’re free tonight let’s go catch a movie.’ That kind of turned into our first date, and it basically just went from there.”

Joey, the wheelman of the No. 2 Rum Runner Racing/ Tempest Cycles Rocket machine for the World of Outlaws Craftsman® Late Model Series, is in a year of many firsts: He is making his World of Outlaws debut. He is in contention for Rookie of the Year honors. He will graduate with a college degree in December. And, best of all, he is counting down the days to becoming a new father with his biggest victory, Jessica.

Dinner at the local Applebee’s and a movie afterwards seemed harmless. Jessica’s parents should approve, even if it was a date.

“My parents were always, ‘no boyfriend…you can’t go out with your friends,’” said Jessica, who eventually told her mother it was with Joey. “She goes, ‘Oh, that’s fine!’ It was really odd, and our moms ended up calling right from the get-go that we were going to get married.”

Joey, who chose the movie “The Great Debaters”, still doesn’t know to this day whether or not Jessica liked the against-all-odds Denzel Washington flick. But she did, and ironically, she still doesn’t know if he liked it either. But one thing is for certain: a love blossomed in those theatre seats. At a track in the Florida Keys, Joey looked at her and said, “Well, I guess we’re dating.” Jessica happily agreed.

Their moms were right; Joey and Jessica got married on January 24, 2015 and are now expecting their first child on June 2. To boot, the couple opted to wait on learning the gender –  and planned a racing-themed reveal, of course.

At the very track where they met, Joey and Jessica race in an annual charity event with a truck that has been in the family for 10 years now. The truck is “bad to the bone” as Joey calls it, and it seems like anybody who is behind the wheel comes out with the win. This December race was special though. The night before the race, a helmet box was set at their feet – the color of the helmet finally revealing the baby’s gender.

“I guess that’s one more thing about that truck,” Joey said. “The original plan was to do it Saturday before the race, and I was like, ‘Let’s back it up to Friday because then that way we’ll get the initial shock out of the way. Then we’ll go to work Saturday.’”

The helmet was pink with “It’s a Girl” painted under the visor. Joey did not care what the gender was as long as it was with his soulmate. Jessica took just about every picture with that helmet on Friday night, until Joey strapped it on for Saturday’s race (he said he’s going to high-five the guy who painted it because it was not too girly).

The cherry on top of it all: Joey took the checkers that night. The helmet seemed to be a good luck charm in the victory and for things to come.

Deciding on a Degree

It only made sense for Joey, then a NASCAR series driver, to pursue a motorsports major in college. He grew up watching shows on the Discovery Channel like “Junkyard Wars” and “Monster Garage,” idolizing the teams who built these concoctions from daily drivers and scrap heaps. Maybe having that extra know-how would give his team an added edge on the tour.

“Motorsports…engineering…sounds great,” said Joey, making the connection. “I’m all for it. Got there, made a bunch of great friends, but realized I just wasn’t very good at it. The people who come out of that engineering school are good at what they do because that’s what they do. I had to put a lot of extra effort in, and it just wasn’t matching up.”

To his merit, the strenuous stock car schedule did not help; there just were not enough hours in the day to balance his racing schedule with his classes at the University of North Carolina at Charlotte. Joey found himself cutting his course load to go to the shop – an ironic opportunity cost.

But this cost had an eventual payoff. At the time, Joey was discouraged. But, it took wandering the business school to realize that he needed to rekindle his spirits with a new major that best complemented his strengths. Jessica, who was finishing her two degrees at the school, encouraged him to shift his focus.

“What stuck with me is, ‘Hey look, you have this opportunity to go to college. You’re going to leave here with something,’” said Joey, who transferred to the university’s supply chain management major. “If I start something, I’m going to finish it. I don’t leave anything on the table, and if I do, I’m not happy about it. I’m leaving here with a degree.”

Though Joey will not graduate with a degree from the university’s motorsports engineering program, he will take away something far greater. It took comparing himself to those “brilliant” engineers to actually succeed in supply chain management.

His roommate was quite the opposite of him, a confirmation of the saying “opposites attract.” Joey struggled as an engineer; his roommate succeeded. But, Joey used that to his advantage.

“I joked around with him and said, ‘When you look at something, in your mind it literally goes into an exploded view – all the parts and pieces, looking at it like a 3-D view,” Joey said. “He’ll miss stuff on the surface sometimes but the depth to understand what he’s working on just blows me away.”

Joey applied his roommate’s approach to supply chain management. In the motorsports program, Joey was usually the team leader because he focused on organizing the projects. To a necessary extreme, he now takes apart problems like his roommate does a car.

“Walmart is the greatest example,” said Joey, combining trades. “A lot of people think there’s just this big warehouse behind a Walmart and stuff magically pops up and goes on the shelf, but what it takes to get a pack of toilet paper from the manufacturer to the Walmart in Concord (N.C.) – just that one thing, there’s so many steps.”

With help from Jessica, Joey is on his way to graduating in December 2016.

Addressing the Outlaws 40-plus scheduled races, achieving a college degree and being on the brink of fatherhood, Joey laughed. He simply said, “I’m doing this all now so I can have a boring retirement.”

His life has revolved around competition – pushing himself so he can push others around him. That goes for his relationship with Jessica as well, and is the reason why they believe their marriage is so special and exciting.

The two times they have actually competed against each other – Jessica was racing the old family truck –they have split the victories. In 2013, Jessica won the first weekend, while the next weekend gets lost in translation on who was superior that night. Though Joey won the weekend, Jessica gave him a run for his money.

Jessica qualified better than Joey, but the pill draw gave Joey a better starting position for the feature. Even so, it only took half the race for Jessica to test her counterpart for the lead.

“I remember coming on the radio, and I was like, ‘Tell Joey I’m here. It’s time to go,’” Jessica said. “Every time I’d get underneath him the caution would come out. ‘Come on, this has got to be rigged.’ Then I got halfway up his door and was like, ‘Yes, I got him!’”

She thought she had him beat – until the truck lost power. Joey admitted had it not been for her truck’s electrical failure, he might have lost that one too. It was just bad luck (or good fortune depending on who is telling the story). Now it’s a matter of who is most qualified to teach their daughter how to drive – an ongoing argument that may never be settled.

“That again is what’s so great,” Joey said. “We’re both really competitive when it comes to the racing part. It’s funny; we can race against, together or with each other, whatever it is.”

This is a time when they are racing together – Joey’s the spotter for this particular race.  When the time comes to bring their daughter into the world, Joey suggested they have a wired-up helmet and a headset to coach each other through the birth.

“It’s almost the same kind of thing,” said Joey, comparing that moment to racing. “It’s a pretty intense moment from what I’ve heard. I think we’ll do what we always do: get on the same page, work together, and ‘crank’ this baby out. I say that all the time; she gets so mad.”

As his season picks up with the Outlaws, his whole ordeal may seem daunting. But this is where he applies his eventual-degree. He only plans two weeks ahead, a sweet spot that makes him ready for anything but not too far in advance where it’s overwhelming to think about.

Joey does have a bag packed for Moler Raceway Park and Tyler County Speedway weekend May 27-29, just in case. He is ready to hop a plane back to North Carolina at all costs – even if it means forfeiting the points that night. After the birth of their child, Jessica wants Joey and his team to go succeed in the series. She wants that for him.

If adrenaline ever gives a racer tunnel vision, it is an evil that most teams fear. Like supply chain management, drivers have to look at all their surroundings and set their sights clearly on the front of the field. But this time, it is all right for Joey to see only Jessica and their daughter, Charlie Claire.

“His smile to me says it all, and I can tell when he’s really excited because he has dimples,” said Jessica, who first thought he was just some “punk skater boy.” “We’re both racers, and we both have a strong passion for the sport. We wouldn’t have it any other way.”

Now they are the Coulter family, a family fueled on racing.