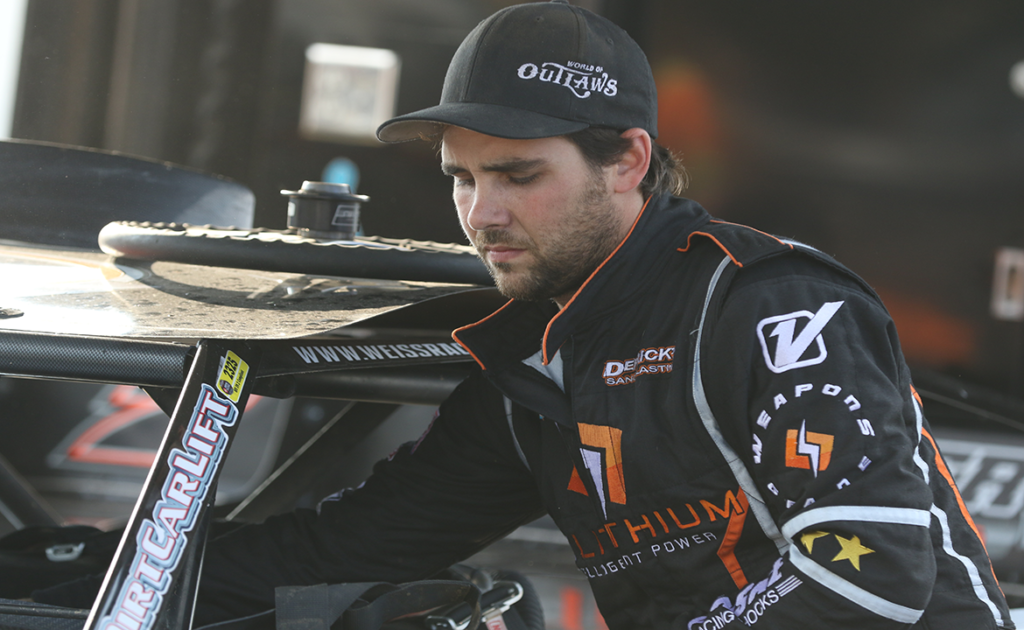 CONCORD, NC – Now that he’s had a few weeks to let it sink in, 2019 Rookie of the Year Ricky Weiss has done a bit of reflecting back on the remarkable first season he completed aboard the World of Outlaws Morton Buildings Late Model Series. At this point, the “rookie” denotation he wore throughout the 41 contested races might have been the most unfitting word to describe his first year on a national tour.

With 13 podium finishes, 17 top-fives, 30 top-10s and an average finish of 7.6, this was far more than just a “rookie” season. Weiss took the title to unprecedented heights this year while most of his competition just took notes.

“It felt pretty good hearing everyone’s speeches at the banquet, commenting on our team and how they don’t really consider us a rookie,” Weiss said. “That was definitely pretty humbling.”

“We kinda had our hearts set on [the Rookie of the Year title] when we rolled into Volusia, and that was a goal that was not going to be taken away from us no matter how hard we tried” said Shawn Gage, Weiss’ crew chief. “We just had to envision that was going to be the first goal we achieved.”

His large northern fanbase from years of racing around the upper Midwest and his home in Headingley, Manitoba, followed him throughout the year and grew exponentially from beginning to end. A solid runner-up finish in the tour’s annual stop at River Cities Speedway in North Dakota brought the local crowd flocking to the pit area after the race to see the former track regular and add to his ever-counting merchandise sales. There he stood, in a sea of black-and-orange t-shirts, signing autographs for a line of fans longer than the one he waited in to get his pit pass earlier that day.

Even those that didn’t follow him in his pre-Outlaw days were quite familiar with the nickname Manitoba Missile by season’s end after watching each race live on DIRTVision. It’s the fans, he said, and their constant support both at the track and online, that make he and the team’s daily grind more worthwhile.

“With social media nowadays, we’re trying to get our team more known and progressively better, and trying to help get our sponsors seen,” Weiss said. “It’s a pretty proud moment to say that we sold the most t-shirts and have fans stick up for you on the Internet. When something happens on the track, I try not to get into it too much, but when you scroll through the comments and see 90% in my favor, it makes us proud to know that we’ve got the backing of the fans.”

That constant support helped carry Weiss and the team through the toughest of times this year, more specifically his two DNFs late in the season that sent him back from second in points to fifth — a hole which he climbed out of by the Can-Am World Finals conclusion to finish third and become the highest-finishing rookie in Series history.

Even in what might have been Weiss’ darkest hour, his fans stuck with him. While leading with only six laps remaining in Lernerville Speedway’s Firecracker 100 in late June, Weiss cut a right-rear tire, dashing his chances for $30,000 and the first World of Outlaws win of his career.

“I wish one of my highlights could have been the Firecracker, that was close,” Weiss said. “Not to say we won’t get that again. But we know we can unload there and be quick.”

He stood beside his car after the race, completely dejected, with the glummest face anyone had seen him wear all season. But the car got loaded up, the tire got changed, and the team showed up the following week for the next race in Terre Haute, IN. Back to work he went, just as the veterans of the sport do.

Weiss was ultimately unable to get that elusive first Outlaw victory by season’s end, despite posting the second-most podium finishes. He had the equipment, he had the knowledge and determination, he certainly had the skill and the experience. But there was just one touch of something else missing that he said would have made a difference in getting to Outlaw Victory Lane, even just once.

“With a great racer comes great luck. If you’re not lucky, you’re not going to be a good racer. That all plays a factor,” Weiss said.

It may not have been in the cards on 41 particular nights for the 31-year-old Canadian, but that doesn’t mean the racing gods didn’t look his way at all in 2019.

Two victories to kick the year off all the way back in January at Arizona Speedway’s Wild West Shootout, two regional series victories at Tennessee’s Smoky Mountain Speedway and even a trophy at Knoxville Speedway played a nice supporting cast to the two brightest stars of his season — a win for Team Outlaws in Eldora Speedway’s Dirt Late Model Dream Thursday night preliminary Feature and another the Sunday before the 49th annual World 100 in the Baltes Classic.

“People strive their whole career to try and win at Eldora Speedway. Even if it’s the Sunday before at the Baltes Classic, to win that it’s pretty special. But to win during one of the preliminary nights of the big one and be in contention in the top three or top five, or even to lead laps in the big races, it’s pretty humbling for our team. Just to know we’re in the hunt with the best of the best in the world,” Weiss said.

It’s often been said that nobody knows their way around Eldora better than the 12-time crown jewel winner at the facility, Scott Bloomquist. Throughout 2019, Weiss had as much help from the Hall-of-Famer as he’s ever had, especially at the one place he knows the best. That, and his new Sweet-Bloomquist chassis seemed to make quite the difference, both in his Eldora runs and throughout the year on the Outlaws tour.

The 2004 World of Outlaws champion has been much more than just a racing resource and a host shop to Weiss this year. Bloomquist became a personal friend and mentor for life around the racetrack, and Weiss turned that knowledge into some of the best results he’s had in his career.

“We’ve been here pretty much 80% of the season, and we’ve gained a true friend,” Weiss said. “He respects me as a racer, I respect him as a racer. Even when we’re not talking racing, we’re sitting on the couch, having a drink or hanging out and just talking about life.

“Any time Scott touches something, it’s for the better. We see that, and our eyes and ears are always open to making things better, just as he did in his career. We’re just trying to take that legacy and put it into our team, and it definitely showed throughout the season.”

Another slice of #7’s success this season goes to a man who’s been around the Bloomquist shop for quite some time as well – Weiss Racing crew chief Shawn Gage. He’s been around Southeast Dirt Late Model racing for several years, having previously crewed for Team Zero and built engines for fellow Tennessean Vic Hill. This driver-chief combination displays some of the most dedicated work ethics on the circuit, and since their pairing just a few seasons ago, Gage still marvels at the effort Weiss puts into his operation.

“The determination, the work ethic… this isn’t his second job, this isn’t what he does for fun, this is his life,” Gage said. “Basically, you’re looking at the next Scott Bloomquist on work ethic. The knowledge that he retains and puts into his program, I saw that right away with him, he never ceases to amaze me on making stuff better and better.

“To make a long story short, he’s got the talent behind the wheel, in the shop, on the phone… I really don’t know that there’s a higher-caliber 31-year-old out there or will be out there for some time.”

Until that time has come where another rookie team comes along and proves themselves more worthy of a third-place finish in their first year aboard a national tour, Weiss and the Sweet-Bloomquist gang stand atop the rookie ranks of the Dirt Late Model world. 2019 was great, but in 2020, the gloves are off. Weiss will get more shots at reaching World of Outlaws Victory Lane.

“Right now, I’d say we’re one of the most prepared teams for 2020 and one of the teams most looking forward to it,” Weiss said.

2020 kicks off with the inaugural Battle at the Border at Vado Speedway Park, Jan. 2-5. Get your tickets to see The Most Powerful Late Models on the Planet invade New Mexico today!