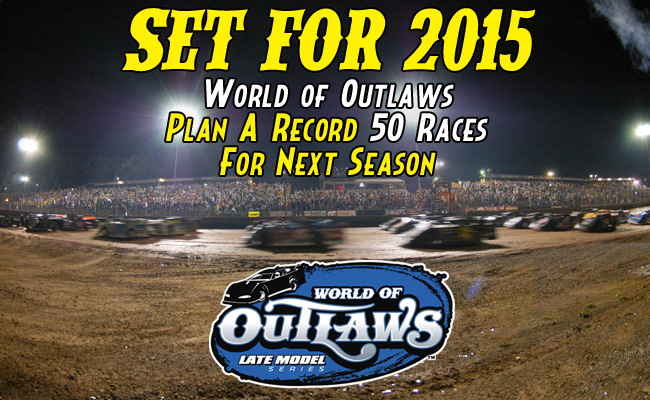 INDIANAPOLIS, Ind. – Dec., 11, 2014 – The World of Outlaws Late Model Series is set for a record number events in 2015 with 50 A-Mains featured on the national tour’s schedule released Thursday during the Performance Racing Industry trade show in Indianapolis. The country’s longest-running national Dirt Late Model series has visits to 38 tracks in 20 states and Canada planned for its 12th season under the World Racing Group banner.

The tour’s 2015 itinerary follows tradition in kicking off with a stretch of seven events in Georgia and Florida during the month of February. The Winter Freeze at Screven Motor Speedway in Sylvania, Ga., Feb. 6-7 will serve as the 2015 lid-lifter with a doubleheader weekend featuring 50-lap A-Mains paying $10,000 to win on both Friday and Saturday.

Also part of the busy first month of WoO LMS action is the fourth annual Bubba Army Late Model Winter Nationals at Bubba Raceway Park in Ocala, Fla. The three-night extravaganza kicks off with a $5,000-to-win DIRTcar Late Model event on Feb. 13 ahead of two $10,000-to-win WoO LMS programs Feb. 14-15. The early-season stretch wraps up with the traditional visit to Volusia Speedway Park in Barberville, Fla., for the DIRTcar Nationals that in 2015 will include three complete WoO LMS programs Feb. 19-21 after three DIRTcar Late Model programs Feb. 16-18.

The 2015 season will conclude for the ninth straight year with a pair of $12,000-to-win 50-lap A-Mains during the Bad Boy Buggies World of Outlaws World Finals on Nov. 5-7 at The Dirt Track at Charlotte in Concord, N.C.

Boasting three tracks that will host their first-ever WoO LMS events and nine tracks that are returning to the schedule after various hiatuses, the 50-race campaign is on course to surpass the tour’s alltime single-season high of 46 A-Mains established in 2013 and equal the record of 38 different host tracks set in 2010.

“I am excited about our schedule and that we have been able to increase the number of races without adding much more travel for our teams,” said WoO LMS series director Tim Christman. “A schedule of roughly 50 races has always been our goal number and we should end up right around that by the time Charlotte rolls around.

“We are thrilled that so many track promoters and managers have chosen to include the World of Outlaws Late Model Series in their 2015 plans. It’s with their support that we’re able to bring the most prestigious series in all of Dirt Late Model racing to fans across the country.”

The three tracks set to host the WoO LMS for the first time are Friendship Motor Speedway in Elkin, N.C., a 4/10-mile oval that kicks off a May 1-2 Tar Heel State doubleheader that it shares with Fayetteville Motor Speedway; the 3/8-mile Ponderosa Speedway in Junction City, Ky., which hosts the series on May 8 ahead of a visit to Smoky Mountain Speedway in Maryville, Tenn.; and Quincy (Ill.) Raceways, which serves as a lead-in to Fairbury’s Prairie Dirt Classic weekend with its event on Thurs., July 23.

Lernerville’s Firecracker 100, meanwhile, will again feature three full nights of competition with a fan-friendly format that boasts 30-lap, $6,000-to-win preliminary A-Mains on Thurs., June 25, and Fri., June 26, before ending with the 100-lap headliner offering a $30,000 first-place prize on Sat., June 27.

Fairbury American Legion Speedway will once again welcome the WoO LMS for its popular Prairie Dirt Classic event on July 24-25. In the event’s third straight year of WoO LMS sanctioning, the race payout will again see an increase with the winner’s pay bumped to $26,000 for the 26th running of the event.

Special events are also set for the quarter-mile Tyler County Speedway in Middlebourne, W.Va., for the Jackpot Weekend on May 23-24, Farmer City (Ill.) Speedway for the Illini 100 weekend March 27-28, and Berlin Raceway in Marne, Mich., a 7/16th-mile asphalt track that will be covered with dirt for the Keyser Manufacturing Down & Dirty Weekend on Sept. 18-19. Race formats and purse structures for all three events will be announced in the near future.

A pair of lucrative regional swings also bolster the 2015 schedule with both the Wild West Tour and the traditional Northeast swing featuring expanded slates. The Northeast swing features four events in New York and Canada between June 18-23. New York’s Fonda Speedway kicks things off on Thurs., June 18 ahead of a pair of events in Ontario, Canada at Brighton Speedway on Sat., June 20 and Cornwall Speedway on Sun., June 21. The tour then returns to New York for a Tues., June 23 date at in Weedsport Speedway, which welcomes the series for the first time since 2007. The four-race stretch leads into the Firecracker 100 weekend June 25-27 at Lernerville Speedway.

Three more tracks returning to the schedule in 2015 will make a late-summer three-race weekend. Atomic Speedway in Chillicothe, Ohio, will host its first WoO LMS event since 2009 on Aug. 21 ahead of another visit to the Empire State for an Aug. 22 event at Stateline Speedway in Busti, N.Y., and an Aug. 22 and Eriez Speedway in Erie, Pa.

Another three-day weekend is scheduled for Labor Day weekend with the WoO LMS making another visit to Lernerville Speedway on Sept. 4 followed by a doubleheader at Selinsgrove (Pa.) Speedway Sept. 5-6.

Three other doubleheader weekends highlight the 2015 WoO LMS tour. The series heads to Kentucky Lake Motor Speedway in Calvert City, Ky., for the first time since 2005 on March 20 ahead of a visit to I-30 Speedway in Little Rock, Ark., which welcomes the tour for the third consecutive year with its March 21 event. Another weekend calls for a visit to the Volunteer State for events at Duck River Raceway Park in Wheel, Tenn., on April 10 and Tazewell (Tenn.) Speedway on April 11. A trip to the Mid-Atlantic region will see the tour hit Potomac Speedway in Budds Creek, Md., on Aug. 14 and Winchester (Va.) Speedway on Aug. 15.

Standalone events fill out the remainder of the 2015 WoO LMS slate, with Delaware International Speedway in Delmar, Del., scheduled to host its 11th WoO LMS event on Thurs., May 28. Shawano (Wis.) Speedway will provide WoO LMS competitors a stop-off between Fairbury and Cedar Lake Speedway for the second straight year with its event on Tues., July 28.

For the most up-to-date schedule information on the WoO LMS, visit www.worldofoutlaws.com. Fans can also follow the WoO LMS on Twitter at Twitter.com/WoOLateModels and at the tour’s new Facebook page at www.Facebook.com/WorldofOutlawsLateModelSeries

(as of 12/11/14) Schedule subject to change. Check WorldofOutlaws.com for latest information.