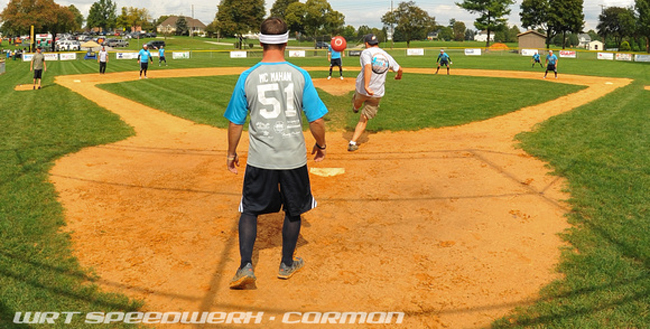 SARVER, PA – June 7, 2013 – An addition to the off-track entertainment lineup during the seventh annual Firecracker 100 Presented by GottaRace.com on June 27-29 at Lernerville Speedway will keep fans and a select group of drivers busy – and raise money for charity to boot.

The inaugural Firecracker 100 Kick-It Cup will be contested on Friday afternoon (June 28) of the huge World of Outlaws Late Model Series weekend, pitting two teams comprised of WoO LMS, regional and Lernerville driving stars against each other in a kick-ball game designed to raise awareness and money for programs and research devoted to childhood cancer.

In partnership with the Jeff Gordon Children’s Foundation, Kick-It is a grassroots fundraising movement dedicated to improve and accelerate advancements in pediatric cancer research by inspiring individuals across the country to play kickball. It was founded in 2009 by a 10-year-old battling cancer and has already raised over one million dollars, including tens of thousands donated by race fans across the country.

The Firecracker 100 Kick-It Cup will mark the first time the dirt Late Model fraternity has participated in the unique fund-raising effort. In recent years several World of Outlaws STP Sprint Car Series events have included kickball games that proved popular with fans and competitors alike, prompting an expansion to one of the season’s biggest shows for the full-fender set.

The Firecracker 100 by GottaRace.com is a three-day festival of speed and entertainment that includes 30-lap, $6,000-to-win preliminary WoO LMS A-Mains on Thurs., June 27, and Fri., June 28, leading into a 100-lap finale offering a $30,000 first-place prize on Sat., June 29. Three-day reserved-seat packages value-priced at $69 for adults and $19 for children 10-and-under – with a free fan pit pass for Thursday and Friday included if purchased by midnight ET on Wed., June 26 – and single-day tickets are on sale at www.lernerville.com and www.worldofoutlaws.com/tickets or by calling 724-353-1511.

“World of Outlaws STP Sprint Car Series fans and teams have really embraced the Kick-It concept and we believe the World of Outlaws Late Model Series followers will do the same,” said World Racing Group Production Coordinator Katie Boyer, who is overseeing the organization of the Firecracker 100 Kick-It Cup. “It’s a neat way for the fans and drivers to unwind and have some fun before hitting the track and support a great cause in the process.”

To raise money for the fight against childhood cancer, fans can donate money on behalf of their favorite participating driver by logging on to www.kick-it.org/events/firecracker-100-kick-it-cup, where each driver’s name can be found in the pulldowns under ‘Team 1’ and ‘Team 2.’ In addition, Firecracker 100 Kick-It Cup attendees will have an opportunity to win a variety of racing-related apparel and prizes by purchasing raffle tickets, with all proceeds going to Kick-It’s efforts to support children battling cancer and the search for a cure.

For more information about the Kick-It program for the Jeff Gordon Children’s Foundation, visit www.kick-it.org/jeffgordon.

The inaugural Kick-It Cup accents an already exciting schedule of non-racing fun during the Firecracker 100 weekend that includes fireworks; post-race concerts; a Saturday afternoon filled with driver/fan horseshoes and cornhole tournaments, on-stage driver interviews, the DirtonDirt.com Driver/Fan Trivia Contest, the Ms. Firecracker pagaent and a wienie roast; and a driver autograph session underneath the grandstands prior to Saturday night’s program.

Additional info on the Firecracker 100 by GottaRace.com can be obtained at www.lernerville.com or by calling 724-353-1511.