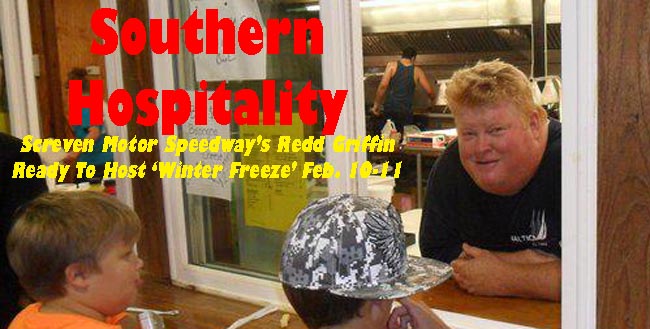 For Griffin, there just isn’t any time right now for introspection. He’s less than one month away from the richest event he’s ever presented at his Screven Motor Speedway: the ‘Winter Freeze’ on Feb. 10-11, a blockbuster weekend that he hopes will prove he’s a worthy recipient of the coveted promotional award.

A 60-lap World of Outlaws Late Model Series A-Main paying $20,000 to win headlines the Winter Freeze, which also features a pair of $5,000-to-win events for the UNOH All-Star Circuit of Champions Sprint Car Series. It’s a monster pairing of headline divisions that will kick off the season-opening Georgia/Florida speedweeks with a flourish.

“I’m really looking forward to this show,” said Griffin, whose three-eighths-mile oval played host to annual $10,000-to-win WoO LMS programs from 2008-10 (last year’s World of Outlaws race was rained out on its original date and then later canceled by the track). “This is the biggest thing we’ve ever done at Screven and the interest I’m seeing has been fantastic. If we can get some of that good weather I’m praying for, I think we’re gonna have a great turnout and an awesome show.”

The Winter Freeze promises to put a punctuation mark on Screven’s rise to relevance in the motorsports industry under Griffin, who 16 years ago began carving the complex out of a cotton field one hour northwest of Savannah. Griffin has constructed one of the most diverse racing facilities in the country, boasting not only a competitive red-clay oval but also the quarter-mile Savannah River Dragway, a mud bog, a nearly quarter-mile dirt go-kart track and a paved rental kart track.

Griffin, 43, has made additions to Screven’s infrastructure and beefed up the track schedules virtually every year since he came on the scene. It’s this dedication to providing fans and racers an ever-improving experience – not to mention Griffin’s down-home, regular-guy personality – that earned him recognition as one of six regional Promoter of the Year honorees by RPM, an idea newsletter and professional resource for racetrack operators.

“I’m really shocked to win it,” said Griffin, one of the nominees for the 36th National Auto Racing Promoter of the Year Award that will be announced on Feb. 20 during the 39th annual RPM Workshops in Daytona Beach, Fla. “It sure is an honor to be recognized like that by the other promoters. I guess you can say it puts the pressure on to live up to an award that’s that important.”

In that vein, Griffin is laser-focused on the Winter Freeze. A mild winter has given him and his staff plenty of opportunity to prep the property for the expected influx of spectators and teams. Most notably, he’s erected more bleachers on the front and back straightaways and has completely turned over Screven’s racing surface in hopes of continuing the side-by-side action that many observers rate as some of the best fans will see in the Southeast.

Griffin has planned a full weekend of activities for Winter Freeze attendees, starting with an open practice session running from 6-10 p.m. on Thurs., Feb. 9. The schedule of events on Fri., Feb. 10, includes WoO LMS time trials and heat races plus full programs for the All-Star Circuit of Champions Sprint Car Series and the Screven Late Model division ($1,500 to win), while the card on Sat., Feb. 11, features B-Mains and the lucrative Winter Freeze finale for the WoO LMS as well as another All-Star Sprint Car show and a $2,500-to-win crate Late Model headliner.

In addition, Griffin will keep things busy on Saturday afternoon with Gee Chee Creek Mudd Drags competition, racing at his Gamecock Speedway go-kart oval and challenge races between World of Outlaws drivers and fans on the rental kart track. The mud-bog and go-kart action is included in the $35 adult ticket price, which also provides an all-access pass to the pit area of each racing venue.

“We’re gonna give everybody plenty to see and do during the day,” said Griffin. “It’s a great deal for the fans. For $35 you get to see all kinds of different racing in one place, and you can go in the pits and rub elbows with (WoO LMS stars) like Rick Eckert and Josh Richards and all the 410 Sprint Car guys.”

Griffin will also have his famed concession stand cranking out a wide variety of foods all weekend. The large building, situated between the speedway and dragstrip, is well known for producing much more than the normal racetrack fare.

“When the folks come down here from all over, we’re gonna make sure we treat ’em right,” said Griffin, who plans to situate heaters under the grandstands to provide fans extra warmth if the temperatures dip at night. “We’re going to show them good southern hospitality and give ’em some good southern cooking.”

The Winter Freeze will begin the chase for the $100,000 WoO LMS points title, assuring a banner turnout of World of Outlaws hopefuls. Topping the field will be former series champions Rick Eckert of York, Pa., Darrell Lanigan of Union, Ky., and Tim McCreadie of Watertown, N.Y. – all of whom plan to pursue another crown in 2012 – as well as two-time titlist Josh Richards of Shinnston, W.Va., who has not yet announced his schedule for ’12 as he looks to land a fulltime NASCAR Camping World Truck Series ride.

The Winter Freeze roster will be accented by an array of other national, regional and local standouts.

Griffin said that he will add a Non-Qualifiers’ Race to the WoO LMS itinerary if more than 48 dirt Late Models are signed in for the event.

Screven Motor Speedway will provide free camping (no hookups) on the paved dragstrip on a first-come, first-served basis.

More information on the Winter Freeze is available by logging on to www.screvenmotorspeedway.com or calling 912-228-5886.

Screven Motor Speedway is located between Mile Markers 6 and 7 on GA Route 21 in Screven County, Ga.

A busy month of February for the WoO LMS will continue after the Winter Freeze. The tour will head farther south for the inaugural ‘Bubba Army Late Model Winter Nationals’ on Feb. 16-18 at Bubba Raceway Park in Ocala, Fla., and two dates (Feb. 23 and 25) during the UNOH DIRTcar Nationals Presented by Summit Racing Equipment at Volusia Speedway Park in Barberville, Fla.