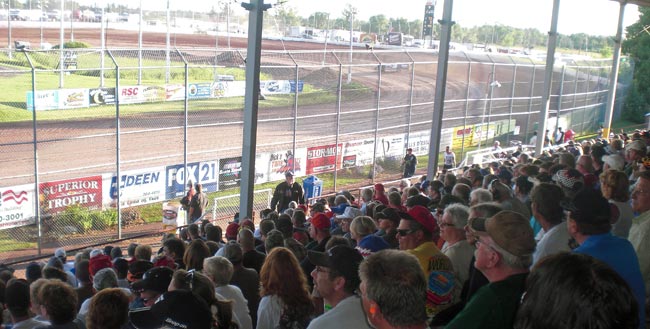 Confirmation of the date at the Badger State track completes the schedule of the national dirt Late Model circuit’s busy Wild West Tour, which over an eight-day span after the Fourth of July holiday will contest six races at tracks in five states and one Canadian province.

A three-eighths-mile oval that presents weekly Friday-night racing, Amsoil Speedway will host a 50-lap WoO LMS A-Main paying $10,000 to win. The event will mark the tour’s first visit to the track since 2010 when Jimmy Mars of Menomonie, Wis., emerged victorious.

“We’re excited to bring the World of Outlaws Late Model Series back to Amsoil Speedway,” said speedway promoter Joe Stariha. “We were looking forward to having the World of Outlaws come to town last year, but unfortunately the show was canceled because of rain. Hopefully we’ll have some good weather this year and the fans will see a great race.”

Amsoil Speedway’s gates are scheduled to open on July 5 at 4 p.m. Hot laps will begin at 6:30 p.m. and qualifying will get the green flag at 7 p.m.

More information on Amsoil Speedway is available by logging on to www.amsoilspeedway.com.

All events during the Wild West Tour will be co-sanctioned by DIRTcar UMP and use a Hoosier tire rule mandating only 20-, 30-, 40- and 55-compound rubber.