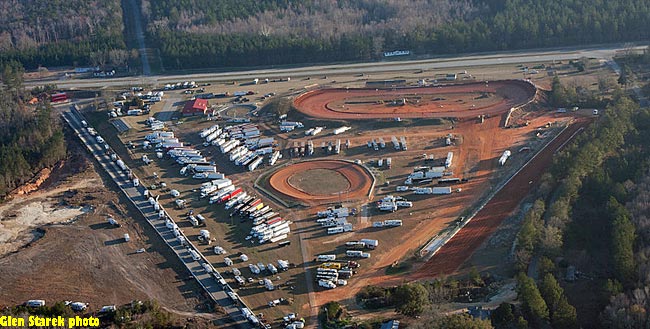 “I’m pretty much game for anything that works best for the racers and I think using the (DIRTcar UMP) Hoosier tires will help everyone,” said Screven owner Redd Griffin, who will host the WoO LMS lidlifter for the second consecutive year. “All the other World of Outlaws races after us (in Florida) are using the same tire rule, so it makes sense for us to simply things and go the same route. Now all the drivers who travel far to come down and race for a couple weeks won’t need to bring even more different tires.”

Griffin opted to change the look of the Winter Freeze in an effort to give racers more money-making opportunities and fans more bang for their buck.

“Drivers nowadays are looking for money to keep going, especially during the Speedweeks deal,” said Griffin. “Now, with two full shows, they’ll get paid both nights. If a guy has a bad night to start the weekend, they’ll have a chance to come back and make up for it the next night.

“And it’s going to be great for the fans because they’ll get to see even more racing. We’re doubling the excitement.”

Griffin’s February racing extravaganza will be chock full of action, with the National Late Model Series and Florida Mini-Sprints Association competing on both Friday and Saturday nights and a 410 Sprint Car program scheduled to light up the three-eighths-mile speedway on Thurs., Feb. 7. The WoO LMS, NLMS and Mini-Sprints can also participate in an open practice session on Thursday evening.

All Griffin needs for a blockbuster weekend is a bit more help from Mother Nature than he received during the 2012 Winter Freeze. Temperatures dropped and winds picked up on Saturday night of this year’s event, chilling the fans who watched Darrell Lanigan of Union, Ky., begin his march to the WoO LMS points title with a dominating victory in the big-money A-Main.

“The weather on Friday (for WoO LMS qualifying) was great, but when we woke up Saturday morning the wind just kicked up and temperatures fell,” said Griffin. “It definitely wasn’t what we’re used to in Georgia. You know it was cold when people from New York were telling you that it was freezing.

“Hopefully we can order up some warmer weather, but if we do get a forecast that calls for some cold conditions we’re looking at moving up the starting time of the program to try and get everything done a little earlier for the comfort of the fans.”

More details on the Winter Freeze will soon be available by visiting www.screvenmotorspeedway.com and calling 912-228-5886.

Screven Motor Speedway is located between Mile Markers 6 and 7 on GA Route 21 in Screven County, Ga., about 45 minutes Northwest of Savannah.