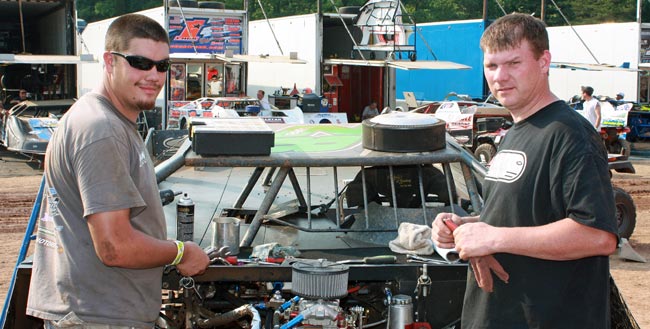 First State Native (at left in photo) Will Work As Crew Chief For John Lobb (pictured), Race His Own Car In World of Outlaws Late Model Series ‘Fulton Bank 50’

DELMAR, DE – May 29, 2012 – Ross Robinson will certainly be happy to visit his home track, Delaware International Speedway, on Thursday night (May 31) for the World of Outlaws Late Model Series ‘Fulton Bank 50.’ But mostly he’ll be busy.

The 22-year-old native of Georgetown, Del., is making a big return to the half-mile oval, not only serving in his regular capacity as chief mechanic for WoO LMS regular John Lobb of Frewsburg, N.Y., but also climbing behind the wheel of his family’s dirt Late Model to compete in the evening’s action.

“It’ll be nice to come home and see my family and a lot of friends,” said Robinson, who ran a dirt Late Model regularly at DIS from 2007-2010. “Being able to race with people I work with now will be pretty cool too.”

“We parked next to John (Lobb) at last year’s Outlaw show,” recalled Robinson, whose appearance at the 2011 WoO LMS event marked only his second start of the season because he had been waiting on the return of his team’s engine. “We got to talking, and at the end of the night John asked me if I’d be interested in coming to work for him.”

Robinson didn’t qualify for last year’s WoO LMS A-Main at DIS – ironically, he was involved in a B-Main tangle with Lobb – but he had found a new job. He decided to temporarily put his own driving aspirations on the backburner to head out on the World of Outlaws road with Lobb, a veteran competitor at tracks in the western Pennsylvania area who was chasing the WoO LMS Rookie of the Year honor with the fledgling Kennedy Motorsports team.

While Robinson was able to squeeze in only a half-dozen starts with his own dirt Late Model last season after signing on as Lobb’s crewman, he had no regrets about his decision to turn wrenches fulltime. He happily returned this season for another run at the WoO LMS with Kennedy Motorsports, which expanded to a two-driver effort with the addition of tour standout Shane Clanton of Fayetteville, Ga.

“I want to have a career in racing,” said Robinson, who has set up residence in an apartment at Lobb’s new shop in western New York. “My ultimate goal is that I’d love to be able to drive for a living, to be in a position like Shane or John. But that’s somewhere down the road. Right now I’m comfortable being a crew guy on the road. It’s giving me a chance to see a lot of things and learn so much.

“When you just live, eat and breathe racing, day-in and day-out, you get to learn so much and be exposed to so much more stuff. All of it has just opened my eyes to so many things about this sport, like how to do it for a living and things that can really make these race cars work.”

Rubbing shoulders at WoO LMS events with some of the country’s best full-fender drivers has provided Robinson an invaluable education.

“I thought I had a decent idea about everything when I left home last May to start this job with John,” said Robinson. “But then once we got into the grind – I’ll be the first to admit, I sometimes felt like a fish out of water. I was not up to speed with how a lot of things work out on the road. It took me pretty much the whole year to get caught up, and to this day I’m still learning the ins and outs of how to do this.

“It’s just a whole other world. I’ve been accustomed to weekend-warrior racing, and now to be involved with a fulltime deal like this is just something totally different.

“I know I’m not driving,” he continued, “but being able to be with these (WoO LMS) guys that we travel with, I feel like it’s only bettering myself. When you’re around them all the time you see that they’re all normal people who like to have a good time in life, and you really gain a respect for what these guys do. We’re all doing what we love, but you really have to pour your heart and soul into this and sacrifice a lot to make it work and be successful.”

Robinson feels that his own driving has improved from the lessons he’s learned on tour.

“Last year was the least I’ve raced in a year since I started in ’97 (driving Quarter-Midgets), but just being able to watch these guys day-in and day-out has really allowed me to pick up on stuff,” said Robinson. “When I’ve gotten back in the car, I feel like I’m more comfortable making adjustments to my own car and I feel a lot more comfortable with my own program.”

Robinson is hopeful that his increased mechanical knowledge will translate into a solid performance with his family’s Rocket machine on Thursday night. But he has no illusions about his prospects – and besides, his focus will remain on Lobb, who is struggling to shake off a run of bad luck on the WoO LMS that has him ranked 14th in the points standings.

“It’ll be busy with me still crew-chiefing for John, but he’s more than supportive of me racing because he knows it’s my home track,” said Robinson, who owns one career dirt Late Model feature win at DIS (in 2008) and has finished as high as second in the points standings (2009). “I’ll still have my dad, my grandfather and my friends Matt and Tyler there to work on my car, so that will allow me to just concentrate on John’s car. The only time I’ll have to touch my car is when I get in it.

“Hopefully everything can go well, we’ll have a good night and have some fun.”

Robinson would most like to see a strong outing for Lobb, who is in dire need of some positive results. Lobb, 42, showed signs improvement over Memorial Day weekend but he couldn’t avoid misfortune; he won a B-Main on Saturday night at Tyler County Speedway in Middlebourne, W.Va., but discovered terminal engine problems moments later, and on Sunday at I-77 Raceway Park in Ripley, W.Va., he timed 10th-fastest but then saw his hopes go down the drain when a flat tire knocked him out of heat-race contention and he ended up a non-qualifier.

“It seems like we take two steps forward and then three back,” Robinson said of his racing with Lobb. “But all the work has got to pay off at some time. Me and John and Shane and Buddy (Chapman, Clanton’s crewman), we’re all working as hard as we possibly can and (team owner John) Kennedy is standing behind us 110 percent. Hopefully luck will have to turn and point toward us at some point.”

Robinson, who has entered the WoO LMS event at DIS four times and started two A-Mains (finishing 21st in ’10 and 23rd in ’09), Lobb and Clanton will be part of a talent-laden field on Thursday night. Their competition will include WoO LMS points leader Darrell Lanigan of Union, Ky. – the only driver who has won Delaware’s World of Outlaws event twice – defending tour champion Rick Eckert of York, Pa. (last year’s race winner at DIS), Chub Frank of Bear Lake, Pa. (’07 WoO victor at DIS) and ’06 series champion Tim McCreadie of Watertown, N.Y.

Delaware International Speedway’s gates are scheduled to open at 4 p.m. on Thurs., May 12, with hot laps set to begin at 7 p.m. Time trials and heat-racing will follow.