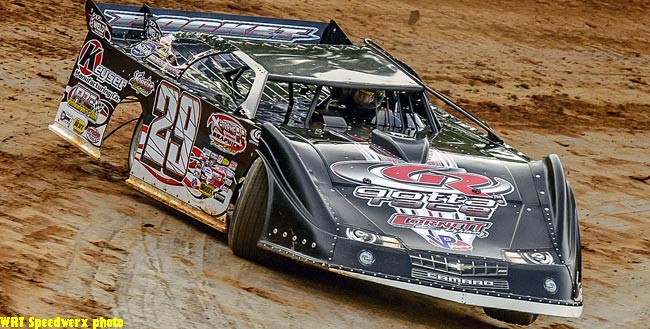 CONCORD, NC – Feb. 7, 2013 – Darrell Lanigan will be hard pressed to match the records he set during his 2012 World of Outlaws Late Model Series championship season, but one thing is certain: he’s the consensus favorite to win this year’s $100,000 title.

The 42-year-old star from Union, Ky., was voted the driver most likely to capture the national tour’s 2013 points crown in the sixth annual WoO LMS Pre-Season Media Poll. He topped the voting for the first time, snapping Josh Richards’s four-year streak as the press contingent’s number one pick.

Lanigan will begin his chase of a second straight and third career WoO LMS championship this weekend (Feb. 8-9) during the ‘Winter Freeze’ doubleheader at Screven Motor Speedway in Sylvania, Ga. The circuit’s season-opening swing also includes a pair of tripleheaders: the Bubba Army Late Model Winter Nationals on Feb. 15-17 at Bubba Raceway Park in Ocala, Fla., and the 42nd DIRTcar Nationals Presented by Summit Racing Equipment on Feb. 21-23 at Volusia Speedway Park in Barberville, Fla.

Nearly four dozen writers, photographers and broadcasters who cover the WoO LMS participated in the poll, which asked the press members to predict the top-five finishers in the tour’s 2013 points standings. Points were distributed to each driver named on the ballots using a 5-4-3-2-1 system.

Lanigan dominated the voting, rolling up 195 points to easily outdistance Richards’s 127-point total. Lanigan earned a poll-best 27 first-place votes and he was the only driver whose name appeared on all 44 ballots, with 42 of those selections listing him for a top-three finish in the points standings.

A WoO LMS regular every season since the tour was reincarnated in 2004 under the World Racing Group banner, Lanigan returns to the trail with his championship combination completely intact. He will campaign Cornett-powered Rocket Chassis machines wrenched for a second straight year by crew chief Jason Jameson and mechanic Adam Logan.

Richards, 24, of Shinnston, W.Va., finished a distant second in the Media Poll, but that significant gap was largely the product of the uncertainty still shrouding his WoO LMS championship candidacy. While he’s announced that he is returning as a regular after leaving the tour early last season to move south and pursue a career on the NASCAR Nationwide Series, he said he would depart again if a quality NASCAR ride presented itself.

With several poll respondents alluding to the possibility that Richards might be pulled from the WoO LMS by a NASCAR opportunity, the two-time series champion was left off 13 of the 44 ballots. But his support was still extensive enough – nine first-place, 15 second-place and six third-place votes – that he emerged as the runner-up in the voting.

Shane Clanton, 38, of Fayetteville, Ga., was the only other driver to crack the 100-point plateau, finishing third with 108 points. A popular choice to contend for the title in his second year with Kennedy Motorsports, he appeared on 40 ballots, receiving three first-place, five second-place and 13 third-place votes.

Tim McCreadie, 38, of Watertown, N.Y., completed the top five in the poll with 81 points. The 2006 WoO LMS titlist appeared on 33 ballots, picking up a single first-place and six second-place votes.

The expected resurgence of Watertown, N.Y.’s Tim Fuller, who appears reborn as he heads into his first full season driving for the high-profile Kennedy Motorsports team, was evidenced by the 45-year-old’s sixth-place finish in the poll. He was listed on 19 ballots and tallied 41 points, including two first-place votes.

Rounding out the drivers earning points in the poll were 2012 Rookie of the Year Bub McCool of Vicksburg, Miss., and Clint Smith of Senoia, Ga., who tied for seventh with four points apiece (both received one fourth-place and two fifth-place votes); Chub Frank of Bear Lake, Pa., whose three fifth-place nods earned him three points; and 21-year-old Dillon Wood of New Smyrna Beach, Fla., who was given a single fifth-place vote for one point to stand as the only 2013 Rookie of the Year contender appearing on a ballot.

Lanigan was the leader in the top-winner voting, receiving 20 votes. Richards finished a close second with 16 votes, with Clanton (four) and Fuller (two) the only other drivers receiving recognition in the category.

Media members predicted that the season’s most prolific winner will lead the tour with as many as 14 victories and as few as six.

In the Firecracker 100 category, Lanigan was the runaway choice with 19 selections. He has never won the event but owns a runner-up finish in four of the last five editions.