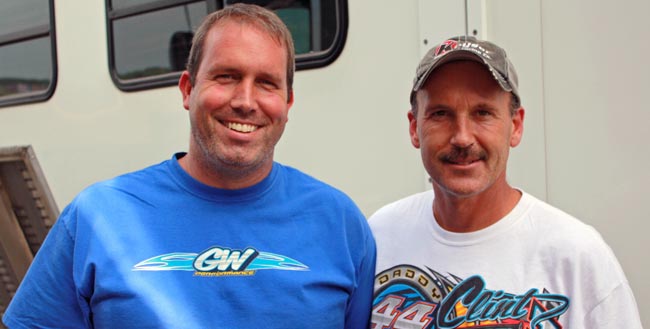 Kennedy’s decision to hire Fuller will provide a huge boost to both the veteran Watertown, N.Y., driver and Kennedy’s fledgling racing effort. Fuller, 44, has struggled to keep his self-owned racing program afloat financially on the World of Outlaws Late Model Series for the past two years, but his ability remains unquestioned and points to a powerhouse pairing with Fayetteville, Ga.’s Clanton under the Kennedy Motorsports banner.

“We’re extremely excited to have Tim Fuller as part of our team,” said Kennedy, a native of the Jamestown, N.Y., area who now lives in Phoenix, Ariz. “His experience as a racer over the years – especially his last six as a World of Outlaws regular – will help take our whole program to a higher level and put us in position for success.

“With Tim and Shane Clanton, Kennedy Motorsports will have two very talented drivers who are proven winners working together. That’s a very exciting situation for any car owner.”

A former DIRTcar big-block Modified champion in his home Northeast region, Fuller has followed the WoO LMS fulltime since winning the national tour’s Rookie of the Year award in 2007. He has finished as high as fourth in the points standings (2009) and owns 12 career wins – including a series record-tying streak of four in a row in ’09 – but he’s winless on the circuit since reaching Victory Lane on June 17, 2010, at Merrittville Speedway in Thorold, Ont.

Fuller’s WoO LMS checkered-flag drought can be directly attributed to his struggles fielding his own team, which he launched after splitting with Gypsum Express Racing early in the 2011 season. With his resources limited, he’s faced a constant battle just to continue following the WoO LMS – a pursuit he nearly called off twice this season.

Actually, Fuller had planned to skip the current WoO LMS ‘Wild West Tour,’ but a last-minute infusion of sponsorship allowed him to make the trip. He was spending an off day on the swing in Deadwood, S.D., on Monday when Kennedy called him with a formal ride offer that he quickly accepted.

“I can’t be more thankful to John Kennedy for this opportunity,” said Fuller, who is currently 10th in the WoO LMS points standings with four top-five and seven top-10 finishes in 22 A-Main starts. “My racing life is saved. My career is resurrected.

“This is like a whole new beginning for me as a dirt Late Model driver. My days of traveling with the Outlaws were numbered, so this not only keeps me on the road but also gives me a fresh start. A new team, a new car, fresh equipment – the stars lined up perfectly for this to happen, and it couldn’t have happened at a better time.”

Fuller will join Clanton, 36, in campaigning Core Construction/Kennedy Partners-sponsored Capital Race Car machines that are built by Clanton and former dirt Late Model standout Marshall Green. Clanton will continue to operate out of his Peach State shop while Fuller will maintain his No. 19 cars in his own garage in Edwards, N.Y., with mechanical assistance from his longtime crewman Eugene (‘Donnie’) Mullany and Ross Robinson, who will remain with Kennedy Motorsports and move north to work with Fuller.

The remainder of the 2012 WoO LMS schedule will be the focus for Fuller, who is scheduled to make his first tour start as Clanton’s teammate on Aug. 1 at Shawano (Wis.) Speedway. But he will also run in other selected special events, beginning with his expected Kennedy Motorsports debut in Lucas Oil Late Model Dirt Series programs on July 25 at Utica-Rome Speedway in Vernon, N.Y., and July 26 at Fonda (N.Y.) Speedway.

“It’s exciting to become a part of a team that is committed to putting the best equipment under their drivers. To get into a Capital Race Car and become a part of what Shane and Marshall Green are building, to be able to bounce information off Shane and help make these cars better – it was really a no-brainer for me.

“I’ve never had an actual teammate before, but Clanton and I have always gotten along well and have always had the same type of goals. We’ll be able to work together and push each other to become more successful.”

Fuller comes to Kennedy Motorsports after Kennedy made the decision to take his longtime friend John Lobb of Frewsburg, N.Y., off the road with the WoO LMS prior to the start of the ‘Wild West Tour.’ A veteran western Pennsylvania-area driver, Lobb served as the operation’s lone driver on the 2011 WoO LMS and continued traveling the circuit this season after Kennedy added a second team for Clanton.

Lobb, 42, experienced a high level of frustration through the first 22 events on the 2012 WoO LMS, prompting Kennedy and Lobb to discuss making changes with the team. During their conversation Lobb indicated that he felt like he needed some time to focus on his kids and be closer to home. Lobb has enjoyed having his 15-year-old son, David, spend a lot of time with the team on the road and at the shop helping out, but David is also very active playing hockey so Lobb wanted to focus some time on that pursuit. Lobb also plans to field a go-kart this summer for his six-year-old son, Mason, who will be cheered on by his biggest fan, little sister MacKenzie, who will turn four this month.

While Lobb’s status as a Kennedy Motorsports driver is uncertain beyond his expected entry in local events over the next two weekends, he remains on good terms with Kennedy and has pledged his continued support to the team.

In fact, while corresponding with Clanton last week, Lobb said he “would like to continue to be a part of making Kennedy Motorsports successful” and offered his input on a potential new addition to the team. Lobb said his first choice to join Clanton as a teammate would be…Fuller.

Clanton, who last month captured the DIRTcar UMP-sanctioned $100,000 Dirt Late Model Dream at Ohio’s Eldora Speedway to become just the fifth driver to win both of the famed track’s crown-jewel events (he also won the World 100 in 2008), is looking forward to collaborating with Fuller.

“I’m excited to team up with Fuller,” said Clanton, who scored his first WoO LMS A-Main win of 2012 and the 16th of his career on July 7 at Deer Creek Speedway in Spring Valley, Minn. “I know Fuller’s takes care of his equipment, he works his butt off, and he’s a proven winner. There’s no doubting his abilities, so I can see us having a lot of success down the road.”