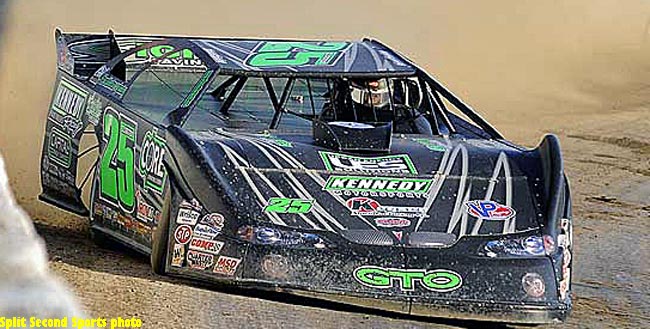 ROSSBURG, OH – Sept. 4, 2012 – Shane Clanton joined a select group of all-star drivers with his victory in June’s Dirt Late Model Dream at Eldora Speedway. He’ll etch his name on an even more exclusive list with another crown-jewel triumph at the famed half-mile oval this Saturday night (Sept. 8).

The World of Outlaws Late Model Series standout from Fayetteville, Ga., has his focus squarely set on capturing the prestigious 42nd annual World 100 – a success that would make him just the third driver to win both of Eldora’s marquee DIRTcar-sanctioned Late Model events in the same season.

“That’s what we’re shooting for,” said Clanton, who seeks to pull off a ‘Big E’ big-race sweep accomplished previously only by dirt Late Model immortals Billy Moyer of Batesville, Ark. (1998 and 2010) and Donnie Moran of Dresden, Ohio (1996). “Winning the World is a big enough deal itself, but doing something that only two of the greatest drivers of our sport have done before would be so cool.”

Clanton, of course, already owns membership in a club of alltime Eldora greats. With victories in the 2008 World 100 and this year’s Dream, he’s one of five drivers to win both races, joining Moyer, Moran, Scott Bloomquist of Mooresburg, Tenn., and Jimmy Owens of Newport, Tenn.

That’s a pretty big deal for a 37-year-old racer who made his first competitive appearance at the blazing-fast high-banked oval in western Ohio just a decade ago.

“To win two crown-jewel races at Eldora – the biggest-paying race of the year and the most prestigious – that means more now that I look back on it,” said Clanton, who has started the Dream A-Main six times and cracked the World 100 starting field on four occasions. “I have people say to me all the time, ‘Wow, you won the World 100 and the Dream.’ Every time somebody mentions your name now, you got that on your back.”

Clanton, who celebrated his 37th birthday on Aug. 29, will also have some momentum behind him when he takes to the Eldora clay for World 100 qualifying on Friday night (Sept. 7). Not only did his last visit to the speedway three months ago result in a $100,000 payday, he’s coming off an $8,000 score in a UFO Series event last Friday night at Tyler County Speedway in Middlebourne, W.Va.

“I feel pretty good about going (to Eldora), especially after the things we learned (at Tyler County),” said Clanton, whose hopes for an even richer victory at Tyler County were dashed when rain washed out last Saturday night’s WoO LMS Black Diamond 125. “(Tyler County) is nothing but a smaller Eldora – you drive it like you do Eldora unless you run dead on the bottom – so we did some things that we did at the Dream and they worked. Hopefully we can carry it over to the World.”

Clanton plans to battle this weekend behind the wheel of the same Kennedy Motorsports machine he drove to victory in the Dream, a Capital Race Car he constructed in a collaborative effort with former Dirt Track World Championship victor Marshall Green. He hasn’t run the car since a WoO LMS event on June 17 at Eriez Speedway in Hammett, Pa., where he blew an engine while leading the A-Main.

Buoyed by a car and a Clements engine he knows works well at Eldora, Clanton hopes he’ll be able to recapture his Dream magic. That was, after all, a special night for him. Entering the Dream he had only recorded a single top-five finish in his previous six weeks of racing, but he was strong from the first hot-lap session to the end of his 100-lap, flag-to-flag triumph.

“I always think I can win every race I go to or I wouldn’t go, but going there (to Eldora for the Dream) I probably would’ve said we had a 50 percent chance to win it,” said Clanton. “When I qualified good and felt pretty good in the heat – I needed to just tighten up a little bit – I felt pretty good going into the feature. Then being on the front row (for the start), being able to dictate the pace of the race, all that fell into place – being up front in the race is way better than being 10th, 12th, 14th. I’m not saying I couldn’t have started back there and won, but being up front is way easier than having to come through the pack at Eldora.

“I think that winning the Dream solidified that we run good at Eldora,” he added. “It’s not like we lucked into it. You do have to have a lot of luck there and have a good car, but we had a really good car. Hopefully we’ll have both again at the World and be up front to be in contention to win both races in one year.”

There aren’t many places Clanton looks forward to visiting more than Eldora. The facility’s whole unique scene gets him jazzed for action.

“When you show up at Eldora, it’s Eldora,” described Clanton. “The atmosphere of the fans is just unlike anywhere else – everybody’s partying and having a good time. I always go there and have a good time on Thursday after going through tech, and then it’s down to business on Friday night and Saturday night.”

A historic Eldora big-show sweep would provide Clanton a towering high to a 2012 season that has otherwise been up-and-down. In his first year driving for Kennedy Motorsports after a decade with car owner Ronnie Dobbins, Clanton currently sits third in the WoO LMS points standings but has only one win on the tour (July 7 at Deer Creek Speedway in Spring Valley, Minn.) and a pedestrian nine top-five finishes in 33 events.

“We’ve been way better than we’ve been the last year-and-a-half to two years, so to not win more World of Outlaws races has been disappointing,” said Clanton. “But there have been guys who have stepped up their program this year. (Darrell) Lanigan has been unbelievable and he’s helped Clint (Smith) a little bit. Josh (Richards) has come back on the scene lately. It ain’t like there are slouches out there.

“I’d like to win 10, 15 races like Lanigan, but it takes your dedication and hard work to do that, and we have a two-year-old car that we’re still steadily working on to make it better and better every day.”

Other WoO LMS regulars with plans to enter the World 100 include:

* Chub Frank of Bear Lake, Pa. He won the World 100 in 2004 and finished third in ’05, but he’s only broken into the event’s starting lineup twice in the last six years.

* Clint Smith of Senoia, Ga. ‘Cat Daddy’ last made the World 100 A-Main field when he scored a career-best sixth-place finish in 2006, but he seems reborn this summer. He was a contender in June’s Dream (finishing sixth) and would have at least a couple of WoO LMS victories this season if not for the red-hot Lanigan.

* Bub McCool of Vicksburg, Miss. The leading WoO LMS Rookie of the Year contender has qualified for the World 100 in each of the last two years, finishing 15th in 2010 and 29th in ’11. This year he will compete with his familiar No. 57J stuck on the doors of a Barry Wright Chassis fielded by Indiana driver Chad Stapleton, whom McCool has developed a friendship after being connected through engine builder Jay Dickens.

* Kent Robinson of Bloomington, Ind. Another WoO LMS rookie, the 24-year-old driver is looking to debut a new MasterSbilt car this weekend. He made his first-ever World 100 start last year, finishing 30th.

The 42nd annual World 100 weekend begins with Thursday’s rigorous tech inspection of cars to assure compliance to DIRTcar specifications and the draw for placement in each of the two rounds of single-lap time-trial runs slated for Friday evening. The top 84 qualifiers will automatically advance to Saturday’s six heat races, while the balance of the 20-car line-ups for those heats will be determined through three qualifying features on Friday; each paying $1,000 to win.

The top three finishers from each of Saturday’s six 15-lap heats, along with the two quickest cars from time trials that did not advance, will move on to the World 100. Heat finishers 4-11 will line-up into one of two 20-lap B-Features that will complete the 30-car starting field.

Although they won’t advance into the World 100, the drivers remaining on the track at the completion of each B-Feature will compete in a 5-lap scramble that pays $1,000 to win and a trip to the historic Eldora stage.

Tickets for the World 100 – reasonably priced as low as $40 for the two-days – may be purchased online at www.EldoraSpeedway.com or by calling the track office at 937-338-3815 during normal business hours. Tickets will also be available the weekend of the race.

Fans can also watch the World 100 live on-line this year by visiting www.EldoraSpeedway.com and pre-ordering a streaming pay-per-view broadcast of the action.