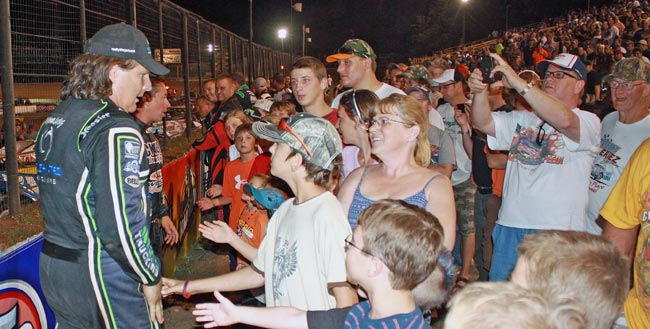 SARVER, PA – May 16, 2013 – After Scott Bloomquist won the Firecracker 100 presented by GottaRace.com for the second time last year at Lernerville Speedway, he spent about 15 minutes meeting with press members in the facility’s media room.

During that press conference the Dirt Late Model Hall of Famer explained, of course, how he won the marquee World of Outlaws Late Model Series event. But he also became an unsolicited promoter of both the well-known four-tenths-mile oval and this year’s seventh annual Firecracker 100 extravaganza, which is scheduled for June 27-29.

“We’ve been coming to this race every year that they’ve run it,” said Bloomquist, who also won the inaugural Firecracker 100 in 2007 and owns preliminary feature victories in 2011 and ’12, “and we’ll keep coming as long as they have it.”

Bloomquist’s descriptions of Lernerville Speedway and the Firecracker 100 following his 2012 conquest read like a list of reasons why fans and racers alike should make plans to usher in the summer with a visit to the western Pennsylvania facility. Consider the positives that the 2004 WoO LMS champion hit on during his post-race comments:

* The magnitude of an event that he has watched grow: “There’s really not any race any better within 300 miles of here. I don’t even know if there’s one better within 400 miles of here. You look at the grandstands and you see how many people come to this event, and you look out in the campground – you just look around here, and it’s all so impressive.”

* The competitiveness of the speedway: “And again, the racetrack – where are you gonna see three-wide racing for a hundred laps? The racetrack is almost a stand-alone. There’s very few places left in America where you can race like you can at this place. You can race three-wide, and definitely two-wide, around this thing the majority of the evening, and that’s all any racer wants – to be able to have more than one lane. Here there are so many options, it’s a joy to come here.

“This place has so many possibilities. I love this racetrack because you can drive it so many different ways. If your car’s not handling, there’s a place on that racetrack where it should handle. You just gotta find it.”

* The driver-friendly track conditions that are a Lernerville trademark: “We didn’t touch anyone (during last year’s race), but even if we did, the track’s so slippery that there’s not enough traction out there to bend anything on your race car. So (with) a little bit of contact, all you do is…everybody just slides a little more or the cars will just break traction a little more. Usually you’ll never damage anything when it’s that slick. That’s one of the reasons we (are not) too concerned about making it three-wide.”

* The laser-focus a driver must maintain to win the Firecracker 100: “You had to be so intense out there to not slide the tires at all and to just be sure you were picking the right groove around the racetrack. I love being in the lead, don’t get me wrong, but leading the race can be taxing on you.”

* The unmistakable buzz in the air that comes from dirt Late Model racing’s superstars placing so much emphasis on winning a mega-money event like the Firecracker 100: “It’s huge. It’s such a big thing. The difference between having a good year, and a great year, is if you can knock off three or four major events…anything 20- to 25-thousand (dollars) and up (to win), those are the races where you make money. This is your true profit in this sport. The rest you survive.

“(Winning the Firecracker 100 is) something that moves you way forward in your personal life. If your racing world needs attention, it’s huge there too. If you’re sitting there on the cusp where you really need another engine or two, or you don’t have the sponsors you really need – then to knock this one off is really huge.”

Bloomquist even loves the off-track activities that are such a big part of the Firecracker 100 weekend. He’s an annual participant in Saturday afternoon’s Firecracker Driver/Fan Horseshoes Tournament, which he proudly won for the first time last year alongside partner Ross Miner of Mill Run, Pa.

“I always enjoy playing (horseshoes) here during the Firecracker,” Bloomquist said after winning last year’s tournament. “This is one of the things that makes the weekend special.”

Advance-sale tickets for the Firecracker 100 weekend are on sale on-line at www.lernerville.com or www.worldofoutlaws.com/tickets. Fans can also call the Lernerville office during normal business hours at 724-353-1511.

Three-day reserved-seat packages are value-priced at $69 for adults and $19 for children 10-and-under – with a free fan pit pass for Thursday and Friday included if purchased by midnight Eastern Time on Wed., June 26. Single-day tickets will go on sale on Mon., June 3, at 10 a.m. ET.

The huge weekend boasts more than just racing. Entertainment includes fireworks throughout the weekend; the inaugural ‘Kick It’ Kickball game featuring WoO LMS and Lernerville drivers on Friday afternoon; a parking-lot concert by the group NoMAD following Friday’s racing card; a Saturday afternoon filled with a driver/fan horseshoes and cornhole tournaments, on-stage driver interviews, the Ms. Firecracker contest and a wienie roast; and a driver autograph session underneath the grandstands prior to Saturday night’s program.